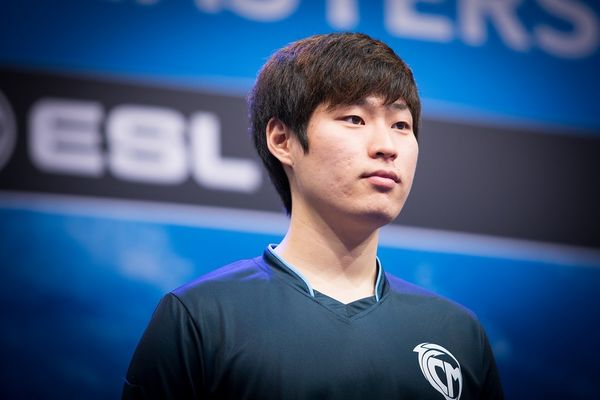 Anyppi is a former Brood War professional, and has appeared in the Proleague for KT Rolster. In January 2012, he announced his retirement from professional Brood War citing a lack of opportunity under the new Bo5 format and contemplated a career change to StarCraft II.[1]

Anyppi has resurfaced as a StarCraft II professional for Incredible Miracle under the nickname "First" in the 2012 Global StarCraft II League Season 2 Preliminaries. He fell to fellow former Brood War pro, HyuN, in the semifinals of his bracket.

On July 20, 2012, First participated in the EWM Season 3 Week 7. First received a BYE in round one and then went on to take down Min, Seal, horror, and asd to advance in to the finals against CoCa. First defeated CoCa by a score of 2-0 and advanced in to the EWM Season 3 Finals where he would have a shot to obtain a Code A seed if he won against the other weekly winners.

First first qualified for Code A in Season 3 of the 2012 Global StarCraft II League, defeating Lucky in the semifinals and Luvsic in the finals of his bracket. First would fall in the first round to aLive by a score of 1-2.

First managed to qualify for Code A in Season 4 as well, beating Reality in the finals of his bracket. First would once again fall in the first round, losing 1-2 to Bbyong.

Requalifying for a third time in a row, First once more made it into Code A in Season 5, defeating Reality 2-1 in the final of his bracket. This time around, First would finally manage to make it past the first round of Code A, defeating SuperNova 2-1 in the Round of 48, and defeating HerO 2-0 in the round of 32, before falling to GuMiho in the round of 24, qualifying for the The Up and Downs of Season 1 in the 2013 Global Starcraft II League.

Here, First would fall back to the first round of Code A, with a scoreline of 2-2 in his Up & Down group. In Code A First once more fell in the first round, losing 2-0 to LabyRinth, falling to Code B a third time.

On July 22, 2012, First participated in the MLG Summer Arena. First was able to do very well in this tournament. Within his bracket, he took down Snute, TOP, PuMa, GanZi, aLive, and LosirA to advance in to the finals to face TaeJa. He lost to TaeJa by a score of 0-2 and ended up taking third place.

On August 24–26, First played at MLG Raleigh, in winners round 1 he lost to IdrA 1-2, then in losers bracket he defeated GoOdy, Hawk, LosirA, Sasquatch and Daisy to advance to the championship bracket with 1st from his group. In the championship bracket he defeated HerO and TaeJa but lost to Leenock in the Grand finals 1-4 taking home second place.

Qualifying through the Korean Qualifier, First attended IEM Season VII - Katowice from January 18 to 20. Here, he would go 5-0 in matches in the group stage, ending with a mapscore of 10-1, and get seeded directly into the quarterfinals of the playoffs, where would meet TLO and win with a scoreline of 3-0, then meet Socke in the semifinals, and win with another 3-0. In the finals, he was matched against Dream whom he defeated 3-1, ultimately winning IEM Season VII - Katowice with a final mapscore of 19-2, taking the first premier tournament of 2013 in dominating fashion.

First once again qualified for Code A, now called Challenger League. He defeated Shark in the first round, but was taken out by Hyvaa in the second round, falling to the Up & Down matches.

In his Up & Down group, First initially won 3 maps with 1 loss. Even then he was tied with two other players, and was only able to qualify for the Premier League after two tiebreaker rounds. In the end, he had defeated all of MarineKing, Hurricane, TRUE and Bang at least once.

Getting to the Premier League for the first time, First started off with a first place in his Round of 32 group, defeating Leenock and RorO. In the Round of 16, First initially defeated FanTaSy and Rain, but was forced into another tiebreaker set when he lost to hyvaa. First was unable to repeat his win against Rain, but instead took down hyvaa twice to advance to the Round of 8 and secure his spot in the next season's Premier League.

In the round of 8, First was swept by Bomber with a 3-0 scoreline, knocking him out of championship contention. However, in the consolation matches to determine the fifth Korean representative in the Global Season Finals, First defeated both Symbol and SuperNova to earn the trip to Europe.

Thanks to winning Katowice, First was qualified for the IEM Season VII - World Championship taking place at CeBIT in Hanover from March 5 to 9. In the group stage, First tied at 4-1 with YoDa and Ret, making it out in third place with his mapscore of 8-5. As a result, he got placed in the round of 12 of the playoffs against none other than Dream. First went on the take this rematch in a similar 3-1 victory, moving on to meet viOLet in the quarterfinals and also defeating the Zerg player with a 3-1 score. Consequently, he joined his 4 teammates in the semifinals for an all LG-IM top 4. In the quarterfinals, he took out YongHwa with a swift 3-0, but in the finals he fell to YoDa, not taking a single map and losing 0-4.