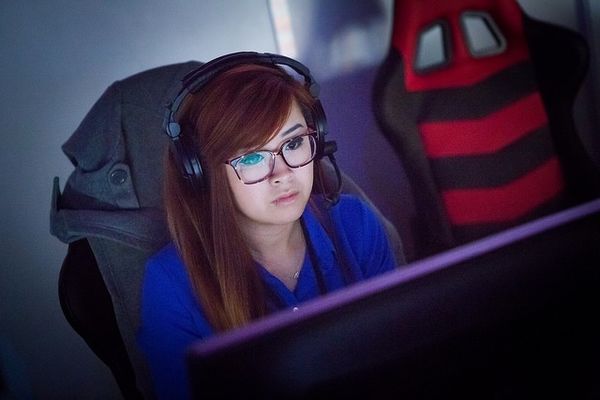 Flo was born in America to Chinese parents from Hong Kong.[1] She got into gaming at the age of ten, watching her older brother play Counter-Strike.[2] She later played Counter-Strike 1.6 competitively for 2-3 years before she switched over to StarCraft II in November 2010, because she felt that Counter-Strike was getting outdated and because she had played Brood War before.[3]

Flo decided to take a year off school in 2012 to focus on StarCraft II.[4] She returned to school autumn 2013 after a full year as a progamer.[5]

Flo switched to StarCraft II in November 2010 and placed second out of 11 players in SC2goesFemale #4 about a month later, beating three other players, but ultimately losing 2-0 to kellyMILKIES in the finals. Half a year later, in May 2011, she won SC2goesFemale #5 in May 2011, this time placing first out of 25 players. She got the chance to beat kellyMILKIES 1-0 in the winners' bracket semi-finals and faced off against Dzejna in the winners' bracket finals However, she lost 2-0 to Dzejna, but fortunately for flo, the format was double-elimination, so she got a rematch as the grand finals and ultimately beat Dzejna 2-1.

In June, flo participated in the first Iron Lady tournament, Iron Lady Champion Cup #1, in which 24 other female players were also participating. She got to the third round of the winners' bracket when she was knocked down into the losers' bracket by sylvanas. Flo pressed on, winning against Nattkatt, but got knocked out of the tournament by CadenZa, ultimately taking 7th place. Two weeks later, however, in July, flo participated in Iron Lady Bunny Cup #1 not dropping a single game, winning the finals against Nattkatt 3-0 and claiming the 2 lb chocolate bunny, which was the trophy of the tournament. Earlier that day, she had also participated in cheekyduck's female-only tournament, CiG Girls ONLY, where she got to the semi-finals by beating Läjten and kellyMILKIES, but losing to Luway who ultimately won the tournament. A week after that, flo tried her hand at Iron Lady again, participating in Iron Lady Champion Cup #2, not dropping a single game, but getting steamrolled by AuRora in the finals, losing 4-0 and taking second place overall. Flo became a member of the female clan PMS for some time in mid-2011, but later left the clan.

The end of July 2011 marked flo's transition into mixed-gender tournaments when she attended her first MLG, MLG Anaheim. She got beat down into the losers' bracket in the very first round by TriMaster, but fought on to the third round of the losers' bracket, when she faced White-Ra and got knocked out of the tournament by him. A while later, flo tried participated in the qualifiers for IeSF 2011 World Championship, but she only managed to win the very first match-up against raKontuR before being knocked out by Sheth and eNigma in quick succession. Later in August, she attended MLG Raleigh, rehashing her run from Anaheim by being knocked down into the losers' bracket in the first round (by scproxima)) and being eliminated entirely in the third round, this time, however, by State.

Flo participated in the third Iron Lady Bunny Cup in September as well, although she only managed to beat TigerLiLee before being eliminated by KTdonut and MaddeLisk. However, since there were only eight participants, that meant she got 4th place. Come October, flo attended the next MLG in line, namely MLG Orlando. Again, she got knocked down into the losers' bracket in the first round (by searlings), but she managed to get to the fourth round of the losers' bracket (although it only included two wins) before being eliminated by Caliber.

In November 2011, Flo attended ZOWIE DIVINA, a female-only invitational tournament in China with 6 invites and a $10,000 prize pool. She managed to reach the playoffs with a convincing 4-1 record in group stage, only losing to ColaGirl. She then narrowly defeated SsQ in the first round, therefore proceeding to the finals against aphrodite. She eventually lost 2-0, therefore taking the second place of the event and $3000, her largest prize money to that date. She also went into a sponsorship deal with Zowie but later discontinued it because she felt it was too restrictive.[7]

One week later, flo attended 2011 MLG Providence, and was again defeated in the first round of the open bracket, this time by Jinro. She was eventually eliminated from the tournament after her loss against a relatively unknown Terran player, pbkim0725, in the third round of the losers' bracket. She was also scheduled to participate in DreamHack Winter 2011, but eventually couldn't attend, and was subsequently replaced by Seala.[8]

On December 22, 2011, flo joined Quantic Gaming [9] and about a month later, in January 2012, she played as a member of the team for the first time when she participated in the female-only tournament Ladies for the win! and winning it by not dropping a single game, until the finals where she beat MaddeLisk, who had beaten her in Iron Lady Bunny Cup #3. A few days later, flo participated in a (gender-mixed) invitational tournament, One Nation of Gamers Starcraft 2 Invitational. She was placed in a group with Sheth, INcontroL and LuckyFool, but did not manage to win against any of them and was eliminated in the group stage.

In March, flo participated in MLG Winter Championship and started off to a better run than her three previous attempts. She beat UnknownReclaimer in the first round and then faced LuckyFool, who had beaten her in the group stage of One Nation of Gamers. She beat him 2-1 and continued on to the third round of the winners' bracket, where she faced BlinG. He beat her 2-0, though, so she got knkocked down to the losers' bracket and was eliminated in her next match there by qapuk, losing 2-1.

In April, flo tried to qualify for IGN ProLeague Season 4. She faced Heavens in the first round of the winners' bracket, but lost 2-0 and was knocked down to the losers' bracket. Although she managed to beat Kukaracha 2-0, she got eliminated in the second round of losers' bracket by binski. The end of April also saw flo's return to Iron Lady. The tournament had changed its time to accommodate players in Korea and Taiwan, but unfortunately, it meant that the tournaments would start early in the morning and flo overslept for the previous two ones.[10][11] She did attend the Iron Lady Leetgion Tournament, though, and had a convincing run, not dropping a single game against Lox and MaddeLisk, until she met Scarlett and was knocked down to the losers' bracket by a 2-0 loss. There, she faced Spyte and defeated her 2-0, but got eliminated from the tournament by Eve, taking 4th place overall. The next day, flo attended SoCal eSports LAN Circuit 2012 - Mission Viejo, but got eliminated by Ajax 2-0 in the first round of the winners' bracket. Although she beat pHillniT and onemanarmy, she got eliminated by smiLe in the third round.

In May, flo attended MSI Battlegrounds, beating OpTiKRiddles, but losing to State, who eliminated her in MLG Raleigh and getting knocked down to the losers' bracket. There she faced and defeated Deffex, but got eliminated in the third round by fabintegral. In June, she participated in MLG Spring Championship, but didn't manage to take a single game, being eliminated straight out by Veritus and Sanddbox. During the summer, flo moved into the Quantic Gaming gaming house[12] and the next MLG, MLG Summer, she managed to beat Aucamazn and get to the third round of the losers' bracket before losing to Ryze. In the losers' bracket, she then faced Insur, but lost 2-0 and got eliminated.

Quantic Gaming's gaming house, seemed to give results, though, as MLG Fall came up. Flo beat Iron in the winners' bracket, but was no match for MC who knocked her into the losers' bracket. There, however, she 2-0'ed DoubleTapSC2, Dox and Fenix before facing iNcontroL in the fourth round of the losers' bracket. Clearly the underdog, flo nonetheless managed to win the first game against him, but iNcontroL did a comeback and eliminated her 2-1 in the fourth round.

Flo's partnership with Quantic Gaming, however, would not last and she was left teamless in December 2012, when Quantic Gaming abruptly disbanded.[13]

2013 - Personal sponsorship with Need for Seat[edit]

After Quantic Gaming disbanded, flo continued streaming and on February 16, she was personally sponsored by Need for Seat.[14]

For 2013, MLG decided to stop having open brackets and as such, flo did not compete in 2013 MLG Winter Championship. She did, however, compete at Dreamhack in Stockholm a month later.

At 2013 DreamHack Open: Stockholm, flo was put in Group C alongside elfi, Adelscott and a British Random player Gowerly, from which two players would proceed to the next group stage. Her first matches were against elfi, but she was not able to win against him, although the first game was very close. Flo then went up against Adelscott. She managed to take the first game, but Adelscott made a comeback and ultimately won 2-1 against her. Flo then beat Gowerly 2-0, but so did elfi and Adelscott, too, so it did not matter much and flo's first run in Dreamhack was cut short at the first group stage.

Early June, flo tried to qualify for HomeStory Cup VII. She got past auto in the Ro128, but lost 0-1 to LzGaMeR in the Ro64. In late June, flo participated in the MLG Spring Championship open bracket, where she played TOdesKaMpF in the first round, but lost 2-0. She then defeated sleet 2-0 in the first round of losers' bracket but lost to Ostojiy in Round 2, ending her run.

In July, flo played in Battle of the Sexes, a showmatch against TaKe, sponsored by Need for Seat and casted by RotterdaM. It was a "Bo7o3", and the winner would be the first to win two Bo7's. The first Bo7 was played on July 21 and after seven close matches, TaKe won 4-3.[15] The next Bo7 was set for a week later, on July 28, and flo really upped her game for that, winning 4-1 and taking the showmatch series to the final and decisive Bo7.[16] The final Bo7 was set to take place right after Acer Teamstory Cup Final Day 1, on location in Germany, on 17 August.[17] Flo won the final Bo7 with the score 4-2, resulting in her winning two out of the three Bo7's and becoming the winner of the showmatch series.[18]