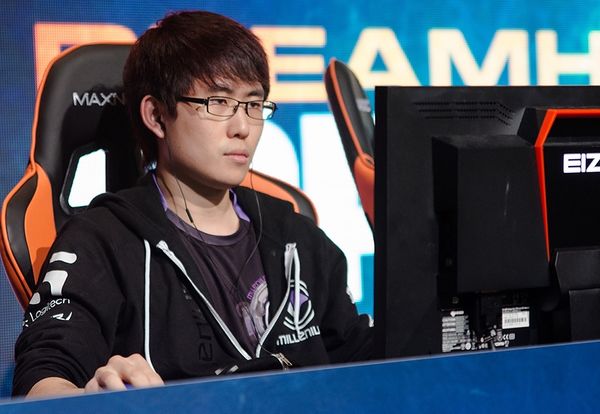 During his Brood War career he was well known under the ID fOrGG. Upon switching to StarCraft II and joining Old Generations he used the nick Fin. He changed his ID to ForGG upon joining Millenium.

ForGG played Brood War for Lecaf Oz and KT Rolster. His greatest successes include winning the 2008 Arena MSL (solo), the 2007 Shinhan Proleague with Lecaf Oz and the 2009-10 Shinhan Proleague with KT Rolster. He retired on 28 December 2010. On 30 September 2011, it was announced he would be joining oGs.[1] On the 27th of June 2012, it was announced that he joined Millenium.[2]

ForGG made his debut in the South Korean pro scene in the ESV TV Korean Weekly 12, where he took out Terius, Heart, Lots and Jjun before being defeated by AnNyeong in the semifinals.

On October 13, 2011, ForGG participated in the ESV TV Korean Weekly Season 1 Weekly 12. After taking down Terius, Heart, Lots, and Jjun, ForGG went on to face AnNyeong. He was not able to advance any further after he lost to AnNyeong by a score of 1-3 and fell in to the 3rd/4th place match. He was able to defeat Min by a score of W-0, and was able to take third place.

ForGG made it into Code A of GSL November through the qualifiers, where he made his GSL debut.[3] In the Round of 48, he defeated Sage 2-0 and advanced. ForGG defeated Polt 2-0 in the Round of 32.[4] He faced July in the Round of 24 (a match-up of former Brood War champions) and won the series 2-0, securing a Code S spot.

ForGG made his debut in Code S in GSL 2012 Season 1. Despite his domination in Code A last season, ForGG would end up placing last in his Code S group losing to both Leenock and MC to drop him back down to Code A.

His transfer to Millenium was announced on June 26, 2012, live on Millenium TV. He joined a European gaming house to be able to participate in foreign tournaments like DreamHack or the LAN Assembly. He had to cancel his participation in Code S to fly to France, as well as forfeit his Code A match against his friend and former team mate TheStC. Ironically, they would meet twice in the following months, during Assembly Summer 2012 and Dreamhack Valencia.

ForGG has literally harvested a lot of European tournaments during Summer 2012. His first event offline under the colors of Millenium was the Assembly Summer 2012. He passed the first and the second group stages, only losing to Moon, then went to face TheStC, in a remake for history of their missed code A match. He was able to beat his former teammate 3-2 on a close series. He was defeated in semifinal by TaeJa, the undefeated beast of this summer. However, he took his revenge against Moon, inflicting him a crushing defeat on the score of 3-0 and taking the 3rd place.

ForGG's next event was IEM Cologne. Despite a good second place in his group stage (ahead good players like SortOf, Inori and PuMa), he got crushed in the quarterfinals by the rising zerg from Spain VortiX 3-0.

One week later, he was in Berlin for the Campus Party Europe alongside with his teammate Feast, which was attended by strong players like SuperNoVa, Snute and Ret. He was able to reach the fourth place, losing against the winner of this tournament SuperNoVa and the runner-up Snute.

The peak of his trip was reached at the Dreamhack Valencia. He made a very impressive run to the finals, taking down his former teammate Stephano, with an epic come back in the game two. He was stopped 3 to 2 by his nemesis TaeJa (who was in a hot streak at this time) in a close series, despite an early 2 - 0 lead. But thanks to his second place he earned a spot for Dreamhack Winter 2012.

His next offline event was the ESWC 2012, on the beginning of November. He didn't drop a single game in his group stage, and reach the final by losing only one game against Harstem. He was looked as the favorite against MaNa (who did surprisingly beat Stephano in the semifinal). Unfortunately, he was sharply defeated 2 -0. For the second time in two consecutive events, he fall in the final, making a similitude with the French cyclist Poulidor.

ForGG had a disappointing Dreamhack Winter 2012, falling in the group stage after loss against NaNiwa, HerO and ThorZaIN. He also had to return to Korea due to visa issues, and was not able to participate to the Numericable M-House Cup despite having earned previously a spot. Back in Korea, he didn't attempt to requalify for code A, and mostly trained for Heart Of The Swarm, showing his skills in the game by not losing an single map on the 4 series he played at the Iron Squid 2 King Of The Hill.

He made his come back in Europe during the month of February, returning in the Millenium's gaming house. He qualified himself for the ESET UK Master 2013 season 1, beating Shew, Fuzer and Strelok without dropping a single game. He also signed 2 all kills against Team PrOperty and Fnatic in the Cascade Clan League Season 4.

On November 25, 2015 ForGG announced that he was going to head back to South Korea[5] and just a week later he announced to be leaving team Millenium[6] after more than 3 years.

On March 11, 2016, ForGG announced on his YouTube channel that he would be going into military service for one year and nine months starting on May 3, 2016.[7]