Force Field is an offensive/defensive spell cast by the Protoss Sentry. When cast, the temporary Force Field will block the movement of any ground unit (Massive non-hallucination units and Corrosive Bile will destroy it). Each Force Field lasts for 15 seconds.

The effective use of Force Field can be divided into Choke Play and Open Field Play.

Defensive Choke Blocking: This is when you use Force Field to defensively block a choke, often your own ramp. It's useful to do this when you don't have enough units to fight the enemy. If you can sense the enemy moving in, you Force Field a choke to prevent them from entering. If you time this Force Field right, you can actually split your enemies forces in half, trapping some of them near your forces where you can kill them. Alternatively if they plan to retreat while fighting you, you can force field a choke area to force them to fight you. 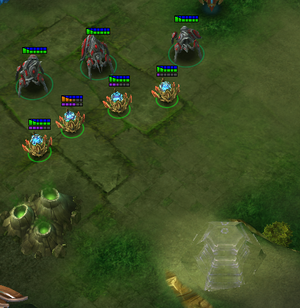 A Force Field placed on a ramp to contain the opponent.

Offensive Choke Blocking: This is when you use Force Field to block your opponent's choke. It's useful to do this when you're attacking your opponent's natural expansion. Force Fielding your opponents ramp prevents reinforcements from arriving from his main base, and prevents the opponent from retreating any forces he has at his natural back up into his main. You can also offensively block your opponent's ramp while harassing with a Warp Prism to prevent your opponent from moving his forces between bases, blocking him from dealing with your harass. These tactics aren't limited to ramps; they can be used on any kind of choke, but using them on ramps is the most typical application.

Protecting Flanks: You use Force Field to block your army's flank. It prevents your opponent from easily getting into your backfield and limits your opponent's ability to surround you. This can create a nice choke for your Zealots.

Dividing the Opponent's Army: By dividing your opponent's army at odd angles with Force Fields you can take advantage of his lack of coordination and poor ability to focus fire. This technique can also force an engagement if it manages to trap some of the opponent's forces.

Channeling the Opponent's Army: You can force your opponent through a small area, making it difficult for him to get a good arc and giving you a positional advantage.

Preventing the opponent from kiting: By Force Fielding behind enemy units, Zealots will be able to close and deal massive amounts of damage. The enemy units will not be able to kite the Zealots and must take maximum damage from the Zealots.

Force Fields after the early game become less useful as more Massive units make it to the fray such as Archons and Colossi. Blink Stalkers will also mitigate the power of Force Fields by ignoring positional disadvantages.

When fighting against a Terran opponent, Force Fields are essential for early game to late mid-game defense. Because of Concussive Shells and Stim, Zealots will be unable to hit MMM very much since Marines and Marauders will Kite them forever. Because Zealots are needed to kill off pushes, Sentries need to assist the Zealots by Force Fielding behind MMM forces in order for Zealots to deal significant damage.

Force Fields are extremely powerful for protecting bases and units. Combined with a good building placement, Force Fields will prevent Zergling from flooding a base and Roaches from getting past defenses.

Against masses of Zerglings, Force Fields can be employed to save fragile ranged units like Stalkers, Immortals, and Sentries. By surrounding one's small army while leaving small chokes for Zealots to engage, a Protoss player can create a temporary "bunker" where the Zerglings cannot attack.

Roaches suffer more from Force Fields than other ranged units due to their short range of 4. Roaches cut off from a Force Field wall are extremely unlikely to shoot anything past the wall, making Sentries much more devastating to Roaches than they appear. Force Fields can also be used to prevent Roaches with Tunneling Claws from burrowing with the addition of more Force Field walls.

In Combination with Other Spells and Abilities[edit]