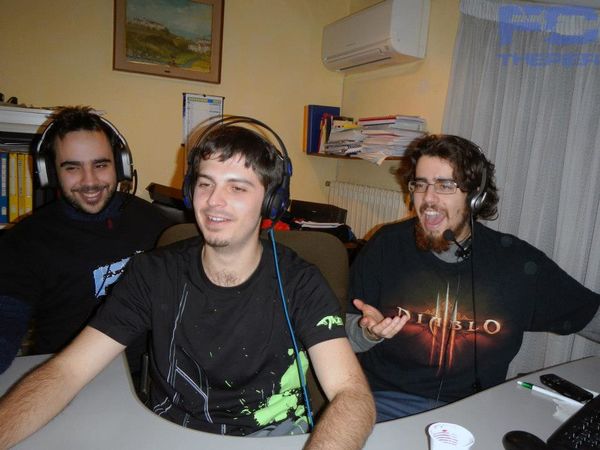 Alessandro "Foyerback" Francesconi, Marco "Desa" Rossi, Francesco "Dartilus" Acampora are the three creators of the channel Foyercraft, a Italian caster group on YouTube born at the end of May 2011. They live in Tuscany, Italy.

Started playing early in the Beta, but mostly sticking to low-level 3v3 games.

In May 2011, they created their YouTube Channel, gaining a little fame in the Italian SC2 scene with the replay casting of some popular tournaments (Dreamhack, MLG, ASUS ROG, Blizzcon).

They cast in livestream some minor Italian tournaments and many clan wars. In collaboration with StarcraftWorld, they ran TheForumWar with more than 400 Italian players. At the end of October 2011, the Foyercraft Team was invited at the ESL Tournament at Lucca Comics & Games 2011.[1]

In November 2011, they start working on Strategy Guides in Italian on Liquipedia: Strategia Protoss. However, the article has been deleted since Liquipedia has stopped supporting articles in language other than English.

They had several weekly series, showing every aspect of StarCraft II multiplayer:

They participated in mostly all the beta phases of Blizzard's new games: Diablo III, World of Warcraft: Mists of Pandaria, StarCraft II: Heart of the Swarm, Hearthstone.

In March 2013, after participating in the Heart of the Swarm beta phase, Foyerback managed to participate in the 'Global Swarm Invasion' at Versailles.

In August 2013, they started making videos on the beta phase of Hearthstone, the free-to-play Card Game by Blizzard, with some beta keys give-away.

Besides Blizzard games they enjoy making videos on other games, especially on League of Legends with Foyerback and his friends. They are also well-known thanks to their random live videos made to celebrate an event (getting 1,000 subscribers on their YouTube channel, Foyerback's voyage to Versailles)