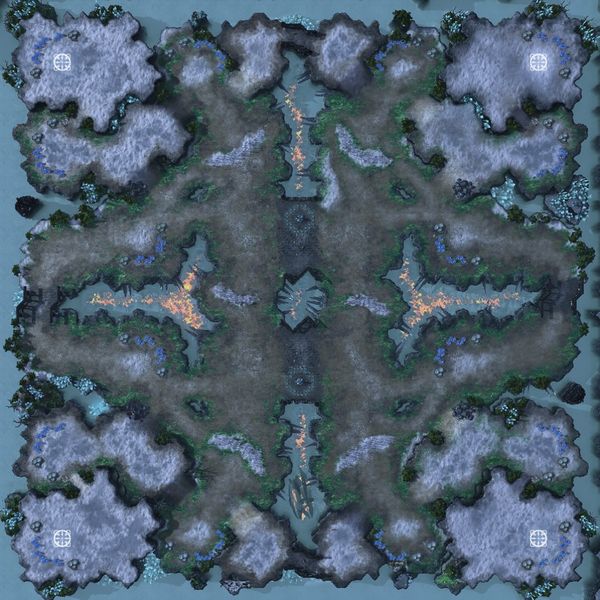 Frost is a 4 player map player created by Semmo of Team Crux. It was the winner of the Team Liquid Map Contest #2[1], and had its premier tournament debut in the 2013 MLG Spring Championship.[2]

There are two watch towers on this map which control the center.

The unique architecture of the map allows close spawns and cross spawns to have similar rush distances.

All three types of spawns will provide for slightly different games and expansion patterns.

There are two choices for third bases and players will choose which one to take based on their race, their spawn position and their opponents spawn position; both locations are viable in certain situations.

The third bases near the 12 and 6 o'clock positions are easily assailable from the overlooking high ground. This expansion would be a poor choice for Zergs should they spawn horizontally from the other races. However, Terran and Protoss may use it as a staging point for attacks.

The third base near the middle of the map opens the player to attacks and counterattacks from many directions and is especially vulnerable to air harass due to the dead space overlooking the base.

Both third bases are rather spread apart from the main and natural, which could open up a lot of harass and drop play.