Fungal Growth (or Fungal for short) is an offensive area of effect spell cast by the Zerg Infestor. Upon casting, a projectile launches and slows all enemy units within the area of effect when it lands, dealing 30 damage over 3 seconds. Fungal Growth inhibits the use of certain escape abilities (Stalker's Blink and Battlecruiser's Tactical Jump), and prevents units from being picked up by a transport (Medivac, Overlord, or Warp Prism). Units affected by fungal can still fight back and use their other abilities.

Fungal Growth is an extremely versatile spell, allowing the Zerg player to dictate the battlefield positions in a similar manner to the Sentry's Force Field spell. For economic harassment, two Fungal Growths will kill any worker units. When used for positioning, Fungal Growth forces the opposing player to hold their ground until the effect expires, or risk splitting their army. This provides the casters army a brief time frame to jockey for a superior position. When Fungal Growth is employed for defense, it can block enemy forces from passing through choke points or ramps. In addition, it is extremely effective at limiting aerial harassment, especially against larger groups of clumped flyers. Fungal Growth can also be used to slow down advancing units, allowing the Zerg player to buy time for hatching units or upgrades to finish, or to soften up an army prior to confrontation. 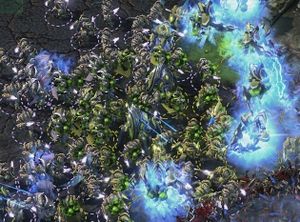 Infestor energy use in ZvP is balanced between Fungal Growth and Neural Parasite, varying on the army composition of the Protoss player. Fungal is more effective against larger Gateway-based armies, especially ones that are Zealot heavy, because the immobilization removes the benefit of Charge, and limits their ability to act as damage absorption. Fungal Growth also loses some of its harassment effectiveness in ZvP, because of the fast shield regeneration of Protoss units.

Fungal Growth is extremely useful against fast Protoss air units, specifically the Phoenix and Void Ray. Against harassing Phoenix, the spell can hold the unit at range while ground-based attackers deal damage, or it can stop a group of Phoenix from entering a worker line. 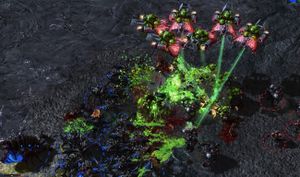 In ZvT, Fungal Growth is extremely effective against bio armies (composed of Marines and Marauders), and has limited use against other styles of play. There are three main reasons for its effectiveness against Barracks armies. First, it allows the Zerg player to punish Stimpack use by backing off once the bio force is immobile. This causes the Terran army to take Stimpack damage, combined with Fungal Growth's damage over time. Second, it holds the Terran army in place, maximizing the damage of splash units like Banelings and Ultralisks, and removing the speed advantage and kiting ability that Stimpack provides. And third, it gives the Zerg an easy way to burn through Medivac energy.

Against certain unit combinations Fungal Growth also provides range control, allowing the Zerg player free damage. Against a bio army that lacks Siege Tank support, Fungal Growth allows Hydralisks with Grooved Spines to attack with minimal reprisal from the Terran player. Regrettably the spell loses some of its viability against Mech/Biomech armies because of Siege Tank range and Mech unit health, which causes the Infestor's other spells to take priority. Against Terran air, Fungal Growth can easily shut down Banshee harassment, and can also be used to protect Overlords from Viking harassment. Despite the tendency of Battlecruisers to stack while attacking, their high health limits the damage caused by Fungal Growth. Fungal Growth can also be used to stop drops before they enter the Zerg base, destroying all loaded units when the Medivac dies. 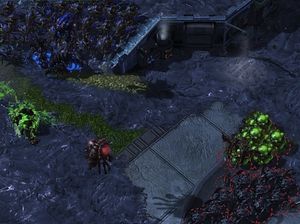 Fungal Growth can be used in Roach vs. Roach battles to immobilize a group of enemy Roaches, trapping Roaches in the backfield and preventing an enemy from forming a good concave at the start of the battle. It can also be used to stop Mutalisks from eluding your army or commuting between your mineral lines. 4+ Fungal Growth can also kill multiple Mutalisks (120HP) on their own, should you have no other Anti-Air capabilities.

LiquidTLO vs SEN game 2 at Blizzcon. TLO kills a worker line with 4 FG's.