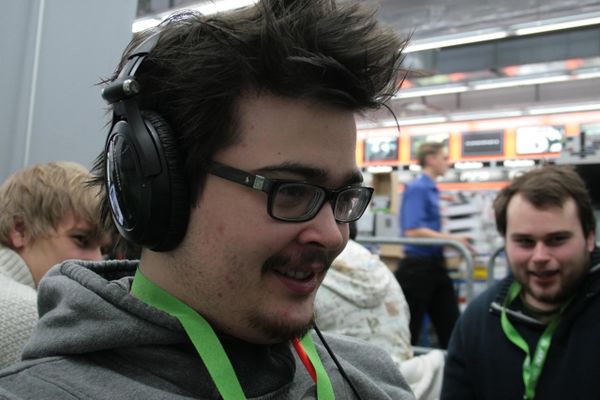 In 2019 he returned to StarCraft after a long hiatus.


Samuli Romppanen is considered to be one of the best players players in Finland, even though he doesn't hold any titles to his name. Samuli has a flamboyant personality which has earned him many fans.[1]

Fuzer started playing Warcraft III at the age of 14, he played it for around 4 years during high school. Eventually he became bored with Warcraft III and stopped playing games actively for a while. Fuzer performed his military service, which is mandatory for men in Finland, between the years 2009 and 2010. During this time Samuli bought a beta access key for StarCraft II Beta and started writing a blog titled "Fuzer wages war, gambles and destroys!!!" in which he wrote about his daily life and progress in the game. He started playing from the ground up, starting from the lower leagues. During his years in the military he attained the military rank of corporal.[2] In August, 2012, Fuzer went to stay at the Ministry of Win -house for three months. His plan was to train intensively, but left early, being unhappy with the way the house operates.[3][4] Before this Samuli applied to a university of applied sciences, but was not accepted as a student.[5] It is uncertain whether or not Samuli is planning to apply again, possibly after his trip to USA where he will be staying in the Razer -house.[6][7]

Fuzer was a staff writer for the Finish StarCraft II news site StarCraft2.fi.[Citation needed] In April 2011, Fuzer left his long-time team, Menace, after his contract expired. Four months later he joined eXelon Gaming, but left in 2012 before its disband due to disagreements with the organization.[8] In December 2, 2012, Awesome Gaming announced that Fuzer had joined the team.[9]

Fuzer played in various weekly tournaments, like the ZOTAC Cups, ESL Viking Cups and Go4SC2 cups, and many times managed to reach the finals or semifinals. He also won the Playhem Masters/GM daily over a South Korean Protoss ReaL.

Fuzer is known for unorthodox playstyle, especially utilising lots of proxy barracks builds. While practising and streaming in the MoW house early September 2012 Fuzer helped SjoW refine his proxy 2 barracks play, who was also practising in the house.[10] January 9, 2013, Fuzer released his very own replay pack called "The Art of 2Raxing" in which he beats players like Stephano, Nerchio and BabyKnight by only using the double proxy barracks opening.[11]

Fuzer qualified for the 2012 WCS: Finland Nationals through the online qualifiers. In the first round of the main event Fuzer lost to elfi by a score of 0-2. In the losers bracket Fuzer made short work of Tropic, Namutin and core, winning all three matches without dropping a single game. In round 4 Fuzer was put up against Protosser, who won Fuzer by a score of 2-1 resulting in Fuzer dropping out from the tournament.

The Ministry of Win incident[edit]

In August, 2012, Fuzer moved to the Ministry of Win -house in Poland so that he could concentrate in practicing StarCraft II. Things turned out to be different from what he had expected, so he posted a topic on the TeamLiquid forums which ended up receiving hundreds of pages in responses. In the post Fuzer explained his situation after having stayed at the house for a few weeks. Fuzer had agreed on Skype that he was to stay in the house for 3 months and pay around €600 for his stay. When Fuzer got his hands on the contract he became suspicious and wanted to send the contract to his lawyer in Finland before signing it, being worried that he might not understand it fully, as English is not his native language. In response the boss of the house demanded to see verification of the competence of the lawyer or he would not share the contract. After this Fuzer was told that he had to sign the contract by the end of the day or he would have to leave the house. Samuli kept telling the boss that he could not sign the contract until it had been checked by his lawyer. After this Samuli decided to leave the house. Hoping to get a refund of the remaining month he had already paid for he contacted the boss. A Skype conversation between Samuli and the boss can be found in the post. Essentially the boss of the house said that as there is no contract, he doesn't owe Fuzer any money after which Fuzer posted on his Facebook wall in order to spread the word of what had happened. Soon after the boss asked for Fuzer's bank account so that he could transfer the payment to Samuli. Fuzer decided to spread the word anyways, stating the following: "I know I may lose the money but atleast I can do something for esports and reveal some things aren't as nice as you may think". Fuzer lists many flaws in the contract: a player who comes to live at the house needs to stream for MoW for a total of 150 hours a month, which is 5 hours a day, and that MoW is entitled to have a cut from the stream revenue. The contract also stated that after a player who has spent his/her time in the house is not allowed to establish a house of his/her own, or be part of another gaming house as a coach or any similar activity. Not everything was bad in the house, however. Samuli thanked the players for creating an amazing atmosphere and said that the computers worked well, along with a few other things.[12]

The full thread can be found here.

On May 10, Fuzer announced that he was leaving his current team, Awesome Gaming,[13] and joining a new one. On June 9,, Fuzer's new team is revealed - he rejoined his old team, Team Menace.fi.[14] However, soon after this Fuzer had decided to retire from competitive gaming to return to his studies.[15]