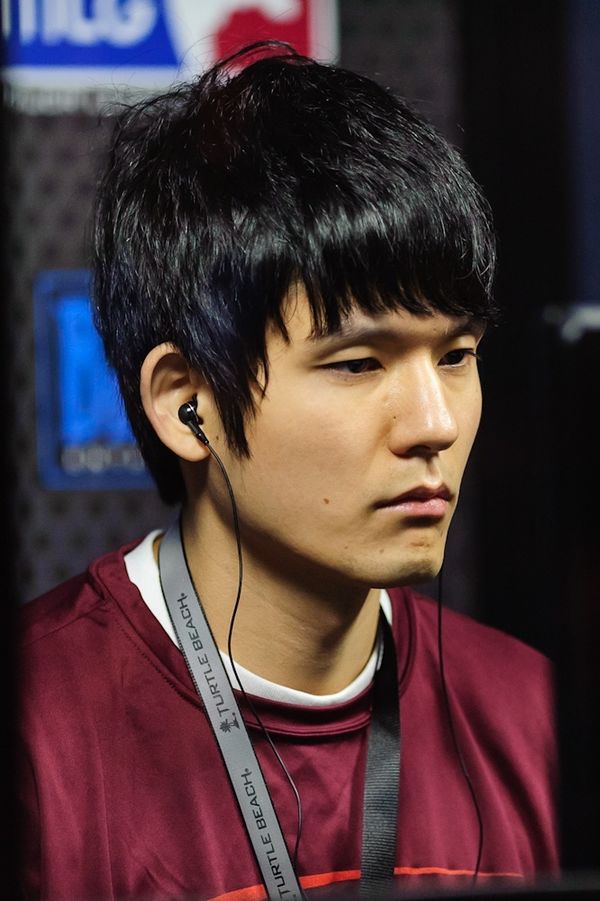 In Brood War, he played for Woongjin Stars.

GanZi was originally part of IM but joined SlayerS shortly before 2011 GSL March. On March 13, 2012, it was announced that he left SlayerS alongside TaeJa.[1][2]

On December 10, 2012 it was announced that he had left compLexity, having joined them since leaving SlayerS.[3]

GanZi managed to Qualify for Code A in March and reached the Ro16 by beating HayprO, He then lost to Virus remaining in Code A, In GSL May he lost in the Ro32 in a close series to Nuts. In GSL August, GanZi had a strong run through Code A, eliminating BanBans, FruitDealer, Check and TaeJa before meeting and beating MarineKing 4-3 in the finals. On his way to the finals, he only lost one game to BanBans. Due to his win, he was granted Code S for the upcoming season.

He played in the 2011 GSL November after being dropped down to the Round of 24. He would defeat Lucky 2-1 to regain his Code S spot.

After getting knocked out of Code S in Ro16 in 2011 GSL Season 1, Ganzi had to face HerO in the RO24. He lost 0-2 and will have to try to qualify for Code S through the Up & Down matches.

GanZi's first time in Code S took place during GSL October. His Ro32 group consisted of the following players: July, HongUn, and LosirA. He came out top of this group with 2 wins and 0 losses moving him into the Ro16. In the Ro16, he faced off with Leenock who he won against 2-1 taking him into the Ro8 where he would meet SuperNova. Defeating him in a close series 3-2, GanZi went on to face Mvp, the defending champion, going down 1-3. This also made him the first SlayerS player to advance to the semifinals of Code S despite GSL October being his first appearance in the competition, his teammate MMA would also qualify for the other semifinals the following day.

During the 2011 GSL November tournament, he would make it out of the Round of 32 after claiming 1st with the score of 2-0. In the Ro16 he did not fare well. He was defeated twice by both Protoss players Puzzle then MC. He would fall down to Code A for the rest of the season.

GanZi made it through the Round of 32 at the top of his group, defeating jjakji and BoxeR to advance. In the Round of 16 GanZi was grouped with PartinG, MC, and, once again, jjakji. GanZi lost 2-0 in his matches against MC and jjakji to fall down to Code A.

On May 18, 2011, for the 2011 GSTL May, SlayerS sent out GanZi as their second player against fOu. The score was in favor for fOu at 1-0 at that point. GanZi was able to defeat Leenock and Choya and brought the score in favor for SlayerS at 2-1. fOu sent out GuMiho next and GanZi wasn't able to defeat him. GanZi's loss allowed fOu to tie up the score at 2-2.

On May 19, 2011 for the 2011 GSTL May, SlayerS sent out GanZi as their fourth player against MVP. The score was tied at 3-3 for both teams at that point. GanZi was able to defeat GuineaPig and brought the score in favor for SlayerS at 4-3. MVP sent out DongRaeGu next and GanZi wasn't able to defeat him and allowed MVP to tie up the score at 4-4.

On June 23, 2011, for the 2011 GSTL Season 1 Group A, SlayerS sent out GanZi as their fourth player against MVP. The score was in favor for SlayerS at 3-2 at that point. He wasn't able to take out MVP's DongRaeGu and the score became tied at 3-3.

On July 14, 2011, for the 2011 GSTL Season 1 Group A, SlayerS sent out GanZi as their final player against Team SCV Life. The score was in favor for TSL at 3-2 at that point. He wasn't able to take out TSL's Killer and SlayerS lost with a final score of 2-4.

On August 4, 2011, for the 2011 GSTL Season 1 Group A, SlayerS sent out GanZi as their third player against Prime. The score was in favor for Prime at 2-1 at that point. He wasn't able to take out Prime's HongUn and SlayerS went down by two games by a score of 1-3.

On August 25, 2011, for the 2011 GSTL Season 1 Group A, SlayerS sent out GanZi as their starting player against oGsTL. GanZi took out Cezanne and put SlayerS ahead by a score of 1-0. oGsTL sent out SuperNova next and GanZi wasn't able to defeat him and allowed oGsTL to tie up the score at 1-1.

It was announced on July 11, 2011 that GanZi would be going to MLG Anaheim to participate in the open bracket.[4] There, he battled through the Open Bracket and made it into the Pool Play. In Pool Play, he placed second in his group under Mvp. In the Championship Bracket, GanZi went through Ret, HuK and Rain before being stopped by his teammate MMA 2 - 1.

GanZi would not go to MLG Orlando, instead a few months later going to MLG Providence. There he would battle in the Open Bracket. He had a good run until he faced off Gatored and lost 0-2. He fell to the Losers' Bracket where he would defeat teammate Puzzle but lose to Oz one round before the Open Losers' Bracket Final.

GanZi participated in MLG Winter Arena 2012 as one of the top 8 in the South Korean qualifier. He would get immediately knocked out of the Winners Bracket in a 1-2 loss to DongRaeGu. However he would make an unexpected run in the lower bracket by defeating Pomi, Socke, Mvp, and MC. GanZi was finally defeated by viOLet 2-0 in Round 5, finishing 7th/8th overall, qualifying him for 2012 MLG Spring Arena 1.

On May 26, 2012, GanZi participated at the Red Bull Battlegrounds, where he went 0-3 in the group stage, finishing the tournament in 13th-16th place.

On December 10, 2011, GanZi was invited to participate in the IPL Fight Club. His first opponent was Sheth. GanZi defeated Sheth by a score of 5-3 and took his rightful seat at top of the throne.

On December 17, 2011, GanZi faced his next opponent for the IPL Fight Club, Kas. GanZi defeated Kas by a score of 5-3 and remained at the top of the throne.

On January 14, 2012, GanZi faced his next opponent for the IPL Fight Club, MaNa. This was where his streak ended as he lost to MaNa by a score of 4-5 and allowed MaNa to overthrow him.

On August 7, 2013, GanZi announced his retirement on his twitter.[5] In a second tweet he explained the reason for his decision : "Can't recovery for my wrist." [6]