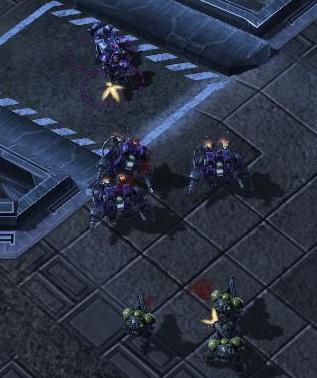 This build starts with a fast Ghost Academy to rush the opponent while the opponent Terran's army is made up of Marines and Hellions which can be quickly disposed of taking advantage of Snipe and the Ghost's extra damage to light units. After the Ghost poke, you can safely transition into standard play while staying safe from any all'ins and Banshee openers. While an effective build, it is also very expensive and meaning that as the game transitions into the midgame, the Ghost rushing player may be playing from behind with Ghosts that do not have any specific or strong later game use in TvT other than snipe drops.

With the reduction in snipe damage from 45 (enough to one-shot a Marine) to 25 following patch 1.4.3, the build is no longer viable.

The primary goal of this opening is to expand and tech safely behind an early Ghost timing attack. Dealing damage is secondary objective as even though it is likely that one will be able to pick off a few Marines or SCVs, damage is not guaranteed. The attack is not an all-in but is simply a very effective way to exert pressure on fast Tech or economy builds. Following the attack, you can comfortably transition into standard or Bio play moving into the midgame.

The build is very safe against a vast array of openings, as well as early aggression, a Marine/SCV all-in for example, as the Ghost is strong against many of Terran's early units. 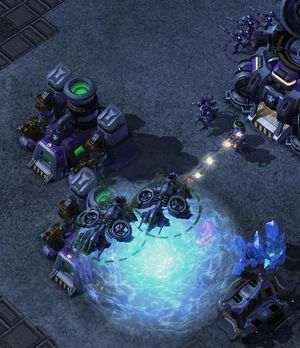 After EMPing the Banshees... 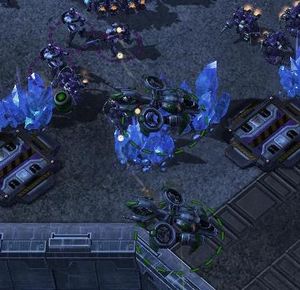 ...the Ghosts are free to pick them off.

While your attack is happening, get a Command Center as you will be relatively safe from anything the opponent can counter you with. From here, you can safely transition into standard Marine/Tank play, take the more risky Bio route, or whatever else; it's up to you!

The main strength of the Ghost in the early attack is how easily you can take down SCVs and Marines. Using Snipe, you can easily take out 5 or more defending Marines if they are down the ramp. Do not try to push up a ramp with more than 5 Marines at the top. If you have killed all the Marines, heading to the mineral line and start harassing the SCVs is risky, and be aware of how easily you can be surrounded. You can also build a Bunker here if you choose. Best case scenario, you will encounter a wall and only 3 Marines at the top. Quickly dispose of the Marines and start taking out a Depot, sniping any SCV's that come to repair. Make sure to leave by 6:00 if the Terran is opening with Banshees, as the first Banshee that comes out at 6:20 will destroy your push, making it much harder for the Ghost-ing player to defend against cloak.

Ghosts can use the Stutter Shot technique. As the attack animation starts (dealing damage) you immediately click move and advance your Ghost to the enemy, immediately firing again when the attack cooldown runs out.

Depending on what you scout with your Ghost push, there are a variety of necessary responses to prevent a build order loss. Other than these specific openings a Ghost-ing player is relatively left to their own devices after the push.

This is a common build to scout. Simply pull out by 6:00 and construct an Engineering Bay for 3 turrets if cloak is confirmed, one in each mineral line and one near production buildings. Favor a faster Starport for a Viking over faster Tanks. Use EMP Round to fend off cloak.

Depending on when you scout, this should be relatively easy to hold off. Make sure to wall off as fast as you can and use snipe on the Marines. The Ghost-ing player should easily be able to deal more damage with more SCVs and the Ghost than the other.

If you see that the opponent is making Tanks with a Reactored Barracks and no intention of expanding, assume this opening. Confirm with an SCV patrolling outside the enemy main to see the army move out. The proper response is to simply continue your own Tank and Reactored Barracks production. The key here is that the Ghost-ing player cannot let the other player siege up in front of the natural. Pull 4-7 SCVs as you will have less Marines and probably a tank and engage the all-in en route to your base. The Ghost-ing player should win the engagement crushingly with the added DPS of Snipe.

This can be tricky to hold off if you are caught by surprise as Snipe will not be as helpful here. as soon as you scout the all-in, start building Marauders and Concussive Shells yourself.