Glon's Guide to Zerg vs. Protoss 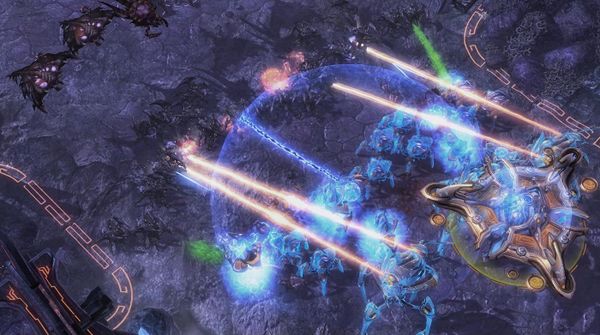 Playing against a Protoss opponent is a unique challenge that requires a different skill set than when playing against the other two races. ZvP heavily emphasizes the importance of macro, and while micro and positioning are definitely important, they aren't as essential in this match-up as they are in ZvZ and ZvT, since your Protoss opponent has Force Fields and Vortex at their disposition. If you follow the builds and tips in this article you will be better able to respond to many of the strategies your Protoss opponent can throw at you.

To start, send your first two Overlords across the map. Your first Overlord needs to check your opponents natural to confirm whether your opponent is going for a Gateway into Cybernetics Core build or a Forge Fast Expand. Your first Overlord should then move into the main base, moving to a place of safety immediately if your opponent is going for a quick Stalker or just hanging out near the main Nexus if your opponent does not. Your second Overlord needs to go to some place near the natural (the point is to have vision of the natural gasses, or otherwise move in your Overlord later to see them at a specific point in time), to check whether your Protoss will expand or instead opt for a one base all-in. In general, if a Nexus has not been planted by 4:30, it usually indicates the latter.

The next timing is at ~10:00, which is important to remember. At this timing most 2-base Protoss all-ins will hit. If your opponent is on two bases and you have 60 Drones, you should only be making units (this should be at around the 8:30-9:00 for a professional, however it may be later if your macro is not spot on. That's ok - learn what 60 Drones looks like spread out across 3 bases and learn to estimate while in game). As a general rule, do not stop making units until your opponent takes a third - yes, professionals do sometimes Drone, however as a GENERAL rule continue to produce units.

Finally, always have a Zergling behind your opponent's third base. Get in the habit of doing this; it will let you know if/when your opponent takes a third base, in which case you can stop making units, and proceed into a macro game.

So now you've scouted that your opponent is taking a third base. First thing's first, assuming that your opponent does not have a Warp Prism harassing you, take any units you may have built in the case of a 2 base all-in and move them into an aggressive position outside of your opponent's 3 bases. As you get better, you will figure out how to poke and harass your opponent without losing units to forcefield traps, etc.

In the meanwhile, at home, you should be taking a fourth base, adding a second Evolution Chamber (preferably researching missile and melee upgrades, leaving armor until Hive, when you take a third Evolution Chamber), and droning up. Generally, you want to OVER-drone your fourth base a tad, in order to be able to place down a Spine Crawler wall eventually while still mining adequately. Tech to Infestors, and build units to defend any pushes that may come while you're teching to Hive. Usually, most players start their Hives at around the 12:00-12:30 mark in order to have Brood Lords out at a reasonable time. Taking a Hive sooner than this point is discouraged as it can leave you vulnerable to certain 3 base all-ins while taking it too late can get you stuck in a low tech late game that simply does not work versus the monstrous Protoss death ball.

Creep spreading in ZvP can only help you - some Zerg players choose not to focus on it, but they are making a critical mistake. Not only does creep give you a huge amount of vision, but creep also can delay all-ins/pressure from the opponent, forcing them to wait for the creep to dissipate before moving out. Therefore, it is suggested that you follow these creep-spreading tips in ZvP:

Assuming that your Protoss opponent is not going air-toss (i.e. Carriers, Mothership, Void Rays, in which case have six Brood Lords to focus High Templar, with the rest of your army consisting of Queen/Infestor/Corruptor), your army should consist of:

At this point there is no need for you to take any unwanted fights. During any battles that you decide to fight your army needs to be presplit, with Infestors and Queens under or slightly behind the Brood Lord wall to avoid Feedbacks. When the Protoss army approaches, throw down a thin(ish) wall of Infested Terrans - remember you don't want to spend too much energy on this, only enough to take away some fire - and make sure that everything is attacking. In these fights, the Zerg player is forced to manually select units and micro them away or forward for specific spells. This is what the professionals do in late game engagement; you can try to copy as much of it as possible, however don't overwhelm yourself. When fighting these late game engagements, it is imperative to keep an eye on the position of your opponent's Mothership. A single, well-placed Vortex can capture your all your Infestors, Corruptors, and/or Brood Lords, instantly swinging the fight into the Protoss player's favor. The presplit minimizes the probability that your opponent will be able to land a good Archon Toilet on your Brood Lords, and always make sure to position your Infestors as far away from the Mothership as possible or keep it rooted far away via Fungal Growth. As long as your units are pre-split and you're spamming Fungal Growth and Infested Terrans along with some Transfuse, you should win the fight. If you're feeling particularly bold, you can try to land a few Neurals on your opponent's Colossus or Mothership.

For complete tips in ZvP, read through the Offense and Defense sections in: General ZvP Strategy