Glon's Guide to Zerg vs. Zerg 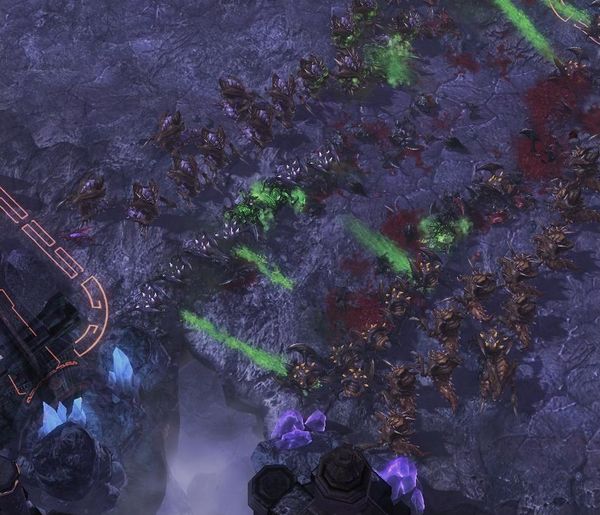 Zerg versus Zerg is a very fast paced and micro-intensive match-up. It is probably the most unforgiving of the mirror match-ups, as the smallest misclick or amount of inattention can cost you the game. Oftentimes, the things that cause players to lose games, even at the highest level, are small mistakes and losses early on that pile up and end up snow balling. As a result, it is imperative that Zerg players learn how certain scenarios can play out, so you can minimize losses and out-strategize your opponent.

Before we even start discussing build orders: your first three Overlords must go across the map. Generally, your first Overlord should head towards your opponent's natural, the second one to your opponent's third (or some place near it that gives you as much vision as possible), and the third one to the middle of the map where there is a good chance they can spot incoming early aggression. Future Overlords can be placed at your own discretion, though it may be a good choice to leave them near your base to keep them from being picked off.

There are three basic openers that can be done in the ZvZ matchup: fast Pool (on 6, 7, 8, 10, 11), standard Pool into expand, and Hatchery first. The standard build orders for each opener will be outlined below.

Opening with a 6 or 7 Spawning Pool is strongly discouraged. These builds can work but they have no follow up and are as all-in as you can get. Therefore, should you decide to go for this type of opener, it would be encouraged to open up with a 10 or 11 Pool.

At this point there is a choice. You can build an extractor, working toward Speed) and early aggression OR you can take the natural expansion.

Either way you will attack with your Zerglings. If your opponent opened 14 Pool, start focusing down your opponent's building Hatchery. Your goal is to force a cancel on the Hatchery or kill any Drones used in defense. Remember that you're looking to cause economic damage here to either help you when you do a follow-up all-in later (if you took Speed) or to get ahead as your take your own expansion.

Pull back to your natural after harassing. You should build a Spine Crawler since your opponent will have more Larva (so potentially more Zerglings). Block your ramp with Queens and when possible morph one or two Banelings for defense.

Follow-ups: Moving into the Mid Game[edit]

This is the most standard build, and if you are looking to improve, this is the build to learn and master. It can be used in any situation, on any map and can defend any all-in (if scouted in time) while also having the potential to keep up with any macro build from your opponent.

If your opponent takes a 14 Pool or 15 Hatchery, use your two early Zerglings to scout out your opponent's base. You can either take a Baneling Nest after your first 50 gas and research Metabolic Boost with the next 100 gas mined, though you can flip this order if you wish. The difference is that the former is safer, while the latter sets you up to be more aggressive. Enter a standard mid game!

If your opponent chooses to go for an aggressive Spawning Pool, there are several different deviations that you must memorize and react to depending on what you see. However, it is always standard to stop mining gas and/or cancel your Extractor if possible; you'll need all the minerals you can get to defend and then recover to a favorable position.

If your Opponent pulls Drones with his Zerglings
You must cancel your natural Hatchery. Generally, your goal here is simply to stall until you are able to get a sizable number of Zerglings/Queen/Spine Crawlers. Be sure to also cancel any Spine Crawlers being built before your opponent's Zerglings/Drones get to your base - any delay helps! When your opponent's Zerglings/Drones enter your base, mineral walk your Drones to your natural mineral patch, build a Queen, and build Zerglings. Try to sneak one of your Drones behind your mineral line before hand to build a Spine Crawler. As a general rule, when your Queen pops you can fight your opponent. You will have 8-10 Zerglings, and more Drones. Continue to rally Zerglings and micro as best as possible (pull back injured Zerglings/Drones, etc.). Keep in mind that it is ideal to engage when all of your minerals are spent - you will have as many units as possible at this point.

If your Opponent does not pull Drones with his Zerglings
The goal of your opponent here is to cancel your natural Hatchery. Once you see your opponent's Zerglings crossing the map with your first Overlord, immediately build an Overlord and pump out as many Zerglings as Larva permits. Grab a Queen after building your initial four Zerglings. Generally, you will want to pull four Drones with your initial four Zerglings (two Drones for each extra Zergling your opponent has over you). Continue to build Zerglings as long as your opponent does - your opponent should take a Hatchery. However, if he does not (you will scout this with your first Overlord), block your ramp with two Queens and start a Spine Crawler. Be careful to not lose Drones - if you don't lose any, you will be far ahead and in a winning position. See above for what to do if ahead/behind your opponent.

Generally, this play relies on a larger map or the player having excellent micro skills to hold off early aggression. Realize that going for a Hatchery first puts you in a vulnerable position to several all-in plays. However, the early economic boost is always welcome.

When your Spawning Pool finishes, grab two Queens. Again, you can build a Baneling Nest on 50 gas in order to play very safely, and then start Zergling Speed at your next 100 gas.

If your opponent goes for a 14 Spawning Pool or 15 Hatchery, play standard. You can pick the unit composition you would like to build towards.

Playing in the mid game in ZvZ is all about reacting to what your opponent does. Therefore, this section will be split up into several sections:

Almost all games end up in a Roach/Hydralisk/Infestor based fight. Remember to spread your units - the player with the concave nearly always wins the game! Now that Infested Terrans have been nerfed, try not to use your energy on them. Saving your energy for Fungals is nearly always the best option unless you are desperate - the extra energy saved means that you can take another fight soon after the initial one ended. Again, just remember to split your units into an arc!

Counter attacks in ZvZ make the game dynamic and exciting. Preparing six Roaches to hit an opponent's base not only kills drones, but will also pull your opponent's army out of position. It is common practice to sneak some Roaches or a couple of Infestors around the side of the map to gain positioning over your opponent; small mineral/gas investment, huge gain on map positioning.

Creep spreading in ZvZ is tricky. Spread too much and you might help your opponent more than yourself, not enough and your defense will be too slow. It's usually not a good idea to sacrifice a larva inject from your Queen for a Creep Tumor, unless you have an abundance of larva or little money. Usually you plant your first Creep Tumor either with your second Queen (if you have gone for an early gas), or around the time you are teching to Lair and taking your third. We categorize creep spread as follows:

For tips in ZvZ, see the page: General ZvZ Tips