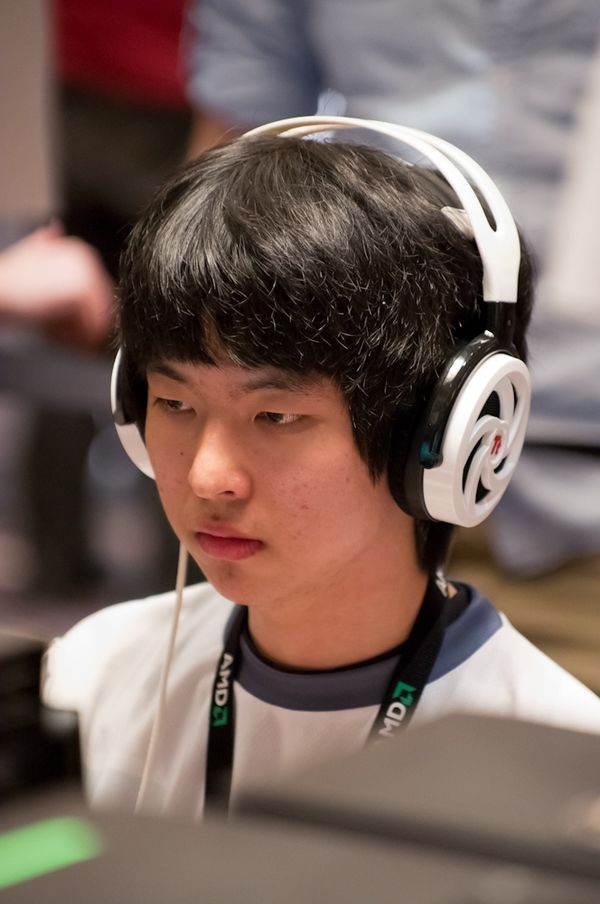 Golden was a member of fOu before transferring to SlayerS.

On January 16, 2012, he announced that he had left SlayerS with the intention to join a foreign team.[1] On January 21, 2012 it was announced he joined LighT eSports with stalife.[2]

Golden qualified for 2010 Sony Ericsson Starcraft II Open Season 3 by beating NangChun in the qualifiers. He managed to beat TheWinD in the Round of 64 but was knocked out by Squirtle in the Round of 32.

Golden requalified for Code A in the 2012 Global StarCraft II League Season 2 by beating Sirius in the Preliminaries.

On July 19, 2012, Golden announced that the coming MLG Summer Arena would be his last event with LighT eSports.[3]

He would be left teamless following Quantic disbanding, though would be picked up by StarTale some time later.[5]

In the GSL Code A Tiebreaker Matches, Golden was put into group C. He managed to beat players Monster, TaeJa and PhoeNix but lost to Moon, August and BBi, ending with a score of 3-3 which let him qualify for Code A in the GSL January.

He would be ousted 2-0 by eventual Code A runner up ByuN, knocking him completely out of the tournament.

Golden would play in the IPL 4 Open Bracket, he beat his first 2 opponent 2-0, and 2-1 respectively, he would go on to lose 0-2 vs Leenock dropping him into the losers bracket. His first opponent was TLO who he beat 2-1, he would go on to defeat Scarlett and then lose to Swedish Protoss Player SaSe ending his tournament run. Golden played in HomeStory Cup V, he managed to make the playoffs, his first opponent in the Round of 8 was sLivko, Golden won in a close series with a 3-2 score. His next opponent was YongHwa whom golden lost to 1-3. A third place match took place where he played against MC he ended up losing 0-3, his final placing that tournament was 4th.

Golden would make a return to IPL with IPL 5, in his first round he played against Genius who he lost to, he would then win against his first losers bracket opponent to lose to fellow zerg player BBoongBBoong.

Golden won the NASL S4 Open Tournament against SortOf with a score of 3-2, this allowed him to participate in the Round of 16 Main Tournament bracket, his first opponent was Arthur who was a former SlayerS Protoss player, Golden managed to barely win with a score of 3-2 advancing him into the offline portion of the tournament. His opponent was Polt. Golden managed to win 1 game but that was all, Polt would win 3-1 advancing him over Golden.

Golden participated in the Red Bull Training Grounds. He was in Group B, he won all 3 of his matches vs DeMusliM, puCK, and SeleCT. He went on to face Canadian player Kane who he defeated 3-1 which put him into the finals against his team-mate Sound, Golden managed to win 4-2 crowning him the champion.

Golden was invited to Red Bull Battle Grounds New York City as he was the champion of the Red Bull Training Grounds. Golden announced right before the event that this would be his last tournament and he would retire after it. Golden Played in Group A where he faced against his soon to be ex-teammate Bomber and Scarlett. Golden would lose both series 0-2 knocking him out of his last tournament.

On December 17, 2013, Golden announced he would stream under sponsorship from Ownaj and Clarity Gaming until his military service in December 9, 2014. He would not return to progaming or join Clarity Gaming's roster.[6][7] However on January 30, 2014, he announced that he had reversed his decision and would come out of retirement since his draft notice calls for him to enlist in December instead of March as he originally thought. He also announced intentions to enter WCS in Season 2, perhaps in America, and also to enter foreign tournaments.[8]

On New Year's Day 2014, he also announced that he was organizing a 4-person tournament to support HyuN after the collapse of Quantic Gaming, which left HyuN owed $23,000 in back pay. The event will feature jjakji, StarDust, MC and Symbol as well as Golden and HyuN as casters.[9]

After being knocked out of the Round of 4 for the second season in a row in the 2014 WCS Season 3 Europe Premier League, Golden announced his retirement to perform his military service.[10]

In September 2016, Golden was released from military service and began streaming.