Graviton Beam is an offensive spell cast by the Protoss Phoenix. The Phoenix targets a non-massive enemy ground unit, lifting it into the air and disabling it for a 10 second period.

In competitive play, the Graviton Beam is often used to lift key enemy units, weakening the opposing ground army and making it easier for friendly ground forces to deal with them. Typical usage involves a group of Phoenixes with one Phoenix using Graviton Beam on an enemy unit, lifting it into the air, so that the rest of the air group can destroy the disabled enemy unit with their air-to-air attack. Alternatively, Graviton Beam can be used as part of a Phoenix worker harass strategy, where Phoenixes lift and pick off enemy workers before flying away from danger. This directly damages the enemy's economy, through the destruction and disruption of worker units, but can also force indirect economic damage on an enemy as they may establish static defenses to deal with the thread of Phoenix harass.

Additionally, Graviton Beam can be used to lift friendly units in order to protect them from damage. For example, one could lift one's own Immortal should that unit be caught out of position by the enemy and be in danger of dying. The 10 second duration of Gravitron Beam also happens to coincide with the recharge timer for Plasma Shield. Take note, however, as the lifted unit experiences no change to its attack priority and opposing units will not switch targets if they are able to attack units on both air and ground.

While the Phoenix is not a standard unit in PvP, a small fleet can be used to Graviton beam and focus fire important and dangerous Protoss units, such as the Immortal. The removal of even a single Immortal from a battle can prove to be a turning point in a game, and it may not be expected by the Protoss opponent. To a lesser extent, Stalkers can also be lifted during battles, though oftentimes it may be more beneficial to utilize the Phoenixes against heavier units such as Immortals.

Use of Graviton Beam can help against a turtling Terran opponent when used to remove deployed enemy Siege Tanks one at a time. Of greater interest to the Protoss, though, is the removal of any Ghosts on the field, because well-placed Graviton Beams can prevent their devastating use of EMP on the Protoss army. Another good use of Graviton Beam is to lift and kill Terran MULEs. Protoss players must be careful though, because the Terran army is very capable in taking care of any enemy air forces.

Against a Zerg opponent, it is possible for a Protoss player to get a small group of Phoenixes into the Zerg base in order to use Graviton Beam to snipe the opponent's Queen, dealing a very big blow to the opponent's economy and macro abilities for a short period of time. Four Phoenixes are required to defeat a Queen with the help of only one Graviton Beam. This can also be done with a single Phoenix and Void Ray, using the Void Ray to deal the damage while the Queen is suspended in the air. Graviton Beam can also be used to snipe the Infestor so that the Zerg player will be unable to use its spells on the Protoss army. It is also able to end the channeled effects of Neural Parasite by lifting the Infestor.

There are interesting effects associated with a group of Phoenixes casting multiple graviton beams on enemy units and attempting to kill them. Too many graviton beams cast will have too many Phoenixes channelling the spell, and drop the Phoenixes overall damage output to where units don't die in a timely manner. Too few cast will result in overkill and some Phoenixes sitting idle. Therefore in the interest of dealing maximum damage the player must find a balance between keeping all Phoenixes constantly firing, not over-killing, and minimizing units in the air at once. In order to find this perfect balance for maximum damage output, use the following formula to find out how many units to raise at once: [Number of Phoenixes] / (1 + [number of hits Phoenixes take to kill target unit]), rounded up = [number of units to be in the air at a given time]

This still does not completely avoid overkill due to incidental focus firing. This can be minimized by manually focus firing.

On the other hand, in many circumstances it is favourable to suspend as many units as possible in the air to prevent them from either escaping or dealing damage. This is particularly true when other friendly anti-air units such as Stalkers or Void Rays are present.

Ultimately the player should consider both priorities of dealing damage and disabling units in tandem when choosing how many units to elevate. 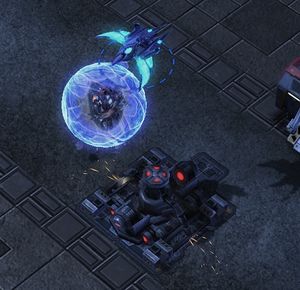