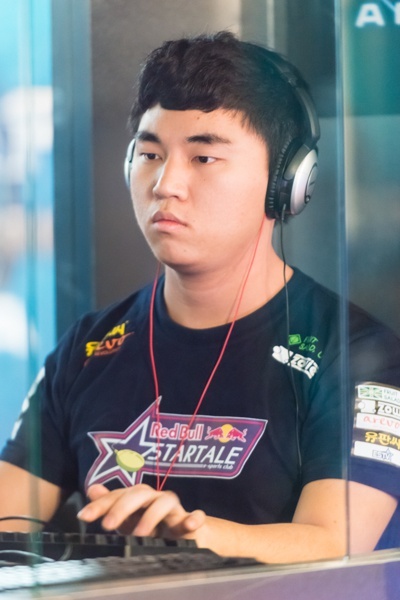 Originally called ON and playing for team NEX, Hack debuted on the scene during the final open season of the GSL. He was met with a quick departure as he would be eliminated in the first round 0-2, by BoxeR.

Since then, Hack has been unable to make a significant breakthrough in Korea. His most notable accomplishment is an all-kill of an inexperienced FXO in GSTL Season 1, a feat that was repeated by HoSeo. Hack has continued to compete in numerous online tournaments, perhaps being one of the most successful of the new South Korean wave of entrants into the weekly TL Opens with his collection of top two finishes.

Hack finally made it into Code A in GSL August, but lost in the first round to MarineKing, putting him back into Code B.

On October 7, 2011, it was noted that Hack changed his Twitter ID to StarTale_Hack, therefore indicating that he switched to StarTale from ZeNEX.[1]

Hack almost made it into Code A for 2012 GSL Season 1, but lost to Avenge in the finals.

In the 2012 Global StarCraft II League Season 4 he defeated CJ Entus Zerg rare as well as Finale from MVP both in 2-0 sweeps before falling to his team mate Squirtle 0-2. In the up and downs he found himself in a group with the likes of IPL4 champion aLive and GSL Champion MMA however in a surprise to many he defeated both of the Terrans as well as JYP of Evil Geniuses despite losses to the Zergs BBoongBBoong and HyuN he would be able to advance into code S where made his code S debut in 2012 Global StarCraft II League Season 5

In 2012 GSL Season 5 Code S Hack managed to finish 2nd in his Ro32 group by defeating Happy in his first match, falling to Symbol in his winners match, and defeating RorO in the final match of the night. His run ended in the Ro16 where he took 3rd in his group, falling to MarineKing in his first match, winning against YoDa in his second match, and losing against HyuN in a deciding final set.

On July 6, 2011, Hack participated in the ESV TV Korean Weekly Season 1 Weekly 4. After taking down Check, Kyrix, and ByuN, Hack went on to face Life. He was not able to advance any further after he lost to Life by a score of 0-3 and fell in to the 3rd/4th place match. Hack once again wasn't able to grab any more victories and had to settle for fourth place after losing to Classic by a score of 0-W.

On February 9, 2012, Hack participated in the ESV TV Korean Weekly Season 2 Weekly 3. After taking down MorroW, Comm, and Shine, Hack went on to face SaSe. He was not able to advance any further after he lost to SaSe by a score of 1-3 and had to settle for fourth place.

On February 12, 2012, Hack participated in the ESV TV Korean Weekly Season 2 Weekly 4. After taking down Shine, Comm, Dream, and Luvsic, Hack advanced in to the finals to face Tassadar. He wasn't able to grab first place after he lost to Tassadar by a score of 0-4 and had to settle for second place.

On July 22, 2012, Hack participated in the 2012 South Korea WCS Preliminaries. Hack received a BYE in round one and then took down AriA, hitmaN, LighT, and faced ZerO in the finals. After taking down ZerO by a score of 2:0, Hack advanced in to the World Championship Series: South Korea Nationals.