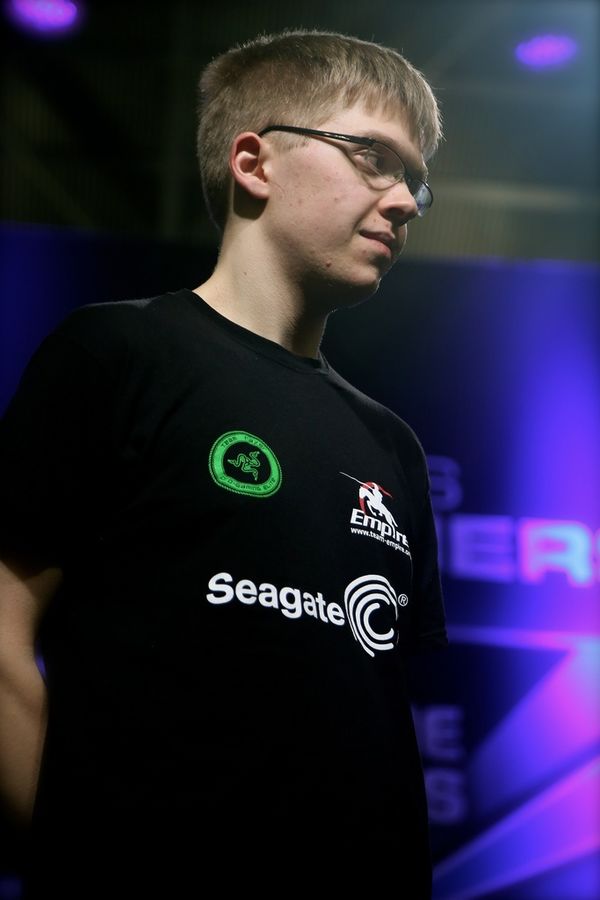 Happy was the best Warcraft III player to come out of Russia, playing the Undead race, and was a member of several prestigious teams during his Warcraft III career, including Meet Your Makers, Mousesports, and Evil Geniuses. His most notable achievements include reaching the third place of BlizzCon 2007 and World Cyber Games 2008, and reaching the fourth place of World Cyber Games 2009 and of Electronic Sports World Cup 2010.[1] He celebrated his biggest success in 2019 after winning the Warcraft Gold League, defeating Moon in the final.[2]

Happy left Evil Geniuses and really switched to StarCraft II at the beginning of 2011, playing as Terran. He then competed in weekly tournaments in order to get used to every kind of playstyles, and eventually won an online cup for the first time in March 2011 by overwhelming Fargo in final of Go4SC2 Cup #93. It was only the beginning of a winning streak in weekly online events, while Happy was improving and making a name for his strong micromanagement.

Happy participated in DreamHack Winter 2011, where he advanced from the first group stage after beating Beastyqt and Ciara, losing only to NaNiwa. The next day in the second group stage, Happy beat SjoW, lost to White-Ra, putting him at 1-1 in his group. It was all down to his match against ToD to decide which one of them would proceed to the playoffs. The first game[3] turned out to be a 74 in-game minutes nuke-fest on Tal'Darim Altar, also featuring a 5-Starport Battlecruiser tech-switch, which Happy ultimately lost. ToD took the second game[4] as well, proceeding to the playoffs the following day and knocking Happy out of the tournament.

From July 21 to July 22, 2012, Happy participated in the World Championship Series 2012 Russia and went far in the winners' bracket as he took out Strange, Turuk, Roll, and then TitaN to make it straight into the finals. He lost in the finals to TitaN by a score of 1-2, 0-2, and had to settle for 2nd place.

At the World Championship Series 2012 Europe Finals from September 15 to September 16, 2013, Happy lost in the first round of the Winner's Bracket to LucifroN, but still made a deep run in the Loser's Bracket. En route to the Round of 8, he defeated sLivko, TitaN, and Socke before falling to LoWeLy. He narrowly missed out on a seed to the 2012 Battle.net World Championship by losing in the 7th place match to Nerchio.

Happy qualified for WCS Europe 2013 Season 1 Premier League on the first day of the Premier League Qualifiers. He made an impressive run in Premier League, defeating HasuObs, Bly, VortiX and BabyKnight to reach the Round of 8. He was defeated there by DIMAGA and lost to TLO in the 5th place bracket, which left him without a seed to the WCS Season Final.

In WCS Europe 2013 Season 2 Premier League, he lost to TitaN but defeated ToD and SortOf to reach the Round of 16. Although he won a series against Tefel, he lost to MMA 0-4 in maps and fell to Challenger League. He defeated the French Terran Dayshi to requalify for Premier League.

In the third season of WCS Europe 2013, Happy defeated SaSe and the previous season's champion duckdeok to advance to the Round of 16 of Premier League.

Happy qualified for WCS Europe 2014 Season 1 Premier League by defeating ABomB. In his Ro32 group stage he was able to win against Bly, but lost 1-2 to BlinG and Korean StarDust.

He won against the German player Lambo with a score of 3-0 to make his comeback to WCS Europe 2014 Season 2 Premier League. Happy had one of the most severe groups in Ro32. He won against TLO 2-1, lost to current WCS Europe champion MC 1-2 and lost in decider to Golden 1-2.

On August, 01, Happy defeated Adonminus to start his WCS Europe 2014 Season 3 Premier League journey. In Ro32 he was able to make it through his group with MC, leaving Grubby and Serral behind . In Ro16 he defeated Harstem and Miniraser to make it to Ro8. WCS 2014 Season 3 was the worst season for European players, only Happy and Bunny were able to make it to Ro8, the rest being Koreans. Happy lost to Golden with a score of 1-3 finishing on 5-8th place and getting $5000 USD prize money.

On October 13, 2014, Happy left Team Empire with no particular plans for the immediate future.[5]

In order to participate in Premier League Happy had to play a best-of-5 series against Majestic wining 3-2. Happy made his 7th in a row appearance in WCS Premier League showing himself as a very stable player.