Hatchery (Legacy of the Void)

This article covers the current multiplayer version of this building. For other versions see Hatchery (Heart of the Swarm) and Hatchery (Wings of Liberty). 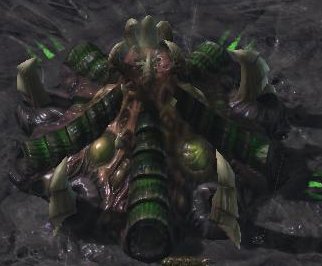 The Hatchery is the center of every Zerg base and expansion. It provides the Zerg player with Larvae as well as Creep covering an area of 8x6. Through Larvae and creep, Hatcheries give the ability to build all of the necessary Zerg units as well as the surface on which to create their buildings. Another important use that the Hatchery provides is the ability to create a Queen, which improves the Zerg's production capabilities as well as gives the Zerg player an early base defense. For

100, one can upgrade the Hatchery into a Lair. This upgrade takes

Upon being upgraded to Lair and subsequently into a Hive, a Hatchery will gain 500 health (for each upgrade).

The Hatchery offers two additional upgrades: Burrow allows most Zerg units the ability to burrow underground; burrowed units can only be attacked if a Detector unit has them in visual range or a Scanner Sweep is in effect in the area. Pneumatized Carapace increases Overlord and Overseer speed.

Zerg players will often build an additional Hatchery inside an established base to assist with unit production. This "macro Hatchery", along with an extra Queen, provides extra Larva to help build units faster. This building is especially useful when a player is making macro mistakes (particularly: missing Spawn Larva timings) or when the army composition is Larva-heavy, such as one that depends on Zerglings.

With Legacy of the Void, the Ventral Sacs upgrade has been moved to individual Overlords.