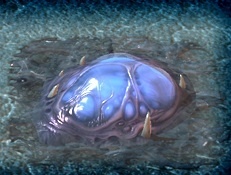 Hatchery first is the most economic opening for Zerg, but delays Tech and unit production. For this reason, going Hatchery first versus a Zerg opponent is sometimes considered a risky opening, given that your opponent will be able to put pressure on you with Speedlings and sometimes Banelings. However, following this build will allow you to open with Hatchery first while being safe against a large number of openings, given you are able to scout and react properly.

This build is a defensive one: you will plant an Hatchery before any other building, which will force your opponent to be aggressive to even out the situation if they opened with a Spawning Pool first. Once you have fended off the aggression, you will be able to enter the midgame with an economic advantage. Your opening will depend whether the other Zerg matches your Hatchery first or opens with a Spawning Pool.

Good scouting is absolutely necessary to the success of this build, and you will have to use different methods to make sure your opponent is not going to all-in you:

Counting Drones at the Natural[edit]

This opening is not map-dependent. However, a wide-open Natural is something that will make the execution of this build a bit more difficult. A notable example of this is Tal'darim Altar, where the lack of a ramp for your two Queens to wall off makes defending all-ins particularly troublesome.