Heart of the Swarm

From Liquipedia StarCraft 2 Wiki
[e][h]StarCraft II: Heart of the Swarm 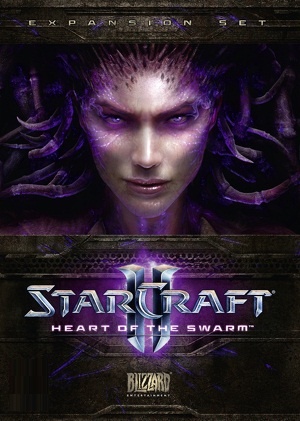 Heart of the Swarm is the expansion for StarCraft II announced as part of the Starcraft II trilogy of games along with Wings of Liberty and Legacy of the Void. It features an all new Zerg focused campaign, new multiplayer units, tweaks to existing units, new multiplayer maps and improvements to the Battle.net online service. The expansion was released on March 12, 2013.[1] The expansion went live at midnight in their respective regions.[2] It was released in China on July 17th, 2013, without global play available.[3]

The Campaign takes a more RPG approach in this expansion with Kerrigan being a controllable character throughout the vast majority of the missions and persistent upgrades for both the Queen of Blades and her brood.

Several highly requested Battle.net features were made available shortly before Heart of the Swarm and were added to Wings of Liberty as well as the expansion:

As part of the final hours leading up to the official release, Blizzard hosted official launch events in Seoul, Melbourne and Irvine in addition to the palace of Versailles just outside Paris - all with the help of famous players and casters. All videos are available here: Heart of the Swarm Worldwide Launch Events

GOMTV hosted the Seoul event at UNIQLO-AX in Gwangjin-gu, which included casting in Korean (including by Min) and English (by Wolf and Khaldor). It featured interviews with Korean stars such as BoxeR and DongRaeGu, plus show matches featuring Bisu, Flash, Jaedong, Creator, Life and Mvp.

ESL hosted the European event at the Palais des Congrès de Versailles, in the famous and traditional home of French royalty. The talent on hand included Artosis and Tasteless as casters, ReDeYe as host, Apollo as game analyst and multiplayer coach for incoming players, and four of Europe's top players - Stephano, Grubby, White-Ra and LucifroN - in a show match single-elimination tournament.