Hellion (Legacy of the Void) 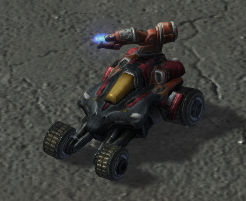 Unit Information
Type:
Ground Unit
Description:
Fast scout. Has a flame attack that damages all enemy units in its line of fire.
Built from:
Factory
Cost:

A fast expansion-raiding unit and anti-Melee unit when transformed into Hellbats. With a line of effect attack, the same range as a Marine's attack, Hellions excel at fighting in Choke Points on maps. With a very slow cooldown on attack and fast movement speed, this unit requires a lot of attention and micro-management to be effective due to its nonexistent armor and low health.

Despite being able to activate its weapon within a range of 5, the Hellion will deal AoE damage up to a range of 5.15. The flamethrower's stream is about 0.15 wide. To unlock the Hellbat mode, an Armory is required.

With good micro, Hellions can take out large numbers of Zerglings, though they do become vulnerable on creep as Zerglings with the Metabolic Boost upgrade on creep easily surround them.

Hellions are sometimes paired with Cyclones to create a fast hit and run micro-intensive mechanical style that excels at pressuring opponents and sniping units/bases. It is exceptionally proficient at poking.

The Smart Servos upgrade reduces the time required to transform into a Hellbat from 2.86-3.04 seconds to 1.43 seconds.

In direct army engagements, Hellions can transform into Hellbats to change to walking pace for extra health and splash radius, which is better suited for engaging melee troops like Zerglings and Zealots.

In Hellion mode, this unit favors hit & away tactics and drive-bombing mineral lines; sometimes even running right past the enemy army.

Hellions are particularly useful against Protoss spellcasters, the Sentry and High Templar, and can attack Zealots. However, it is far stronger for direct engagements as a Hellbat to take the brunt of the first attack wave for more stopping power to allow either Bio or Mech units to provide real firepower.

Terrans generally wall off as a popular choice for opening safely against Hellion and Bunker rushes, so having Hellions after the opponent has expanded is better so that there are more places to attack and drop at the same time.

Hellions with Infernal Pre-igniter can be effective against Hellbats in Mech vs Mech battles since the substantial range and speed advantage of the Hellion can allow it decimate Hellbat groups with decent kiting. They must still be controlled very carefully, however, since Hellions have much less health than Hellbats, and thus are much more vulnerable to Siege Tank fire.

Although Hellions can be effective against Marines, Marines generally have Siege Tank support, and therefore they usually cannot be used in large numbers against a bio-tank army.

Hellions are essential in TvZ to provide map control and scouting. Generally 4-6 are produced to create a threat that the Zerg must react to with a mass Queen opening, Roaches, Spine Crawlers, or a large number of Zerglings. Just before substantial defenses are established, Hellions are often sacrificed in the Zerg's mineral lines since they can no longer provide map control.

Hellions are not very effective against Roaches, so Roach attacks are frequently used to punish players who go for a quick third Command Center after producing Hellions. Such attacks can be accounted for with Banshee follow-ups or, if it is scouted, with multiple Bunkers and Marauder production. The Hellions themselves are not useful for defense, but can be used to delay the attack or counter-attack.

While unconventional, Hellions with Infernal Pre-Igniter can be used to decimate large groups of Hydralisks if they are able to get into range and/or surround an out of position group. They can then be transformed back into Hellbat form to heal up with Medivacs.