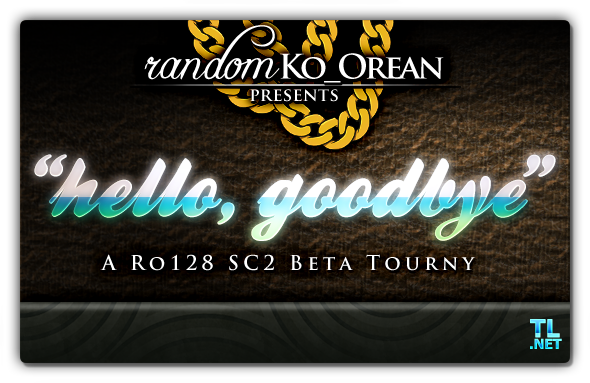 The Hello, Goodbye Tournament was the first StarCraft II beta tournament available for players with a beta-key for the US BNet-server. The tournament organizer randomKo_Orean is a long time forum member on TeamLiquid. On the 4th of March 2010, he started a topic on the Teamliquid forums where he announced his plans to run a StarCraft II beta-tournament before leaving the Starcraft community.[1] Therefore, participation is restricted to TL members:

From now on, people already signed up are fine, but you must have minimum requirement of 20 posts [on TL.net] and joined [TL.net] before Feb. 1st, 2010. No exceptions anymore.

Originally the tournament only offered a $50 prize pool, but thanks to several TeamLiquid members donating to the tournament, the final prize pool went up to $1105.[1] Along with the prizes, so grew the interest in the tournament. Originally set to have one caster, it ended up with three casters: Day(9), Diggity and Psyonic_Reaver were all set to cast in the playoffs.

From the original thread:

[randomKo_Orean] started off [his] Starcraft career at Team Areola (AKA AixaZnKid, got a position of replay rater for awhile), then worked [his] way to TLnet(...) In order for [himself] to give back to the community, [he has created] coaching thread and "[he'll] do your stupid idea" threads, among other things... but [his mother told him to quit gaming before she passed away] and [he has] full intentions to fulfill her wishes.[2]
However, [he wanted] to do one last thing for the [Team Liquid] community: a tournament.

Offering $1,105 spread among all players as follows:

Each casters received $40 per person, making the total money involved $1225.

From Age of Empires 3[edit]

The 128 man tournament was split into 8 legs. After the 8 bracket winners emerged, they were randomly placed into the Final 8 bracket.