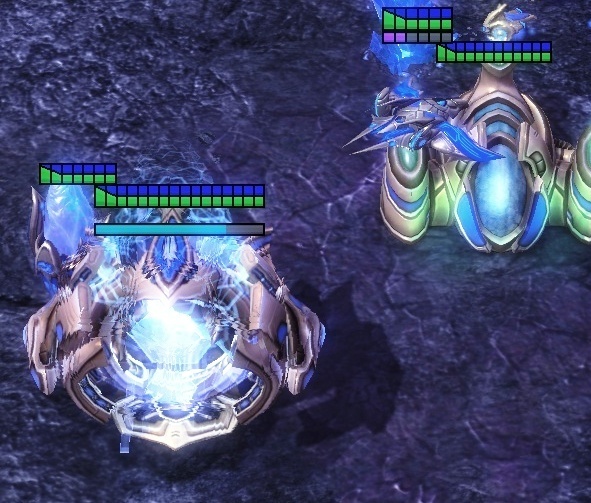 This build aims to play defensively off two Gateways, a Stargate and a Robotics Facility. This Tech-intensive opening allows you to be safe against a wide range of offensive strategies whilst also allowing you to always know that your opponent is up to due to the scouting capabilities provided by the Phoenix. For these reasons, this build allows for a lot of different transitions moving into the mid-game phase; however, it does not have the potential to become an all-in (cf. 3 Gate Stargate openings).

Defending In The Early Game[edit] 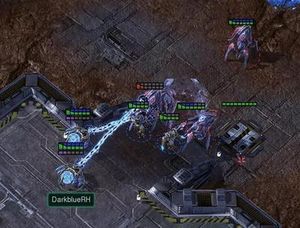 The optimal defense versus a 3 Stalker Rush

The Zealot/Sentry/Zealot opening is a very effective defensive unit combination that will put you in a good position to trap and kill units at the bottom of your ramp.

The key to defending this kind of early aggression is to position your two Zealots on your ramp so that:

From this position, you should be able to place a Force Field at the bottom of your ramp and use this trap to kill any unit trying to get up your ramp (e.g. 3 Stalker Rush).

As mentionned before, this build is safe against a large number of different openings, but some adaptations may be required depending on what you scout or expect from your opponent. This part covers all the openings you are likely to face, and how you should react upon scouting them.

Against a 4 Gate or 3 Gate All-In/Pressure[edit]

The best way to confirm this kind of opening (except for the obvious tells such as only one gas taken with saved Chronoboosts on the Nexus) is to time a scouting Probe to sneak into your opponent's base at 5:10. If you see no units (except for maybe a Stalker in the case of a 3 Gate Pressure), then your opponent is 4 Gating you, and their units are out on the map to plant a proxy Pylon near your base.

If you confirm a 4 Gate, cancel the Stargate, match your opponent's Gateway count and defend as you would do for a regular 4 Gate. You will have an economic advantage if you manage to defend.

When the 4 Gate hits you should have:

Finish the first Phoenix and use it to scout your opponent's base in order to determine whether it is a 3 Gate or a 4 Gate. Do not build the second one, you will need the gas for a third Sentry. Do build the Robotics Facility and add an additional Gateway (for a total of three). You will need to Force Field your ramp every 15 seconds in order to stop your opponent from gaining high-ground vision; this is really important as it will be very hard to defend once they get units into your main base.

This is a possibility with a Zealot/Sentry/Zealot opening, since your opponent knows that you cannot move out onto the map to challenge their expansion. In this case, you should either expand yourself or prepare for a one-base bust.

You will be able to identify this build with your scouting Phoenixes.

This is the most favourable opening to face when doing this build. The threat of a Warp Prism opening is eliminated by the Phoenixes and an Immortal bust will be weakened by your ability to lift those units.

Your reaction depends on who got the earlier Stargate:

The real threat of a Dark Templar opening is not the lack of detection (thanks to the well-timed Robotics Facility) but the ability to bust your ramp with Archons and Zealots.

Good maps to perform this build on are going to be maps which:

The #'s next to the maps correspond to the above mentioned features which have deemed this map good for this build. For example, "1" means that this map allows safe movement for your Phoenixes.

The #'s next to the maps correspond to the opposite effect of the above mentioned pro features. For example, "1" means that this map does NOT allow safe movement for your Phoenixes.