High Templar (Legacy of the Void)

This article covers the current multiplayer version of this unit. For another version see High Templar (Wings of Liberty and Heart of the Swarm). 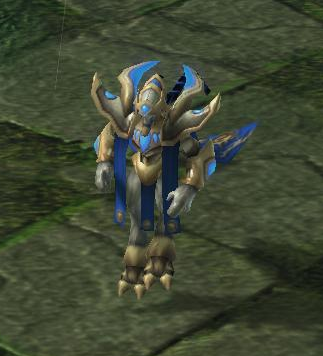 Used to snipe enemy spell casters like Ghosts and Infestors. It can also be used to damage Banshees (with detection), causing the Banshee to decloak even if the attack fails to kill. Dealing pure damage, ignores all types of armor. The following units are susceptible to Feedback:

Essentially, Protoss players in the mid-game transition have two broad strategic options: either Colossus or High Templar. Because both of these units are expensive and serve similar purposes with their area-of-effect attacks (Psionic Storm for HT and Thermal Lances for the Colossus), most players elect for one of these tech paths for the mid-game. (In late game, it is not uncommon to see both HT and Colossus deployed on the battlefield at the same time, however.)

Although it has an almost harmless attack and is relatively weak in terms of hit points and shields, the very powerful Psionic Storm can be vital for the success of Protoss. The unit is warped in with 50 energy, enough for one Feedback spell but not enough for a Psionic Storm (75 energy). It takes 45 seconds to get the additional 25 energy required for a storm. Common strategy is to warp in High Templars at locations to defend drops with feedback and then move them to the army when they have the desired amount of energy. The most common use for the High Templar is casting Psionic Storm on large numbers of small units such as Marines, Zerglings, or workers.

The main use of the High Templar currently is solely to create Archons as Immortal Archon Chargelot is the primary army composition in the PvP matchup. Another use of HT is to support Stalkers when fighting Void Rays. Due to their nature, Void Rays tend to clump up, making the Psionic Storm very strong, even though it deals a relatively small amount of damage to the Void Ray. It takes four storms to completely destroy a Void Ray, but the proper use of High Templar is to support the Stalkers, so you should never fight with templars alone. With the extra damage from the Psionic Storm, the Stalkers can take down the air ships, something they normally can't per supply and cost. Although their main use is to create Archons, High Templars can also be used to Feedback Phoenixes and Oracles, thus being a good defensive unit as well as an offensive one.

Because of the tendency for armies to clump together when moved en masse, large Marine/Marauder groups can be devastated with properly placed Psionic Storms. A Ghost's EMP can nullify a High Templar, leaving it vulnerable to be picked off by the opposing forces, though this can be counteracted by using the Feedback ability on the Ghost before EMP is cast. Feedback can also be useful on Medivacs to prevent them from healing Terran infantry units - this being especially effective when defending against impending drops when the Medivacs' energy level is the highest, possibly high enough to be lethal.

In the current way the game is played, the effectiveness of High Templar in Protoss vs Terran is highly dependent on the Protoss player’s control. Even after the removal of the Khaydarin Amulet upgrade, Psionic Storm remains an invaluable weapon against Terran bio, and a necessary tech switch against Viking heavy compositions. Now that Protoss players can not warp in Storms at will, they are forced to keep High Templar in their standing army as well as protect and control them carefully. A number of techniques for using and controlling High Templar efficiently emerged.

The first instinct of Protoss players was to have one High Templar step forward at a time to storm or feedback in hopes that the Terran player would waste an EMP on a single Templar or be hit by the Storm if he didn’t react quickly enough. Terran players proved too attentive to fall victim to the storm and used the Ghost’s Snipe ability or lone Marauders to pick off the Templar.

NaNiwa took a different approach and separated his Templar from his main army until his Stalkers, Zealots, and Colossus had absorbed all the EMPs. He would bring his Templar to the front to Storm while his main army retreated after the Ghosts had exhausted all their energy. However, the best this method could hope for was an even trade. If the Ghosts had even a few EMPs left when the templars moved up, the Templar could be wiped out easily.

The dominant methods of Templar control are the most difficult to pull off but also the most rewarding. Top players keep their Templar spread out at all times when not in battle, and try to keep them from clumping up as they engage. Many players store Templar in a Warp Prism and drop them in a line as the battle begins. The Templar are already spread out upon emerging from a moving warp prism and they are easier to position this way. However, the warp prism must be protected from Vikings at all costs.