Hydralisk (Legacy of the Void) 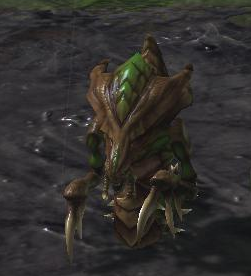 The Hydralisk is a ranged Lair-tech unit that can be morphed after building a Hydralisk Den. The Hydralisk's fast attack and high damage, along with not relying on bonuses to specific unit types, makes it consistently effective at dealing damage to both ground and air targets. Can morph into the Lurker after morphing the Hydralisk Den into a Lurker Den.

Due to the large difference in speed off-creep and on-creep, the Muscular Augments upgrade and/or spreading creep should be a key focus when executing any Hydra-based strategy.

Hydralisks (and Lurkers) are made for their attack range to counter units with a similar attack range like Stalkers and Marauders. Hydralisks are fragile, so they are often paired with high health Roaches to tank and Burrow/Tunneling Claws combo to retreat the low health Roaches. This simple and forgiving unit composition is great for lower level players that wish to practice their micro with a friend against Terran Barracks or Protoss Gateway units before moving onto a more complex unit composition. They are the only Zerg ground units that can attack air other than Queens.

Note that while the Hydralisk also has a melee attack animation when attacking ground units at melee range, this attack is still affected by the normal Ranged Attack upgrades. However, this close range attack is not affected by Guardian Shield or the now removed point Defense Drone.

That being said, while Hydralisks' main weakness is their vulnerability to AoE, the Protoss are severely lacking in that regard. Hence, when in army versus army combat, be on alert for enemy Disruptors or High Templars, and, if you note their presence, stay on the widest ground possible, as their AoE can only work if they can get you trapped in a narrow path (and remember - narrow for Zerg is not the same as narrow for Protoss or Terran). Colossi is another threat you have to be cautious about. While seemingly undangerous units when facing a horde of Hydralisks, the combination of Colossi and Sentries does pose a lot of danger. Sentries will wall your Hydras off, while Colossi with a range upgrade will burn your army down. The relatively obvious solution to the aforementioned is using either a few Vipers and their Abduct or a few Infestors with Neural Parasite upgrade. Once the target is pulled in, it must be focused down, wherever it's abducted or mind-controlled.

Obvious uses for Hydralisks in ZvP include using them as a backbone AA unit (as their burst makes short work of Carriers' Interceptors), or playing Hydralisk rush, with topping the rush with Lurkers, Overseers and Vipers. Do note, however, that "Golden Armada" of Carriers is barely stoppable by Hydralisks alone, so you either have to end the ZvP game fast or not consider the latter strategy at all.

Due to the Roach-focused nature of ZvZ, Hydralisks represent a significant power spike that, when scouted, often requires a response of either extreme aggression or building one's own tech.

Hydras are frequently added to a Roach army to form a Roach/Hydra style when there has been early aggression and neither player has maxed-out or gotten close to maximum supply with Roach/Ravager. Adding even a handful of Hydras to an army that is already nearly maxed makes a noticeable difference in DPS once each army has spread out, as Hydras even without Grooved Spines for range can safely fire from behind the Roach line. Hydras also give the player building them access to anti-air, allowing them to clear out Overlords and Overseers which will likely be all throughout the map. Some players may add a few Hydras earlier for this purpose to either supply block their opponent or to remove map vision.

Because Hydralisks make a smaller benefit when added to a large Roach/Ravager ball without their upgrades and are more fragile, players may start a Lurker Den and Hydra upgrades as soon as the Hydra Den finishes and only make a small group of Hydras a little over halfway through the Lurker Den's build time. This gives the player immediate access to Lurkers once they hatch. This is a common choice for a player who is behind and looking to defend without adequate defense. While the Hydra upgrades research, such a player may be more aggressive and try to get the jump on their opponent with the added splash damage of the Lurkers. Ravagers' Corrosive Bile out-ranges an unupgraded Lurker, so special care must be taken maneuvering them. Ideally, after taking cost effective fights, such a player will re-max with a decent number of Hydras alongside their Roaches and Ravagers, their Hydra upgrades nearly complete.

In the late game, the ultimate unit composition is Hydra/Viper/Lurker, but because these units are so expensive in terms of vespene gas and are fairly fragile, Roaches will often see continued use alongside them. Ravagers' Corrosive Bile out-ranges an unupgraded Lurker and may be used safely before they have the range upgrade, Seismic Spines, especially before a player has Vipers for Blinding Cloud/Abduct to properly engage them. Ravagers will have a smaller place in the late game as they are so expensive in gas and are out DPS'd by the equal range, less expensive Hydra(upgraded), but their ability is a still a strong zoning tool. A high Hydra count allows for massive DPS and gives the player a chance to jockey for positioning against their opponent's Vipers. Against Lurkers, Hydras and Roaches have similar vitality due to the Lurker's 50% bonus damage to armored units.

If facing a player using the Mutalisk/Zergling/Baneling style, Hydralisks are an important step in a successful defense, but should not be used as a direct answer to the Mutas. Although more cost effective in even numbers at a small count, eventually the Mutas' mobility will allow them to make cost effective hit-and-runs, as well as be able to stack in such great numbers that they have far more units attacking at once and quickly retreat for a fast, full heal. Infestors for Fungal Growth and a high Queen count (10+) are much more effective at zoning out or potentially catching many of the Mutas. Vipers also are important for landing dangerous Parasitic Bombs, and should be supported by high damage anti-air like Hydras to keep the Viper alive afterwards; Queens' damage is more long-form and might not be enough to stop the Mutas diving on the Viper if it is in an undefended position. Scouting an opponent's Hydra Den may indicate an eventual Lurker transition as opposed to trying to end the game with Ultralisks.