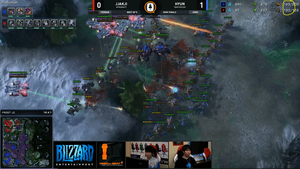 I'm sure people have noticed a surprising amount of roach/hydra popping up in ZvT recently. Between PiG's recent blog post and many games by HyuN at SeatStory Cup, the year-old late WoL/early HotS strategy seems to be on the rise again. Is it the Hydra buff? Have people just found new timings? I'm just going to delve into HyuN's build from Seatstory Cup, how he managed to gain tempo going into the mid game, and how it allowed him to just crush every Terran he faced.

This build should protect you against Reaper and sets an economic focus. It's main focus is to create 150 Supply in 10:30 and to attack with 1/1 Roaches at that time.

HyuN's initial Queens and 6 Zerglings deal with Reapers easily while losing almost no drones; note that it's very easy for HyuN to have 6 Zerglings out with his pool on 14. After defending, the first two Queens move to the front and begin to start spreading creep while the second set of queens begin injecting.

HyuN's scout timings basically revolve around two things: what is going on at the ramp and if there is an early 3rd Command Center. In most games, HyuN simply leaves his initial Overlord hanging out over the barracks until a marine pops out to check how many Reapers his opponent is making. This also usually allows him to see the factory when it goes down. If his initial overlord isn't killed off, he'll use it scout the main base around 6:00 to check for the third Command Center, otherwise he'll just poke with another Overlord. HyuN also checks the ramp again at ~7:00 to check for Banshees.

After taking a third and going up ~60 drones, HyuN starts producing nonstop roaches. At 10:30, HyuN has an attack timing with 150 Supply and +1/+1 upgrades for his Roaches finished. While this can outright kill a greedy Terran player, it is designed to allow HyuN to spread Creep, add a 4th base and prevent the Terran from taking his 3rd early. HyuN also puts a lot of effort into blocking the potential thirds of the Terran with Creep. Versus dedicated Hellion/Banshee pressure, HyuN would probably leave a few Roaches back at home to prevent Hellion runbys from doing massive damage and would probably tech to Hydras a little faster.

During his first push, HyuN can get a good read on his opponent's composition and defensive ability and make decisions based on that information. If HyuN can annihilate the first line of defense and put himself ahead with the first push, he starts only +1 attack and pumps nonstop roaches, delaying his Hydras. If his first push is unable to break the Terran, he does his best to stop the third from going down while droning up his 4th, teching to Hydras, and starting +2/+2. This sets him up for yet another powerful attack at 14:00 with a maxed out Roach/Hydra force, which is usually game ending.

In his game against mech with HeRoMaRinE, HyuN drops down a hydra den and infestation pit simultaneously and techs straight to Vipers. Because his first push allows him to spread so much Creep, he can endlessly kite a pre-hive Hellbat/Tank push and buy just enough time for Vipers to get out. What's nice is that HyuN changes very little in his build order whether he's facing bio or mech; either way, his strategy seems to be fairly effective.

All in all, it's a pretty sick build! I'd like to see more of it. I'm not sure what the ultimate transition would be, but I assume that Roach/Hydra -> Infestor/Viper and adding Swarm Hosts and lots of static defense eventually would work. It's hard to say if this composition is on the rise again with the hydra buff, or if it's just a new strategy that will get figured out.

Roach/Hydra is a fast unit composition ... work in progress.