IEM Season IX - Shenzhen is the first event of IEM Season IX, organized by ESL. It is casted by Apollo, mOOnGLaDe and qxc with Lilsusie as host and interviewer. They were joined by Kaelaris and ReDeYe for the playoffs. Game observing is done by FunKa.

There are 8 spots for players from all over the world divided to regions as follows[1]: 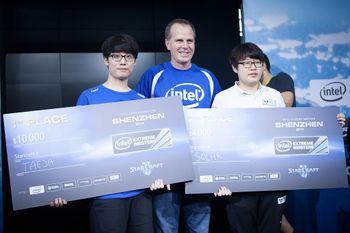 * Players must advance one round in order to claim WCS points for that placement. Being seeded through qualifiers counts as advancing one round.[2]

San playing in front of the crowd