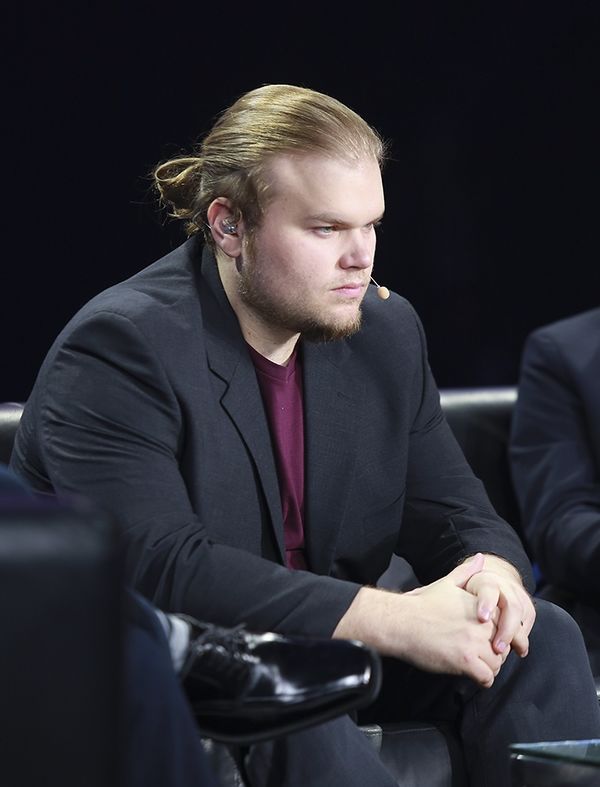 Geoffrey John Vincent "iNcontroL" Robinson was an American Protoss player who worked as a professional caster for WCS events as well as the SHOUTcraft Kings series. Additionally, he was an RTS variety streamer and host of The Pylon Show on Twitch every Wednesday.
On July 20, 2019, he passed away from pulmonary embolism.[1] [2]

Geoff "iNcontroL" Robinson was a professional StarCraft II and former Brood War player from the United States. He was raised in Seattle, Washington and was the eldest of three siblings. He was educated privately in an all boys high school. iNcontroL attended college and graduated with an English degree.[3] He was a contestant in WCG Ultimate Gamer (Season 1) where he finished in 9th place. In Brood War he played as Zerg, but during the StarCraft II beta, he changed his race to Protoss.

In addition to being a player, iNcontroL was one of the biggest community figures in the North American StarCraft scene. He was one of the founding players for the professional StarCraft coaching website, Gosu Coaching, with his fellow Evil Geniuses teammates,[4] was one of the regular hosts on State of the Game, and has worked as an occasional caster at various show matches and tournaments. In particular, iNcontroL was a regular caster on North American Star League Season 1, and worked as a caster and host at 2012 DreamHack Open: Stockholm. He has often been asked whether or not he would switch to being a full-time caster because of his lacklustre playing career as of yet. Geoff plainly stated that his passion was to play the game, and that if he was in StarCraft II for monetary reasons he would have switched a long time ago.[5] In terms of his immediate future, i.e. while still a progamer, he expressed that the reasoning behind him not casting in more events is because of conflicting sponsors for the event. He has been approached by both GSL and MLG and has had to turn down offers for that reason.[6]

In early 2018, Geoff created The Pylon Show podcast with co-host Artosis and CobraVe7nom7 who produces the show weekly.

Despite not having any major successes in the beta, iNcontroL did compete in quite a few events. He won Smuft's Team Battle Tournament as part of the clan [Media] and competed in some show matches as part of Team USA. He also competed in one round of the ITL and as part of EG in the EG vs Team Liquid clan war. He was invited to the HDH Invitational but was knocked out in the first round by Nazgul.

iNcontroL was a consistent presence at all of the 2010 and 2011 Major League Gaming (MLG) events. He also was an icon for the North American Star League (NASL) in its beginning stages. He played in the tournament, Trial of the Xel Naga hosted by Day9 and Red Bull where he placed second, falling 2-1 to NonY.[7]

Geoff's results from MLG 2010 gave him a top 16 seed in the subsequent year. His best tournament performance to date occurred in his first MLG tournament of 2011, MLG Dallas 2011. There, he took first in his pool, defeating SLush, TLO, and Mihai, but losing to Painuser. From there, he lost to SeleCT 0-2 in the winner's bracket, beat TLO 4-2 in the following round, and finally exited the tournament with a 0-2 loss to KiWiKaKi. This gave him a 4th place finish in the tournament. This ensured iNcontroLs participation in pool play for, at minimum, the next four MLG tournaments.

However, in part to the South Korean invite system now had in place, iNcontroL fared significantly worse in his next MLG tournament, MLG Columbus 2011, where he placed 22nd. He was seeded into pool play with players LosirA HayprO Machine TLO and eventually MajOr who came out the open bracket. He won against HayprO and controversially TLO; iNcontroL managed to hide a Pylon in TLOs base and with early aggression through the in-base Pylon. Ending second last in the group, he was placed into the championship bracket at the low end. He needed to defeat SeleCT to progress further but was dismantled 0-2, and thus, ending his tournament life.[8]

At MLG Anaheim 2011, iNcontroL was seeded into Pool B with BoxeR, IdrA, SjoW, Sheth, and CrunCher from the open bracket, ending with a score of 0-5. In his championship bracket run he would defeat Choya before falling to TLO 1-2, once again finishing in 22nd place.[9]

His next MLG tournament, MLG Raleigh 2011, would play out similarly. He was placed into Pool A against CoCa, NaNiwa, HuK, Rain and TriMaster from the open bracket, ending again with a score of 0-5. In the championship bracket, he managed to defeat Drewbie 2-0, but then fell to his teammate Machine 1-2, giving him another 22nd place finish.[10]

In March 2011, iNcontroL was seeded into Division B of the first season of the NASL. He played through the regular season and finished with a 4-5 record, securing his placement in NASL Season 2 but failing to make the playoffs. In NASL Season 2, iNcontroL finished last in his group with a 0-7 record and was eliminated from the league.

In addition to playing in the NASL, iNcontroL also cast the first season of the tournament with Andre "Gretorp" Hengchua. However, on June 24, 2011, iNcontroL announced that he would no longer be a regular caster for the NASL in the following season, stating his intention to focus on being a pro player rather than a caster. He did however state that he would be making guest appearances to cast alongside Gretorp in future seasons,[11] and he made good on this promise by returning to cast the grand finals of the second season in Ontario, California, alongside Day9, Tastosis and Gretorp.

iNcontroL flew to Korea in an attempt to qualify for GSL 3, but he lost in the final round of the qualifiers 1-2 in a PvZ.