Immortal (Legacy of the Void)

This article covers the current multiplayer version of this unit. For another version see Immortal (Wings of Liberty and Heart of the Swarm). 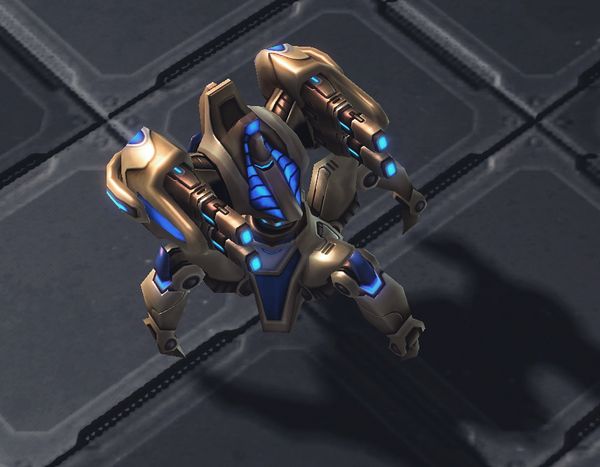 The Immortal is a durable ranged, mechanized strider for the Protoss army, produced at the Robotics Facility. Their Barrier ability makes them specialists at taking damage. Additionally, they have a powerful anti-armour attack making them capable against high-power units such as Siege Tanks and Lurkers.

The Immortal has succeeded the Colossi as the premier Anchor unit of the Robotics Facility since the release of Legacy of the Void, due to a variety of reasons. For the Immortal's part, the reworked Barrier ability made them durable against a far wider variety of attacks.

Immortals relate well to other Protoss units. Warp Prisms can now help move Immortals safely in and out of range to devastating effect, as used by HerO in tournaments - against Life in the IPL Tournament of Champions and against Jaedong at IEM Season VIII - Cologne, one of his Immortals recorded over 40 kills. Compared to the Stalker, Immortals now have the same DPS per cost against non-armored units (

4 for two Stalkers, with both providing about 19 DPS). The choice between the two is determined by a trade-off between Immortal's larger anti-armor bonus and the Stalker's anti-air and mobility capabilities (Blink and remote warp-in).

In small numbers, Immortals are particularly effective support against Stalkers, Roaches and Marauders as armored units during the early game. Even so, larger numbers of Immortals are highly useful against higher-tech armored units into the late game, especially key targets like burrowed Lurkers or Siege Tanks.

Immortals deal a large amount of damage to Stalkers and Colossi, but are quite ineffective against enemy Zealots. Zealot/Immortal vs Zealot/Colossi battles generally revolve around the Immortal user trying to snipe the opponent's Colossi before they are able to do too much damage. However, if Extended Thermal Lances is researched, the player with 9-range Colossi retains a large range advantage over the 6-range Immortals and often can position his Colossi to avoid Immortal fire while still attacking.

Against Stalkers, an un-upgraded Immortal will take 4 shots to kill a Stalker, however with +1 Weapons, an Immortal needs only 3.

Immortals are incredibly effective against small numbers of sieged Tanks due to their slow rate of fire, and do quite well against other armored units such as Marauders. Like when fighting Stalkers, an un-upgraded Immortal will take 4 shots to kill a Siege Tank; with +1 Weapons, an Immortal needs only 3.

Immortals are also effective against Thors, having similar effective HP but much more attack per supply.

Two Immortals in a Warp Prism may be dropped into a Terran base to destroy SCVs.

The use of early Immortals depends on the Zerg's strategy. They are less effective against Hydralisks and Zerglings and are unable to attack Mutalisks, and thus have little use against Zerg armies that largely consist of these units. Conversely, Immortals are strongly cost-effective against Roaches due to their 50 base damage against armored units and +2 range advantage over Roaches. Do note that just because Immortals counter Roaches does not mean that it's black and white, as their economic costs and production system are very different. GAMETIME a 6k MMR Zerg player has been known to take wins against Protoss players with mass Roach timings, meaning when they hit early enough, Immortals alone aren't enough. Sentries are excellent additions when defending these timings as forcefields can deny Roaches the ability to walk up to the Immortal and attack.

Towards the midgame, Immortals are not a unit a Protoss player should avoid. Even if the opponent starts without any Roaches or Lurkers, producing Immortals preemptively denies the transition for the Zerg player due to their bonus against armor, which is particuarly important in protecting the Protoss from a Lurker switch. For example, Hydralisk-based armies tend to transition into Lurkers making the Immortal necessary. Keep in mind that they also shut down Ultralisk transitions, which are another example of an armored unit.