On October 31, 2011, a trailer[1] was released on YouTube to introduce the 8 teams already qualified for Division 1. On November 8, 2011, additional details were given, including information about the qualification process.[2] Virus Gaming, which disbanded on November 1, 2011,[3] did not participate in Season 3. Therefore, an additional seed was available.

On December 27, 2011, incredible Panic announced a third division, the Russian Division. The format is the same as for the other divisions.[4] 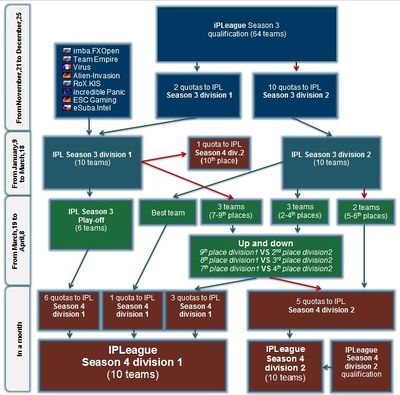 The qualified teams of Division 1 compete in a 6-team bracket:

The format is the same for the Division 1 Playoffs and the Russian Division Playoffs.

Each clan war is played with the following format:

The $1,500 prize pool will be spread among the teams as following.

Additionally, 3 Razer Arctosa and 2 Abyssus will be given to the victorious team.