Infestor (Heart of the Swarm) 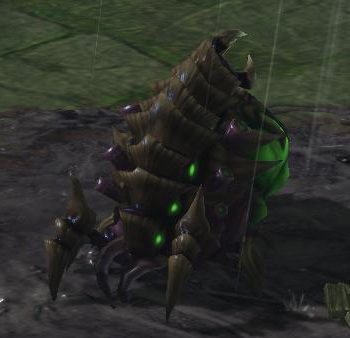 The Infestor is an offensive spellcaster, meaning that its abilities are used to harm enemy units rather than support the player's units. It can be built after the Zerg player has an Infestation Pit. The Infestor has three abilities: Neural Parasite, Fungal Growth, and Infested Terran. Infestors can move while burrowed as long as Burrow has been researched. Infestors must re-surface to cast any spell other than Infested Terran. It may be worth noting that the Infestor has the furthest range of vision (10) among the Zerg ground units and retains it upon burrowing.

Fungal Growth is very useful despite its relatively high energy cost. It is most effective against groups of clustered, weak units like worker units, Marines, Zerglings and Zealots. Immobilization prevents enemy units from fleeing, and can effectively prevent melee units from doing damage. However, affected units can still attack, and the ability cannot be stacked. This ability can be used on Cloaked and Burrowed units, revealing them for its duration. To underline the aspect of total immobility, Fungal Growth also inhibits the Stalkers' Blink ability and disrupts any transformations, such as Siege Tanks or Vikings switching between their modes. It also prevents Zerg units from burrowing, both up or down. Affected units cannot enter a transport unit(Medivac, Overlord, or Warp Prism). 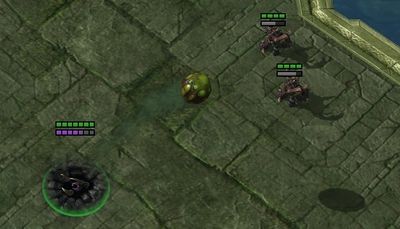 An Infestor, throwing an Infested Swarm Egg from underground

Infested Terran is a versatile spell that is excellent for harassment. Since Infestors can use this spell while Burrowed, they can sneak behind enemy mineral lines and cast this spell to severely disrupt the enemy's economy (especially when used with Fungal Growth), or to destroy key buildings without sacrificing portions of their main army. Infestors can also be paired with ground-attacking only units (such as the Ultralisk/Zergling) and spawn the Infested Terrans to deal with air units. Infested Terrans are highly disposable units (they cost nothing to create and automatically expire after thirty seconds) and, as such, can be spawned as the front line to tank damage while the main army is behind, semi-protected by the Infested Terrans. For example, spawning Infested Terrans on top of Siege Tanks is an excellent way to gain ground while causing the tanks to inflict friendly fire. They are also easily replenishable with a high Infestor count; an infestor gains 25 energy in approximately 44.4 seconds, meaning that a Zerg player can throw 3 Infested Terrans every minute for every 2 Infestors that he has in his attack. Coupled with an Overlord, an Infestor can spawn Infested Terrans across different levels of terrain for harassment. By hotkey binding the mouse scroll wheel to act as a left click, Zerg users can choose to either tactically drop Infested Terrans one-by-one or in a single, massive clump.

Research of Pathogen Glands should immediately commence upon the completion of the Infestation Pit. The additional 25 energy allows the Infestor to immediately cast Fungal Growth once it spawns. This is extremely useful considering the long build time. Zerg players usually begin building Infestors once Pathogen Glands is just past 30 seconds (out of 80) into research. As Infestors take 50 in-game seconds to build, this allows the first batch of Infestors to spawn immediately after the research is completed.

Neural Parasite is rarely used, although the spell can be useful on almost every powerful unit the Protoss player has. The main problem with using this spell is because of the low range it has, but if possible during a battle, taking a Massive unit to your side can help turn the tide of battle.

Fungal Growth is a useful spell in ZvP in many situations. Against attacks without a large amount of Sentries, and in large battles, the Fungal Growth is mostly used to "lock" units in place (and prevent Blink usage from Stalkers), so it is possible to get a surround on them with the low-range Zerg units such as the Zergling and the Roach. Fungal Growth also reveals cloaked units such as the Observer and the Dark Templar as well as dealing damage to them. Void Rays, due to their tendency to clump and relatively slow speed, are often targets for Fungal Growth, and can be ensnared in preparation for a Hydralisk or Mutalisk attack. Faster air units such as the Phoenix have an easier time dodging fungals due to their high speed, however.

Infested Terran can be used to absorb the high damage shots, such as the Colossus's attack and Psionic Storm. While they do not do high damage anymore since they no longer benefit from upgrades, they are still useful en masse as walls against a Zealot or Archon attack, damaging buildings (which benefit from shield but not armor upgrades), and rapidly expending Infestor energy to protect against Feedback from incoming High Templar. 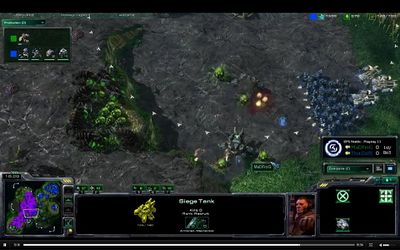 Neural Parasite should be used on any high damage or high cost units such as Battlecruisers, Siege Tanks and Thors. Since Siege Tanks greatly outrange this ability, Roaches, Zerglings, or even the eggs of Infested Terrans are often used to draw fire to allow the Infestor to get in range to use Neural Parasite.

Fungal Growth is extremely effective against a Terran Bio army. Bio units tend to fight in tight clumps, maximizing the number of units affected; two consecutive Fungal Growth will kill Marines. Furthermore, Bio units often use stutter step micro to exploit their mobility in combat; Fungal Growth eliminates this advantage, allowing Zerglings to surround them and Banelings to connect with the Marines. It is also used to immobilize and kill Medivacs to block Terran drop harass. In the late game it is often used to protect Brood Lords from Marines and Vikings. The spell has seen a drop in use due to changing into a projectile spell.

Infested Terrans can be used to draw the fire of Siege Tanks. With clever use of tunneling or cliff terrain, eggs can be thrown at Terran forces to bait tanks into causing friendly fire. They also serve as an effective complement to finish off fungaled Vikings or Ravens.

Neural Parasite is rarely used in this matchup because there are relatively few Zerg units worth controlling. Note that the Ultralisk is immune to this ability (Frenzied).

Fungal Growth, however, is an important spell in ZvZ. Because Zerg armies consist of numerous mobile units, Fungal Growth's immobilization is devastating to the opposing army. Although players primarily use it against ranged units, it can also render melee units such as Zerglings and Banelings ineffective. Note that Fungal Growth does not 1-shot either of them due to regeneration. Fungal Growth can also prevent units from unburrowing (including Ultralisks).

If enough Infestors have been built, it is possible to eliminate large forces of Mutalisk by reapplying Fungal Growth five times, provided the Mutalisks are stacked. Done correctly, this can potentially allow the Infestor user to wipe out his opponent's air force without incurring a single loss, as Fungal Growth outranges Mutalisks. Similarly, it is possible to safely eliminate Mutalisks by combining Fungal Growth and Hydralisks, whose range also allows them to strike with impunity. In reaction to Infestors, a Mutalisk player should try to send in a few Mutalisks at a time to pick off Infestors before a large engagement; since Infestors are so gas-intensive, players will often very rarely have any anti-air accompanying them, forcing the Infestors to inefficiently use their energy.

Fungal Growth can also play a massive role in large Roach battles, both damaging the opponent's Roaches and preventing them from achieving a good concave. This strategic advantage can cause enormous shifts in battles and is one of the most common units used in ZvZ. Because Roaches have a relatively short range, you can fungal them to clog up their lines of units in combat, allowing for more of your Roaches than your opponent's to be attacking at once.