The Intel Extreme Masters is ESL's flagship competition sponsored by Intel. IEM is a huge tournament spanning many months and individual competitions culminating in the Global Championships. While each year the games played changes, for Season V, StarCraft II will be played alongside Counter Strike 1.6 and Quake Live. Tournaments involved in the IEM range from small online qualifiers with $100 prizes to huge live events giving away upwards of 5 figure cash prizes to the winners of major events. It should be noted that not every event includes StarCraft II but for this article, we will only be talking about the StarCraft II portion of the events. 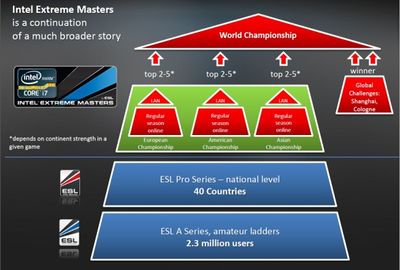 Intel Extreme Masters consists of events from all around the globe culminating in the World Championships.

The fifth season of the global league of e-Sports champions will also get its own show on a European TV station. Eurosport is a sports satellite and cable network, available in 59 countries and broadcasting in 20 different languages.

Eurosport will broadcast a multiple episode-show featuring the upcoming season. Each episode will focus on one event, one game and one star player of the Intel Extreme Masters. Both, hardcore e-Sports fans and the established Eurosport audience, will take delight in these episodes. The show will deliver exciting e-Sports, but also take a behind-the-scenes look at the players routines and challenges to prepare for this international gaming league with a total purse of $400,000 at stake. [1]

As the IEM is essentially a large string of tournaments, there are many variations between each:

Acting like the standard online ladders, people who top these ladders may get a chance to be invited to the Regional or Global Challenge events.

These are small online events that give a prize around $75 to the winners and places in the regional Championships to the top 4 players. These events are highly competitive as they are one of the "easier" ways to get into a Regional Championship event. These are also called "regular season cups."

While not directly part of the main championship, the Global Challenge events are part invite and part qualifier events. These are held all over the world, usually one in each major continent (Europe, Americas, Asia). In previous years, the top two from this event will unlock another qualifier spot for their country in the regional finals, but it is unknown if this is still the case. 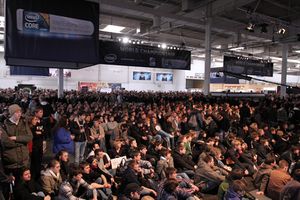 The regional championships are major live events for each major continent to qualify for the Global Championships. Top players from the region will play for a large sum of money as well as a spot in the global finals where the world's best will be decided.

Usually held around February-March, the Global Championships is a huge event that takes the best from each regional championship and pits them against each other. These events are generally huge, with masses of prize money and acclaim for the winners.

The rule-book is accessible for download on the official IEM site.[2]

As stated by the official rule-book:

Each minor penalty points deducts 1% of a players winnings while each major deducts 10%. Players accumulating a deduction of 30% or more are automatically disqualified. Deducted earnings are distributed evenly among the other contestants.