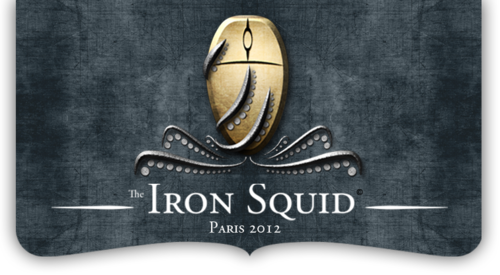 The Iron Squid is a starleague unveiled on January 14th 2012, which is organized and mainly broadcasted by Pomf et Thud.[1] The first season took place from February to May and gathered twenty players (initially sixteen, but four invites were added to the roster a week before the beginning of the tournament), eighteen invites plus two qualified players.[2] The early stages of the league (a round robin group stage followed by a single elimination bracket) were played online, while the semifinals and finals were held offline in Paris on May 5th 2012 at Le Grand Rex, the largest cinema, theater and music venue in Paris, where 2,500 spectators attended the show and witnessed MMA's victory over Symbol.[3] Pomf et Thud acted as hosts and main shoutcasters in both the shows and the main event, while TotalBiscuit and Apollo provided additional commentary in English.[1]

The second season was announced on September 27th 2012, with a roster increased to thirty-two players (including twenty-four invites). The league featured a GSL style double elimination group stage and a single elimination bracket, with the early stages of the tournament being played online and the semifinals and finals being held offline at Le Palais des Congrès in Paris, France.[4][5] TotalBiscuit and Apollo didn't return for the second season, the commentary in English being executed by Wolf, Khaldor, Day[9], Kaelaris and ToD.[6]