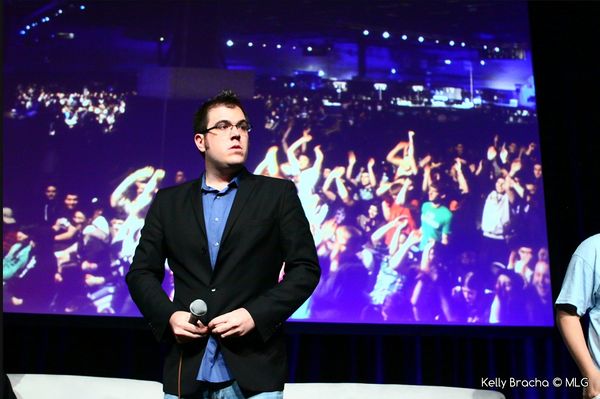 He is also known as JP McDaniel.

itmeJP was a popular community member in StarCraft II, and he also worked at MLG as the programming director and show host. JP has a degree in communication arts from the University of the Incarnate Word. Previously he broadcasted his content from San Antonio, Texas, later moving to Galveston, Texas where he worked from one of two MLG studios. JP McDaniel got his start in e-sports at gotfrag as a general worker. After MLG bought gotfrag, JP continued to work in the video game industry writing for several different sites until MLG picked up World of Warcraft, at which time he became a contractor for them.[1]

JP started producing StarCraft II content during beta with his very popular podcast State of the Game. It started on April 1, 2010, with guests Day[9], Louder, and Artosis. He also produced a popular show SC Center with co-host and long time community member Patrick "chobopeon" O'Neill. JP then became part of the MLGFAQ show, which was a question and answer formatted show on MLG.tv.[2]

State of the Game[edit]

State of the Game was a StarCraft II podcast created by esports journalist and enthusiast JP McDaniel. It was a show used to discuss the current happenings in the StarCraft II scene, whether it was foreign or South Korean, the pillars discuss it and their opinions. Throughout beta and Wings of Liberty, State of the Game had numerous guests and several host changes. The show was comprised of balance discussion, tournament happenings, and all related esports drama. It produced content which was regarded by many as especially humorous and qualitatively good.

Real Talk[3] was a show consisting of interviews with StarCraft II progamers and casters hosted by JP McDaniel. The goal of the show was to reach personalities of the gaming community and, "try to learn more about them other than what we know already". The show has featured people such as Hwanni, iNcontrol, IdrA, Grubby, 2GD, TotalBiscuit, Destiny, djWHEAT, Tasteless, NaNiwa, Husky, Tobiwan, Artosis, CatZ, and Carmac. The shows have been lengths of 40 minutes but no more than 3 hours. Husky's "Real Talk" episode was the first to be recorded live with viewers interacting with the show towards the end. Episodes were sometimes followed up by an 'After Thoughts', where the interviewee was asked questions from the community.

During beta JP created State of the Game and broadcast 7 episodes prior to the release of StarCraft II: Wings of Liberty. The cast of the show primarily consisted of JP "itmeJP" McDaniel, Sean "Day[9]" Plott, and Tyler "NonY" Wasieleski. Several well known members of the StarCraft I and StarCraft II community made guest appearances in these 7 episodes, such as Artosis, LzGaMeR, Jinro, TLO, CauthonLuck, and Tasteless.

After StarCraft II: Wings of Liberty was officially released, State of the Game became a rather regularly scheduled podcast, often airing every Tuesday starting August 24, 2010. Not long after it becoming a regularly scheduled program, it had a continuous panel of hosts. The original pillars were itmeJP, Day[9], Tyler, and iNcontroL. Since then it has had several well known guests, ranging from IdrA to HuK to Sheth.

Along with 'State of the Game', JP produced 'SC Center'. 'SC Center' recaped daily happenings in the StarCraft II scene, globablly, 5 days a week with co-host chobopeon. Oftentimes recent tournament results, team roster changes, upcoming tournaments, and patch notes are discussed. Currently on hiatus, but SC Center vod's are always available at JP's youtube. JP also has a second youtube channel. While it is no longer in use, it was used to host several series, such as 'JP and Friends', previous episodes of 'SC Center', and 'Friday Night Fights'.

JP played as Random[4] on ladder, reaching the rank of Masters league.

JP was also a well known caster and host for StarCraft II, having cast for Blizzard tournaments and MLG.

Departure from the scene and legacy[edit]

In 2013, JP began to step away from the StarCraft II community. The final recorded episode of his lauded 'State of the Game' was a year-end Christmas episode. [5] JP has since established himself as a popular livestreamer on twitch.tv, with variety game play, his 'Roll Play' series, 'Dropped Frames', and more. To this day, whenever a new talkshow is created in the StarCraft II community, it is common for fans to compare it to 'State of the Game' in terms of quality and entertainment.