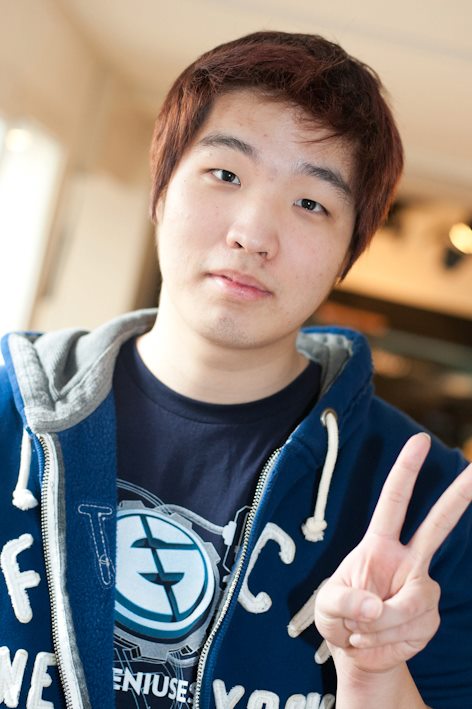 He is currently a commentator and observer for the GSL.

JYP was one of the earliest recruits picked up by Team SCV Life in 2010, along with players such as Rain. His first major competitive appearance for TSL was at the 2011 GSTL March season where he was picked as a starter in TSL's match versus Incredible Miracle. JYP would go on to make notable appearances at online tournaments such as the ESV TV Korean Weeklies.

JYP officially retired on February 12, 2015.[3] A few weeks later, it was announced that he would work as a commentator for GSL.[4]

JYP first qualified for Code A during the 2011 GSL August season. He eliminated anypro in the opening round, and then moved on to defeat DongRaeGu 2-1 in the round of 16. His next opponent, TaeJa, ended his Code A run by defeating him 2-0. He then participated in the August Up and Down Matches, where he tied for second in his group with MarineKing and TricKsteR with a score of 2-2. He beat TricKsteR and lost to MarineKing in the tiebreak playoffs to end up in third place, enabling him to keep his Code A spot.

In the 2011 GSL October, JYP made it back to the Round of 8 of Code A before being defeated by Oz. This performance once again placed him in the Up and Down Matches, where he tied for last in his group with a 1-3 score (only winning his game against Hongun). Thus, he once again placed into Code A.

For his third time in Code A in the 2011 GSL November tournament, JYP advanced to the round of 32 after defeating SaSe 2-0. He then lost to Bomber 0-2, but this performance was enough to secure him a spot in the Up and Down Matches. There, he placed second in his group with a score of 3-2, securing himself a spot in Code S.

During his run in this Code A he would face Miya in the round of 48 and proceed to defeat him 2-0 and advance to the round of 32 to face his newest teammate ThorZaIN. The match would start off in ThorZaIN's favor but JYP pulled through and took the series 2-1. In the round of 24 JYP would proceed to face Hack in a back and forth series that would end 2-1 in JYP's favor, securing a spot in Code S for the second time this year.

JYP made his Code S debut in the 2012 GSL Season 1 tournament. He dropped down to the Code A round of 48 after losing 0-2 against both sC and DongRaeGu in the first round. Back again in the Code A tournament, JYP defeated Life 2-1 in the round of 48 before losing 1-2 to HerO in Ro32.

On July 14, 2011, for the 2011 GSTL Season 1 Group A, Team SCV Life sent out JYP as their second player against SlayerS. The score was tied at 1-1 for both teams at that point. He wasn't able to take out SlayerS' Ryung and allowed SlayerS to further their lead at 2-1.

On August 11, 2011, for the 2011 GSTL Season 1 Group A, Team SCV Life sent out JYP as their starting player against oGsTL. JYP took out VINES and put TSL in the lead by a score of 1-0. for JYP, oGsTL sent out TheStC next and JYP wasn't able to defeat him. JYP's loss allowed oGsTL to tie up the score at 1-1.

On September 29, 2011, for the 2011 GSTL Season 1 Group A, Team SCV Life sent out JYP as their starting player against Prime. JYP took out Terius, AnNyeong, BBoongBBoong and put TSL in the lead by a score of 3-0. for JYP, Prime sent out MarineKing next and JYP wasn't able to defeat him. JYP's loss allowed Prime to lessen TSL's lead to 3-1.

On May 30, 2012, for the 2012 GSTL Season 2 Round 1, SlayerS-EG sent out JYP as their final player against ZeNEX. The score was in favor for ZeNEX at 4-3 at that point. JYP took out SuHoSin and TREME and allowed SlayerS-EG to make a come back and win the set by a score of 5-4.

On July 13, 2012, for the 2012 GSTL Season 2 Round 2, SlayerS-EG sent out JYP as their starting player against Fnatic. JYP took out ByuL, Rain, Moon and put SlayerS-EG in the lead by a score of 3-0. Fnatic sent out Oz next and JYP wasn't able to defeat him. JYP's loss allowed Fnatic to lessen SlayerS's lead to 3-1.

On July 6, 2011, JYP participated in the ESV TV Korean Weekly Season 1 Weekly 4. After taking down Daisy, Sleep, cOre, and Classic, JYP advanced in to the finals to face Life. In the finals, JYP defeated Life by a score of 4-2 and grabbed first place.

JYP's first offline tournament outside of Korea was IEM Season VI - Guangzhou where he placed second in his initial group, losing only to DIMAGA. In the playoffs, he lost to PuMa in the first round 0-3. At HomeStory Cup IV, JYP placed first in his group in the first group stage with a score of 3-0. In the second group stage, he once again placed first in his group with a score of 3-0. Moving onto the playoffs bracket, he beat DIMAGA 3-1. After losing 2-3 to MC in the semifinals, he went on to defeat viOLet 3-1 in the 3rd place match to secure himself a 3rd place finish.

On June 4, 2012, JYP was invited to participate in the IPL Fight Club. His first opponent was MarineKing. His debut was cut short as he was knocked out in his very first match up by a score of 2-5, and was not able to dethrone MarineKing.

On February 12, 2015, after not hearing any news from JYP for a long time, he finally announced on his stream that he had retired.[7]

With the beginning of the 2015 GSL Season 2 it was announced that JYP would work as an commentator from now on. JYP stated that he should be a good commentator since he is an ex-progamer.[8]