He played his first official StarCraft II match during the hybrid 2011-2012 Proleague Season 2.[2]

Jaedong played his first official StarCraft II match during the hybrid 2011-2012 Proleague Season 2 first round, and he was defeated by SK Telecom T1's Rain on May 20.[3] In early June, he was one of the eight KeSPA-affiliated players to be sent to the KeSPA exhibition tournament at the 2012 MLG Spring Championship, where he eliminated Leta before losing to Bisu.[4]

Due to his success in the 2011-2012 Proleague Season 2, Jaedong would be one of the two KeSPA Code S seeds for the 2012 GSL Season 4.[5] He was chosen by MC to play in his group, Group C, together with Curious and MarineKing and made his GSL debut on Wednesday, September 5. He would disappointingly go 0-2 in his group, winning only a single game against MarineKing and drop down to Code A. There, in his first match against finale, Jaedong would lose 0-2 to drop out of Code A and end his GSL debut.

Jaedong sprang back in the following GSL season, however, as he qualified for Code A after going through the brutal preliminaries. Jaedong beat Shuttle, Shine and PuMa to make it back into the GSL, only dropping a single game throughout his preliminary run. He then went on to defeat Sirius 2-1 in the first round, and LosirA 2-0 in the second. He faced Hack in the round of 24 for a Code S spot, but ultimately lost 1-2. In the Up and Down Matches, Jaedong was grouped with his Brood War rival Flash, and ended up beating him in their match. Despite ending the night with the same score as Flash, Jaedong's head to head win allowed him to place ahead of his rival, and secure third place for a shot at Code S via the Wildcard tournament. He was barely unable to qualify in the Wildcard matches, tying ByuN in map score but losing the head-to-head game. He subsequently fell out of GSL, losing to Lure in the first round of Code A.

On the 5th of December 2012 it was announced that Jaedong would be joining North American team Evil Geniuses.[6] He participated in the 2012-2013 Proleague as part of the EG-Liquid alliance. He had a fairly lackluster season, going 19-23, and more notably 6-14 against Protoss. Compared to Flash, who led the league with 44 wins, his poor team league performance stood out even more.

Jaedong participated in the 2013 WCS America Season 1 Premier League Qualifier on April 20, 2013, but was knocked out in the 11th round of the loser's bracked by teammate DeMusliM. He was still able to qualify for Challenger League through the Invite-Only Qualifier. He lost in the first round of Challenger League to theognis, but defeated Ian and Drunkenboi in the Group Stage to qualify for WCS America 2013 Season 2 Premier League. 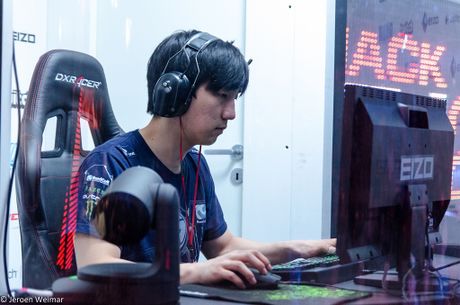 Jaedong took his first of many silver medals at 2013 DreamHack Open: Summer.

Jaedong had a strong series of performances in the 2013 DreamHack Open series. At DreamHack Open Stockholm, he took 3rd/4th, losing to NaNiwa. He also took 2nd place at DreamHack Open Summer and DreamHack Open Valencia, losing to StarDust and HyuN, respectively. His Summer run saw him go 6-0 in the first three rounds of the Bracket Stage against prominent players Stephano, LucifroN, and TaeJa. However, despite his strong performances, he was unable to win any of these tournaments.

During WCS America 2013 Season 2 Premier League, Jaedong went 8-1 in the group stages, losing a single game to puCK while defeating Snute, Ryung, and Oz 2-0. He narrowly defeated Jim and Scarlett 3-2 in the bracket stage, but lost 0-4 to Polt in the finals, forcing Jaedong to settle for second place.

At the WCS 2013 Season 2 Finals, Jaedong had impressive results against Protoss opponents, with twelve map wins and only two losses in the group and bracket stages. However, meeting a strong Terran player in the finals once again in Bomber, Jaedong was unable to overcome the relentless 3-base aggression of his opponent and lost 0-4 for the second tournament in a row, and took second place in his fourth consecutive finals.

In the first group stage of the WCS America 2013 Season 3 Premier League, Jaedong defeated TheStC and ViBE 2-0 each. He then defeated Heart and TaeJa 2-0 and 2-1 respectively to reach the quarterfinals. After narrowly defeating Hack, he fell to ByuL in the semifinals. At the Season Final in Toronto, Canada, Jaedong fell out in the group stage after being defeated by Genius and MMA.

After 5 second place finishes in premier tournaments, Jaedong finally emerged victorious at ASUS ROG NorthCon 2013. After defeating StarDust and Nerchio in the group stage, he bested elfi and INnoVation to reach the finals against foreigner hope Scarlett. A close series ended with Jaedong winning over Scarlett 4-2, thus ending Jaedong's streak of silver medals and granting him the title of the first StarCraft: Broodwar champion to win a premier tournament in StarCraft II.

Historically Jaedong's weakest matchup in StarCraft II, his ZvP has once more shown weakness in 2014, while his ZvZ remains among the best in the world. Facing only Zerg players in the playoffs, Jaedong was nevertheless defeated by Impact at the 2014 DreamHack Open Bucharest, and had to settle with a 3rd-4th place finish alongside INnoVation.

Jaedong was able to claim another championship from Lone Star Clash 3 in May. Jaedong faced State and Heart in Group C of the group stage matches and advanced out as first with a 2-0 score. He then went on to advance into the playoffs. In the quarter-finals, he had a close 3-2 series victory vs Stephano. This match was significant due to the fact that both players were very famous and well known for their own reasons, and many people were eager to see if Stephano had what it took to take down Jaedong after being gone from the competitive scene for almost five months. After defeating Stephano, Jaedong's next opponent, viOLet didn't give him much trouble as Jaedong went on to easily 3-0 viOLet and advanced into the finals to face Polt. After a fantastic series, Jaedong took a 4-2 victory and claimed his first championship for SC2 in 2014.

Jaedong would participate at HomeStory Cup IX where in the first set of groups he was able to beat Socke and fellow Korean player YoDa to advance. In the Round of 16 Jaedong was pitted against MC, HasuObs, NightEnD. Jaedong would defeat NightEnD 2-0 and HasuObs 2-1 to once again advance to the Playoff bracket. His opponent would be Korean Terran Player TaeJa whom many considered one of the strongest Terran players around, despite a close fought series Jaedong would end up losing 2-3 knocking him out of the tournament.