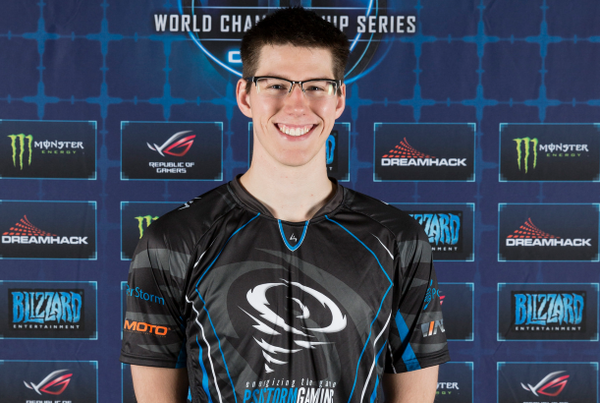 This New Hampshire native, JonSnow who has been considered one of North America’s top Zergs for quite a while now, especially after results such as a 2nd place finish in the Breaking Out Invitational, and obtaining the very sought after Challenger seed. Interestingly, Jarod was the only American player to qualify for WCS in both Season 2 and 3 of 2013. While narrowly missing the Challenger seed in the last set of qualifiers, JonSnow’s stature as Grandmaster on all three servers is a testament to his dedication to getting back into the WCS system, as well as dominating other tournaments. He has high hopes of the year ahead having most recently won Copa America Season 3 beating Hendralisk and HuK on the way to his crown.[1]

JonSnow managed to qualify for the 2013 WCS Season 3 America: Challenger League with wins 2-0 against MotoK, 2-1 vs Kreos, 2-1 vs ElhayM, and finally defeating Slam 2-0 to qualify. In the group stages of Challenger League, JonSnow fell to TaeJa 0-2, bounced back with a win over SeleCT 2-1 and finally was eliminated 0-2 to Revival.

In The Breakout Invitational, the newly Challenger league Zerg managed to put on a good show for the Starcraft community in the debut season of Breaking Out. Core Gaming's JonSnow was able to win his group stage dropping only one map. Defeating Bones 2-0, and Hellokitty 2-1, he easily advanced himself to the playoff stage of the tournament. JonSnow had a tough matchup in the first round, playing fellow teammate Sonic, however was able to edge his way to victory and get the team kill 3-2. In the finals, he unfortunately fell to SaroVati 1-4. Placing 2nd in the first ever Breakout Invitational was not a bad showing for JonSnow, able to win himself some solid recognition as well as $430.66.

JonSnow's first major tournament participation after his great showing in The Breakout Invitational and under his new team Solaris Gaming, was the Copa América 2014 Season 1. In the qualifiers, JonSnow was able to defeat devJunk 2-0, SixthElement 2-0, LsEbA 2-1, and Phog 2-0. He then played MajOr in the qualifier finals for seeding and lost 1-2. On in the main event, JonSnow first matched against wiNgiAN where he was able to take the victory 2-0. On in the winners match, he fell to MajOr again, 0-2. To advance through the group, he had to play the Terran player SenDoh where he was able to take it 2-0. In the playoffs, JonSnow played against ROOT Gaming's CatZ where he got eliminated 0-3. In his first ever major showing with his new team, JonSnow was able to finish a respectable 5-8th.

JonSnow participated in Copa América 2014 Season 2. He was able to easily qualify, going a combined 9-2 through the qualifiers, beating out players like MarineKing, SendauT, AlisoN, and Days. Only dropping one match in the qualifiers 1-2 to Suppy. He then went onto the group stages where he possibly had the hardest group. Sharing with other respected players such as MajOr, Days and desRow. He first matched against desRow, where he fell 1-2. In the losers match, he was able to defeat Days 2-0. Unfortunately in the advancing match, he played rival desRow once again and fell, 0-2, being eliminated from the season. He finished season 2 with a 9-12th placing.

JonSnow won his first large event in Copa América 2014 Season 3. In the qualifiers, JonSnow beat out Naps, Guns, and AlisoN with an undefeated record 6-0 to qualify for the group stages. JonSnow was able to make it out of his group in second. Beating out BLord 2-0, falling to HuK 0-2, then making it through with another victory over BLord 2-0. In the quarterfinals, JonSnow had to play a tough best of 5 series vs Cham, prevailing 3-2. Moving onto the semifinals, he was able to defeat hendralisk 3-1. In the finals, he got the opportunity to rematch against HuK who had already beat him in the group stages. JonSnow though this time in a best of 7 was able to conquer HuK 4-3, taking the final 2 maps to win his first ever large event, and the first person other than MajOr to win a Copa America since 2013 season 1. This victory was labeled as "Winter is Coming",[5] as it marks JonSnow's first tournament win. The term Winter is Coming derives from the first episode of Game of Thrones in which the character JonSnow plays a large role.

JonSnow was fortunate enough to win the qualifiers for The Breakout Invitational 3 making himself the first ever return player in the Breaking Out series, earning himself the nickname of the redemption Zerg. He came out strong, winning his group stage dropping just one map. Defeating PandaBearMe 2-0, and Bails 2-1, JonSnow was able to advance yet again to the playoff stages. Between the group stages and the playoff stages however, Breaking Out featured a series of showmatches where the break out players would play an already established professional player. JonSnow was the only breakout player who was able to win his showmatch, Beating hendralisk 2-0. Moving into the playoff stages, JonSnow had everything going for him with his solid group stage performance and cocky showmatch victory, but was quickly humbled by the up and coming Terran player Kelazhur in the first round losing 0-3. He was able to finish the Invitational in 3-4th place, winning $140.05.

JonSnow played in the qualifiers for BaseTradeTV's 32 Boys 1 Cup tournament. In the qualifiers, JonSnow played iRene where he won 2-0, then defeated blazefury 2-0, Creature 2-0, and finally his Solaris teammate Virium 2-0 to qualify. In the main event he was placed in a group stage with fellow foreign players Intense, HuK, and MajOr. He won his first match 2-1 vs Intense, in the winners match he played HuK where he lost 0-2. He then was eliminated from the tournament by MajOr 0-2.

Following his first major tournament win in Copa América 2014 Season 3 JonSnow qualified for the Copa América 2014: Grand Finals in Peru. On top of a free flight and stay to the foreign country and an excellent LAN experience, he was able to compete for a $5,000 prize pool with 7 other pro players in a double elimination bracket. In the first round, JonSnow matched rival, desRow. Typically struggling vs the Premier Protoss, he was able to defeat him 2-0. In the next round however, he matched vs HuK who was able to gain his season 3 revenge taking out JonSnow 2-0. So falling down to the losers bracket, JonSnow had some work. Having to play fellow Solaris Gaming teammate Cham. Fortunately for him, he was able to pick up the team kill 2-0 and move onto the next round against ROOT Gaming's CatZ. In two exciting matches, JonSnow was able to pick up yet another victory, 2-0. Now finding himself in the final 3, with a win moving him into the championship and a loss placing him 3rd overall. He matched again to Evil Geniuses HuK, but unfortunately fell 0-2. Placing 3rd in the 2014 Grand Finals, and earning himself $1500, on top of his free trip and experiences gained competing in a LAN environment.

The JonSnow and desRow rivalry is a very heated one in which is currently leaning heavily one direction. desRow is a very talented North American Protoss who over time has made work out of the Zerg JonSnow. Looking at the players side by side and their results, they would appear to be a very evenly talented match, but the match between the two say very differently. For whatever reason, desRow has continued time and time again to have JonSnow's number. First defeating him in the 2014 WCS Season 1 America: Ladder Wildcard 2-0. Then again, desRow managed to defeat JonSnow 2-0 in the Fragbite Masters 2014 Spring. desRow continued onto 6-0 when he was able to win again in the IEM Season IX - Shenzhen 2-0. In the Copa América 2014 Season 2 JonSnow was finally able to take a map off of desRow, but still fell 1-2. This rivalry is a prime example supporting the theory of mental blocking, where seemingly evenly talented players go completely one sided favoring one over the other.

The rivalry between JonSnow and Intense is quite new. The two of them have recently played many qualifiers and games against eachother, and often trading games and providing excellent matches and content. The start of the rivalry began during The Breakout Invitational 3, when the two of them ironically never even matched against eachother, despite being placed in the same group. JonSnow being favored to win the tournament as he was the only returning player from previous seasons, known as the redemption Zerg, Intense was able to pull it out, with JonSnow only able to place 3-4. Then in the 32 Boys 1 Cup, the two of them had the opportunity to finally match against eachother, creating one of the most hyped matches to see as they are two of the best upcoming American players in the scene. JonSnow was able to kind of steal some vengeance as he was able to defeat the Breakout champ 2-1. Unfortunately for JonSnow however, only 3 days later the two of them once again faced off in the IEM Season IX San Jose United States where Intense was able to defeat him 2-0. These two players also participate in the same practice group, often playing eachother as they are battling for the top of the standings regularly in house.[7] Continue to watch for the two of these players to continue to grind to the top of the America's, with high likelihoods of many future matches and beef to come.