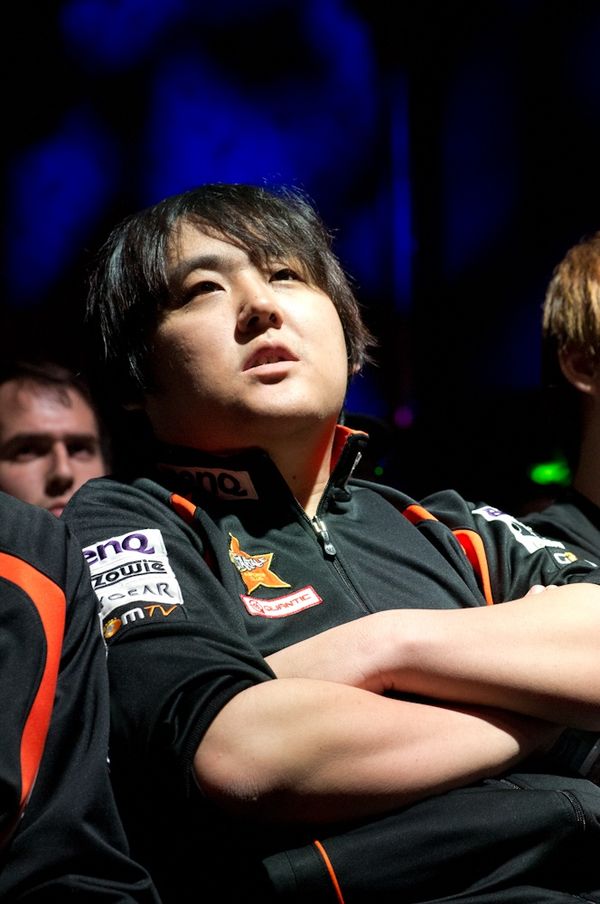 July is a Brood War Golden Mouse winner, and he is one of the most famous Zerg players in StarCraft: Brood War history. Sometime before the GSL Open Season 2, he switched to StarCraft II. He acquired amateur status from KeSPA, and he will not be able to return to Starcraft: Brood War pro-gaming for up to three years.

It is unknown as to whether July had access to any Beta accounts. In March 2010, he said in an interview he had played about ten games of StarCraft II as Zerg.[1]

Although it has never been oficially confirmed, July has been heavily rumored to have played under the ID FantaPrime.[2]

On September 15, 2010, he was announced as part of the StarTale with fellow former BW players such as RainBOw.[3]

July played in the Arena of Legends 1 tournament where he advanced from his group after beating NaNiwa and BoxeR 2-0. In the round of 4, he would play DongRaeGu and eventually lose 2-3, therefore securing third place. July would also play in the Arena of Legends: King of Kongs tournament due to his second place finish in 2011 GSL March. He would advance from the group stages second in his group, with a score of 2-1 and end up losing in the following round to LosirA 1-3.

July qualified for Code A in Jan 2011 and got to Ro8 before losing to eventual second place player ByuN. Being in Ro8, July was allowed to play in the Up and Down matches where he lost to Kyrix 0-2, but defeated former finalist Rain 2-0, qualifying him for Code S in March 2011.

In Code S of 2011 GSL March, July had a "group of death" consisting of GSL 3 champion MC and the previous season champion Mvp. July lost to MC, but recovered after he shockingly defeated the heavily favored Mvp twice in a row, knocking Mvp out of the tournament and qualifying himself for Ro16. He would advance into the semifinals after taking out Clide with a score of 2-1 and NaDa 3-2. July managed to reach the finals where he would once again be defeated by MC with a scoreline of 4-1.

After this impressive run, July would not have any notable achievements in Code S until GSL August, where he placed first in his group and went through HongUn and Ryung before being stopped by Mvp in the round of 4. In the following season however, July would take an early exit as he placed third in his group. He will be back in Code S next season.

From September 10th to September 11th, 2011, July participated in the IPL Season 3 Qualifier 3. July started off from the Round of 64. Polt defeated Cella, Lots, PhoeNix, and Tarson, in order to advance in to the semifinals to face MMA. He wasn't able to defeat MMA and fell down to the 3rd/4th place match. He was able to defeat KiWiKaKi by a score of 1-0 in the 3rd/4th place match and took third place.

July was one of the 50 players invited to participate in the North American Starleague. He was placed into Division 2. He finished the regular season as first of his group with a 14-6 map score. He the went through the finals defeating players like MorroW and Moon before eventually falling to PuMa and then to Sen to take fourth place.

July won the main event of the Clash of the Houses and thus was flown over to MLG Columbus where he fought through the open bracket to make it into the Championship round. He later lost to Moon after winning 6 matches in the Championship Bracket.

July attended DreamHack Summer 2011 in Sweden, along with where he was able to finish first in his group. He would ultimately drop series to both HuK and Bomber, leaving him with a fourth place finish.

It was announced on Sept 16th that July would be participating at MLG Orlando as part of the GSL-MLG Exchange Program.[4] He would place second in his group, losing only to HuK and then subsequently lose to HongUn in his first match in the Championship Bracket.