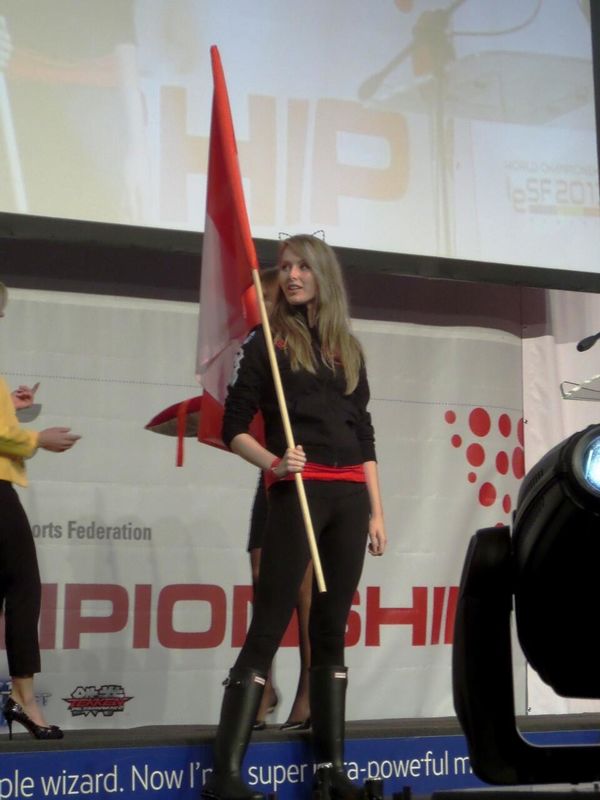 She currently lives in Toronto. She has a bachelor's degree in engineering and a minor in computer science.

Kaitlyn played Protoss in Brood War during middle school and high school. She began streaming Starcraft II in late 2012 after being convinced by a number of people including Livinpink while volunteering as a caster aid at NASL Season 3. [1] She quickly became one of the most popular streamers on tl.net, reaching rank 30 on the viewers*hours list by the end of the year.[2]

On March 2, 2013, kaitlyn attended LAN ETS 2013, but was unable to advance past the group stage after playing in a group that contained JakeBake, the previous year's runner up. She ended up going 2-2 in the group. [4]

She participated in the Overclock.net Starcraft 2 Invitational on July 6, 2013. She dropped from the first round of the winner's bracket, losing 0-2 to MaSa, and was eliminated after losing 1-2 to NuBrGNi.[6]

On November 1-2, 2013, kaitlyn was given the opportunity to participate in the IeSF 2013 World Championship by eSports Canada and her team Quantic Gaming.[7] In the group stage, she defeated the Israeli player jasJutsu 2-0, but fell 0-2 to Aphrodite's mech play. In the quarterfinals, she defeated the Finnish player Soyhi 2-0, but lost 0-2 to MaddeLisk in the semifinals to fall to a rematch in the third place match against Aphrodite. After taking a 2-0 lead in the series, she narrowly edged out a 3-2 victory to take third place in the tournament.

kaitlyn competed in the open bracket of the 2014 MLG Anaheim tournament on June 20, 2014. She lost 1-2 against the New Zealander Zerg Tilea in the Winner's Bracket, then lost 1-2 to the American Zerg Jowj.

kaitlyn's next appearance was at the 2014 Red Bull Battle Grounds: Detroit tournament on August 22, 2014. In the group stage, she lost her first match to ROOT Gaming's SuperNova before defeating her next two opponents, Ghostface and TheWalrus, to advance to the bracket stage. She was defeated by compLexity's qxc in the Round of 64 to conclude her tournament run.

On January 31, 2015, kaitlyn competed in the TorCraft Cup: Season 2 Round 2 Online Stage 2. After falling to NoRegreT in the quarterfinals, she won three consecutive matches in the loser's bracket to face NoRegreT in a rematch in the loser's finals, where she defeated him 2-0. In the finals she played against Believe and lost 0-2 to take second in the bracket.