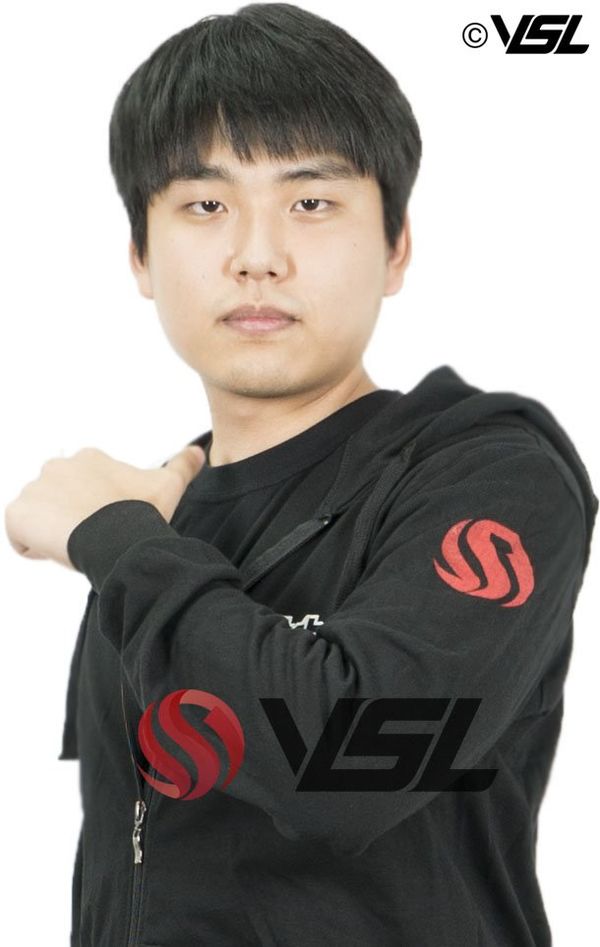 He gained fame for performing ceremonies after winning games.

Little is known about KeeN's Brood War career other than that he was a young prospect for Hite Entus playing with the handle "KeeN_Lt." He did not play any televised matches with the team, however.[1]

KeeN made his professional StarCraft II debut the Code A tournament of GSL May. KeeN quickly dispatched with former Code S players Choya and BanBans, qualifying him for the Up & Down Matches. Next he beat CoCa to advance to the Code A semifinals where he lost to MVP. He quickly gained notoriety for both his play and his post-game antics, modeled after his idol, Firebathero.[2] This reputation which eventually inspired a "Milgie Award" (a fan-conceived award for MLG contestants) for strange post match performances to be named after him.[3] In the May Up & Down Matches, KeeN beat TricKsteR 2-1, qualifying him for Code S.

The next month, KeeN played in the GSL Super Tournament, but did not perform particularly well, defeating, former GSL finalist, Rain before losing to jookTo, who had been knocked out of the GSL earlier in the year.

GSL July was not any kinder to KeeN as he was placed in a tough group that included NaDa, HongUn, and SuperNova. KeeN's loss to NaDa started the beginning of a rivalry between two that led to KeeN selecting NaDa in future GSL group selections.[4] KeeN was again seeded into Code S after prevailing in the Up & Down Matches. In the newly introduced format, KeeN beat aLive, BanBans, and InCa; the only game the KeeN dropped was to childhood friend Leenock.

KeeN was again seeded into a group with NaDa in GSL August, but did not play him. He did advance to the round of 16 via a win over Alicia and a split of two games against CoCa. KeeN stunned many in the next round by defeating Bomber by using an innovative two Starport Banshee opening in the first game and deflecting Bomber's cheese in the third. He lost to Polt in the next round, but retained his spot in Code S.

KeeN also played an integral role in Team MvP's victory in the GOMTV Starcraft 2 Team League. He had only played two games during the regular season of play, losses to NaDa and Happy, but KeeN scored the critical final wins in the team league finals against Prime's stars BBoongBBoong and MarineKing. This earned him the Gold Card award for being MvP's "Most Valuable Player."

In GSL October, KeeN again played in a group with NaDa, this time by selecting him in the group selection show in order to get his revenge for his loss to NaDa in July. This did not work out for KeeN; losses to NaDa and MMA sent KeeN to his third Up & Down Matches. He suffered two TvP losses to the up-and-coming Oz and GSL veteran HongUn, thus sending him to Code A.

During November, KeeN took a break from the GSL to travel to his first tournament in America, MLG Providence. He made a deep run in the open bracket, beating American notables Tyler and Spades before losing to fellow South Korean, HerO. KeeN continued his run by knocking Oz out of the tournament in the losers' bracket and MajOr in the championship bracket. His run was finally stopped by LosirA in the second round of the championship bracket, officially finishing in 28th place.[5] KeeN identified his performance as disappointing though, having been aiming for a podium finish.[6]

KeeN participated in 2011 GSL November Code A. Beating both Revival and YugiOh with a 2-0 victory, his next opponent was HuK. He again won 2-0, securing a Code S spot for next season.

He was eliminated from 2012 GSL season 1 Code S in Ro32, after losing to NaDa 1-2 and Puzzle 0-2, sending him back to Code A Ro32. He managed to reach Code A Ro24 after beating MacSed 2-0 and AcE 2-1. He then faced NesTea but lost 0-2. He would have to play in the Up & Down matches to get back into Code S. However he didn't succeed, going 2-3 in his group, beating Heart and Avenge, but losing to BBoongBBoong, Squirtle, and YugiOh.

Through 2012 GSL season 2 he achieved a very successful run, earning his Code S spot for the next season by eliminating Golden 2-1 and then proceeding to upset both NesTea and MMA 2-0 and 2-1 respectively.

On July 2, 2012, KeeN participated in the 2012 OSL Non-KeSPA Preliminaries. KeeN received a BYE in round one and then took down 구동연, Revival, Arthur, and faced Oz in the finals. He was not able to advance any further and had to take 2nd place after he lost to Oz by a score of 1:2.

KeeN qualified for TSL4 by defeating the then ZeNEX player Life in the finals of the 5th and last South Korean qualifier. The main tournament saw him defeat Eclypsia's Welmu in the first round securing a 3-0 victory over the Finnish Protoss. He would win two close series after that against foreign Zergs VortiX in the round of 16 and JonnyREcco in the round of 8 both series going to a final map. The round of four featured a qualifier rematch against the now StarTale player Life but he could not repeat his qualifier victory getting routed by the South Korean Zerg 4-1 sending him to the 3rd place match. There he was matched up against the teamless Terran Sting where he claimed a 4-0 victory over the Terran to secure a 3rd place finish.

On February 22, 2015, he announced that he had left his former team Invasion eSport.[7]

One day later, on February 23, 2015, it was announced that he had joined Prime.[8] Then, he became a staple in Prime's Proleague lineup, being fielded seven times (as of June 17, 2015, see 2015 Proleague Statistics). However, despite showing good games against opponents such as Losira and Life, he was unable to defeat any of them and lost six Proleague games in a row. On June 12, 2015, KeeN successfully qualified for GSL Season 3 Code A after defeating Axiom's Alicia. Three days later, KeeN was finally able to win his first Proleague match for Prime after defeating SKT's player Impact.

KeeN participated in the ASUS ROG tournament in late July 2015 but was eliminated in the round of 8 by the eventual champion, Losira. However, his form was improving at the time, as he was getting more wins for his team in Proleague. On September 25, KeeN finally won his first individual trophy in StarCraft II at the Gfinity Summer Masters II. He accomplished this by defeating the recently crowned WCS Premier League champion Lilbow, followed by Korean Protoss player MyuNgSiK, and finally the French Terran player MarineLorD.

On November 24, 2015, it was announced that he had joined team SBENU alongside Leenock.[10] In December, he failed to qualify for the first season of SSL, but managed to get into Code A, where he is scheduled to face Journey.