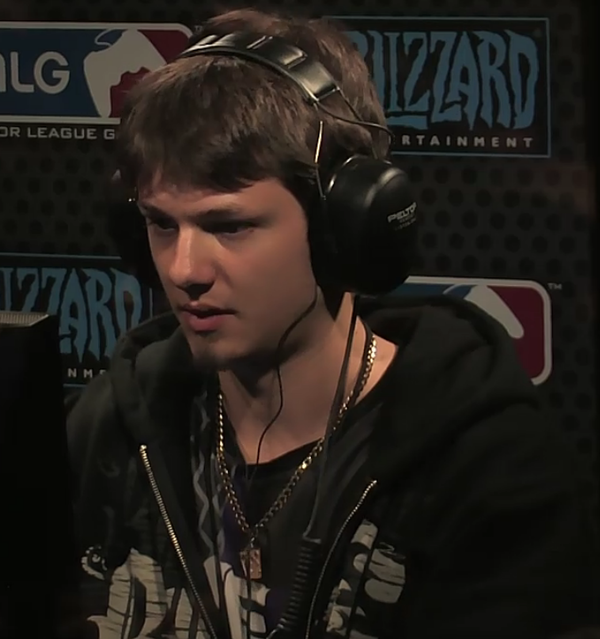 KiWiKaKi was a former French Canadian Warcraft III player who played in teams such as mTw and Serious Gaming. He is currently a Protoss player.

He is known for his very creative and intelligent play, popularizing use of the Mothership, and exhibiting creative use of the Archon Toilet even after patch 1.3 when it was nerfed. He favors heavy aggression and tech-heavy builds that require precise micromanagement to execute.

Before beta, KiWiKaKi mentioned in an interview that he would be switching to SC2 whenever possible[1] and would attempt to get into high rankings. As of April 29, 2010, he was ranked 8th in Platinum League Division 2 with a 60-18 (76.92%) score. KiWiKaKi played in many other events such as the GosuCoaching Weekly events and Team USA and Team Canada showmatches.

Opting not to compete in many beta events, KiWiKaKi became more active after launch. His first achievement was to come 3rd/4th in the IEM US Regular Season Cup #2 which gave him a spot in the IEM Group Stages and a chance to qualify for the IEM Season V - American Championships.

KiWiKaKi achieved significant fame when played in MLG Raleigh 2010 where he went through the Winner's Bracket undefeated before getting knocked into the lower bracket by HuK. From here he defeated Socke to get another chance to take out HuK in a best of 7. He would lose 2-4 to HuK to come second and take the $1500 2nd place prize in his first major StarCraft II tournament. Throughout this tournament he made heavy use of the 4 Warpgate Rush, causing Day[9] to dub him "King of the 4Gate". He would secure strong finishes in the remaining MLG 2010 events to obtain the first rank seed for 2011.

In MLG Dallas 2011, KiWiKaKi went first in his pool by defeating players such as IdrA and HuK. Although he would secure another second place finish after falling 2-4 to NaNiwa, he would be the only player to take sets off him in the tournament.

KiWiKaKi was one of the 50 players invited to participate in the North American Starleague. He was placed into Division 1. As of June 5, 2011, he was 11-6 in his group. He had 5 series wins and 3 series losses.

In June 2011, ROOT Gaming was acquired by compLexity. KiWiKaKi did not follow the majority of his former teammates into that merger. Instead, he and former ROOT teammate SLush both joined a newly created branch of the VTG Network dubbed Team ReIGN.[2]

KiWiKaKi was seeded into Pool B for MLG Columbus 2011. He went 1-4 in his group with losses to Sheth, MMA, SjoW and July, though he won against mOoNan. KiwiKaki's championship run was cut short, as he fell 1-2 to CrunCher. KiWiKaKi finished 14th, a result that was surprising to many due to his excellent performance in previous MLGs.

At MLG Anaheim 2011, KiWiKaKi was placed into Pool D, where he went 3-2. He lost to Mvp and GanZi, but swept SeleCT, mOoNan and Machine. His championship run was ended by SLush, who won 2-0. KiWiKaKi ended up keeping his 14th place from Columbus.

KiWiKaKi showed strong performance at MLG Raleigh 2011 going 4-1 in Pool D, beating NaDa, Sheth, mOoNan and Ret, but fell to PuMa who went undefeated in the pool. In the championship bracket, he was defeated by fellow Protoss player HerO 0-2, ending his run in the tournament. KiWi finished 10th.

KiWiKaKi played in MLG Orlando as well. He was seeded into Pool B, where he placed second last in his group, only beating iNcontroL. He would be swiftly defeated in the first round of the Championship Bracket by Stephano 2-0.

On April 25, 2012, KiWiKaKi replied to a person speculating in his fanclub thread as to why he retired with, "To focus on poker and Diablo3".[3] On May 7, 2012, he responded to a thread discussing his retirement with "I shall be back to make sick builds with new units",[4] hinting he may return to active play with the release of the next expansion.

On May 15, CatZ announced the rebirth of ROOT Gaming and KiWiKaKi as part of the roster.[5]

On September 10-11th, 2011, KiWiKaKi participated in the IPL Season 3 Qualifier 2. KiWiKaKi started off from the Round of 32. KiWiKaKi defeated Future, qxc, and Check, in order to advance in to the semifinals to face Stephano. He wasn't able to defeat Stephano and fell down to the 3rd/4th place match. In the 3rd/4th place match, KiWiKaKi found even more misfortune as he lost to July by a score of 0-1 and ended up taking fourth place.

On December 3, 2011, KiWiKaKi was invited to participate in the IPL Fight Club. His first opponent was Sheth. His debut was cut short as he was knocked out in his very first match up by a score of 2-5, and was not able to dethrone Sheth.