Korean 4 Warpgate All In (vs. Protoss) 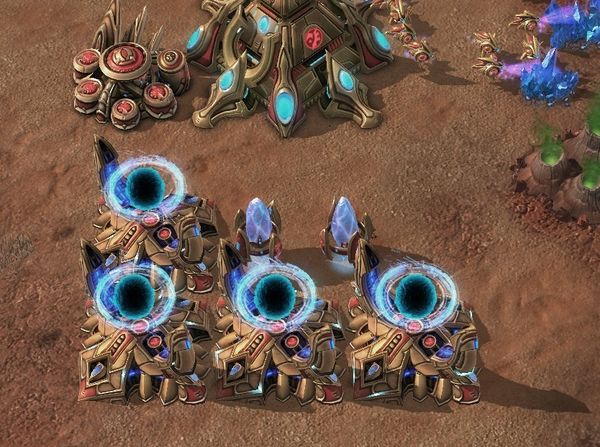 This article was written before patch 1.3.3, which added 20 seconds to warpgate research. The added research time is enough to nullify this build against a good opponent since, if your opponent is playing somewhat standard, the Zealot/Stalker come out early enough to kill the standard 4 proxy Pylons that one would place with this build. It is possible to build upwards of 6 Pylons to ensure at least one round of Zealot warp-ins, but this leaves you with far fewer minerals for the second round. Although this build can work if you can place a hidden Pylon in your opponent's base, it is a build that is only useful in very specific situations. In the upper spectrum of skill, it is almost always stopped.

The correct way to adapt build post 1.3.3 is to build Pylon at 8/10 instead of 9/10, and get Gateway and cybercore earlier. You will end up with a little bit less money, but it's as destructive as before 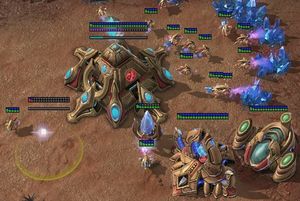 This image shows the signs of a Korean Warpgate All In

The classification of this as an "All In" is quite subjective. It is remarkably versatile, depending on the variation you play and the amount invested in the pressure. As such, it could be argued that the build is not strictly an all-in.

The build is easily scoutable by your opponent, especially if your opponent has unit status bars always turned on. Giveaways are:

This variation allows you to build gas units as well. This may be more effective in certain situations however it will leave you with a slightly slower warpgate and you will not be able to build as many Pylons in their main. It does, however, allow you to defend against another Warpgate Rush very well, this can be found in the appropriate section below.

General advice is to:

The following, more detailed advice assumes that you are playing a 1 Gate tech build, which is more or less standard.

After those first steps:

If he did not plant down any Pylons:

If you find a proxy Pylon:

You will be able to tell if your opponent is abandoning his plan by checking your opponent's base for any of the following signs:

If one of the signs appear you can probably resume "normal play", but be wary of the 4 Warpgate Stalker push. You're going to need at least 3 Warpgates + Robo or 4 Warpgates to hold that off. You should be ahead in Probes, so the game should be yours!

If you know that your opponent is going to use the 4warpgate strategy, the Kowi build is the optimal counter. This build also allows you to transition into a delayed 4warpgate build which still is a very strong opening against Protoss. The key points of the build is only use 2 Chrono Boosts on your Probes and get a quick second Gateway. When your Cybernetics Core finishes you immediately pump out 2 Chrono Boost Stalkers to deal with the Probe in your main.

For maps with small rush distances, the following variation on the Kowi Counter takes advantage of the fact that your opponent does not produce any early Zealots. Use the first two Chronoboosts at the same time as before.

There are varying degrees of failure with this build. Most of the time, however, you will be able to play into a midgame with a disadvantage. It is difficult to accurately give advice as to how behind you are, since it depends on your opponents Gateway count, Probe count, unit count etc. as well. Here are some very general guidelines - note that your experience with this build will give you a far better insight as to how the game is playing out than this guide can.

Able to warp in Zealots and kill Probes, your opponent was able to stop the rush though

This means you are equal, or ahead. With 4 warpgates you will have a lot of aggressive power and can transition into a blink Stalker build or some kind of quick unit pressure with a proxy Pylon. Just be mindful of what he is doing and you should be fine.

Was not able to warp in any Pylons

This doesn't mean you are behind, in general. Your best response is to send a second Probe and Pylon close to his natural. Warp in your first set of units at home if need be, and use them (along with your second set if timing permits) to get a warp in a closer Pylon. Chances are you will be able to overwhelm him with units. The more experienced player should win in this scenario.

Warped in 4 Pylons, cancelled some, built second Pylon in main, he is catching up in Gateway count, no Probe kills, no Zealot warps ins.

This means you are slightly behind with a playable disadvantage. Use the warpgates as best you can, typically you will transition into Stalkers. You should have resumed Probe production as soon as you decided not to follow through with the rush. You shouldn't be overly behind in Probe production since you will be chronoboosting your nexus and he will chronoboost his Gateway. The better player should win from this scenario.

Warped in 4 Pylons, cancelled some, built second Pylon in main, he is not catching up in Gateway count, no Probe kills, no Zealot warps ins

Since he is not building Gateways to catch up, build a proxy Pylon and you should be able to quickly overwhelm him with units.

This means you are slightly behind with a playable disadvantage, in general. If he cut Probes you will be equal, or better, however they usually do not cut Probes. You should be chronoboosting your nexus to make up for lost Probes. Use the warpgates as best you can, typically you will transition into Stalkers. The better player will usually win from this scenario.

Warped in 4 Pylons, tried to warp in Zealots, did not kill any Probes

This means you are significantly behind. Chances are you will not be able to recover from this. Best bet is to plant a forward Pylon and try to Stalker all-in him.

Warped in 4 Pylons, warped in Zealots, got completely crushed

The game is pretty much over. Chances are you will not be able to recover from this. Best bet is to plant a forward Pylon and try to Stalker all-in him.