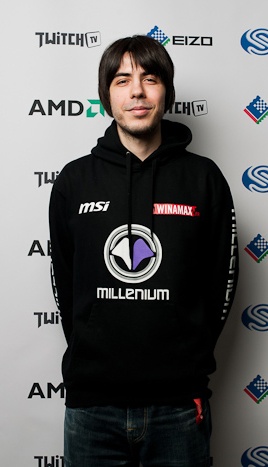 He is also a writer for Swedish esports website rakaka.se and has written several articles in English criticizing StarCraft 2, mainly focusing on its mechanical depth.

Originally a casual Brood War player, LaLuSh saw the SC2 beta as a chance to succeed early on and secure a foothold in the competitive scene.

LaLuSh performed strongly in the early ladder stages and quickly took high positions in his platinum league. He won the ESL SC2 Beta Launch Cup after defeating random player MinD in the finals. Shortly afterwards he placed second in an ESL weekly. Because of his results in the weekly ESL events, he earned a place in the first Go4SC2 Monthly Final.

LaLuSh was chosen by Liquipedia to be the star of the first episode of the Liquipedia TV Strategy Hour, consequently coining the LaLuSh build.

LaLuSh managed to qualify in the second round of the IPL2 Qualifiers defeating White-Ra and Nadagast to advance.

Throughout StarCraft 2's history LaLuSh has written various articles pointing out flaws in the game and suggestions for improving it, especially in comparison to its predecessor StarCraft:Brood War. The most notable ones are:

During the beta period of StarCraft 2's Legacy of the Void expansion, LaLuSh has contributed to the discussion to change the economic model of the game,[1][2] and wrote an article comparing Blizzard's approach to listening to the community with Valve's.[3]