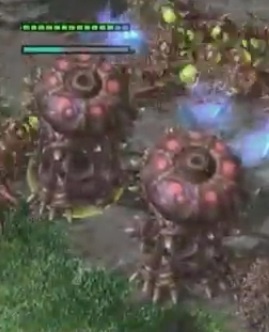 The second Spire was not an accident
Strategy Information
Creator(s):
[[

The Leenock Double Spire build is a variation on the common Muta/Ling/Bane ZvT which increases the effectiveness of Mutalisks in direct confrontations. The build was first showcased during the 2011 GSL November Code S Finals vs jjakji where, although well executed and surprising, Leenock lost both games he used it in.

The double Spire build is an adaptation of the standard Zerg Muta/Ling/Bane strategy which utilizes Baneling landmines to kill Marines efficiently and therefore reduce the number of Banelings required to defend the standard Marine/Tank aggression. The amount of gas freed up by this reduction in Baneling numbers allows for a second Spire to be added for faster air upgrades and a stronger Mutalisk centered mid-game.

The goal of this build is to combat the strength of typical Terran Marine/Tank aggression with a more intelligent use of Banelings, which frees up gas for a more powerful Mutalisk cloud to control the mid-game. The mobility and strength of those mid-game Mutalisks allows for expansions to be taken without much fear of Medivac drops and other forms of Marine harassment, while the threat of Baneling mines defends stronger, more direct Terran aggression. This strong mid-game aims for a very gas-heavy late-game transition into Infestors and Brood Lords, with enough gas income to potentially use any of the late-game Zerg Tech.

It is important to keep track of a Terran army's position, as it can indicate where Baneling mines should be placed. Do not underestimate the power of Baneling mines behind an enemy army, as even the most cautious players will often assume their reinforcement, or retreat is clear and a pair of Banelings can kill enough Marines to allow the Mutalisks and Zerglings to destroy everything else.

Execution is very similar to standard Muta/Ling/Bane play with a few small adjustments.

Hive is delayed until 200 supply, which generally means a 3/3 upgrade on air units will be of a more immediate effect than a Greater Spire, but with no units being immediately mutated this allows the possibility for relatively varied late-game Tech switches. The standard late game for this build is Infestor/Corruptor/Brood Lord which takes advantage of the above average flyer upgrades taken in the mid game off the double Spire. This can be done after a 3/3 or alongside a single flyer upgrade like Flyer Carapace Level 3, which allows for earlier Brood Lords with a small sacrifice of a weaker initial attack. It should be noted that Broodling attacks are affected by Melee Attacks Level 3 which can still be evolved from the Evolution Chamber while both Spires are occupied with mutating Flyer Carapace Level 3 and a Greater Spire. A less standard, but possibly more surpising late-game transition could be done by creating an Ultralisk Cavern and replacing lost Zerglings or Mutalisks with Ultralisks. This can be a strong transition to deal with players who overreact to the quick 2/2 Mutalisks or produce high numbers of Vikings, expecting powerful Brood Lords but ultimately lacking any strong way to deal with a heavily armored ground force.