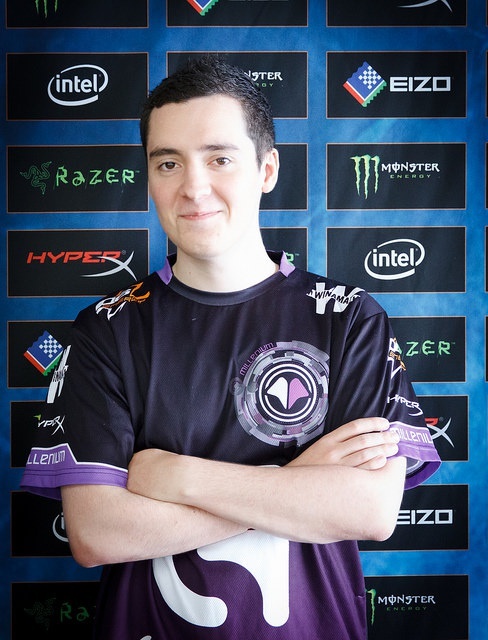 David "Lilbow" Moschetto (born June 25, 1995) is a French Protoss player who is currently playing for Altar.

David "Lilbow" Moschetto is a Grandmaster player who often participates in Go4SC2 and ZOTAC events.

On January 22, 2014, it was announced that he joined the team XMG and will be training at the mYi teamhouse.[2] The same day, in WCS Challenger league, he defeated the Polish Zerg player Tefel 3-2, and consequently earned his spot in the WCS Europe Season 1 Premier League.
On March 18, 2014, he won 4-0 over Dayshi to become the Underdogs Season 6 champion.
On March 21, he won 4-1 over ToD to become the Francophone Championship/Season 4 champion.
On May 24, 2014, he won 4-1 over MarineLorD to become the Underdogs Season 8 champion. One month later, he beat MarineLorD again 3-0 to win his 2nd consecutive Underdogs.
On December 1, 2014, he joined Millenium.[3]

In the 2015 WCS Premier League second and third seasons, Lilbow stated a case for being the best foreigner. In the Season 2 finals in Toronto, he advanced all the way to the Season 2 grand finals (becoming just the second French player to make a WCS final, with the first being Stephano in 2013 Season 1) where he took second behind Hydra. In the Season 3 finals in Krakow, he went one better by winning the event, beating Hydra in a rematch in the quarterfinals and then capping it off by overcoming home favorite MaNa in six games. It meant that Lilbow became the first foreigner to win a WCS Premier League title, the first foreigner to win a Premier tournament with Koreans in the field since Sen at the 2014 Taiwan Open and the first foreigner to advance to the WCS Global Finals at BlizzCon since NaNiwa in 2013. Lilbow faced Life in the round of 16 at the 2015 WCS Global Finals and got swept 0-3. He later took to Twitter and Facebook to explain that he did not prepare for the tournament, as he was practicing Legacy of the Void instead,[4] which drew upon complaints from part of the community.[5]