Locust (Legacy of the Void)

This article covers the current multiplayer version of this unit. For another version see Locust (Heart of the Swarm). 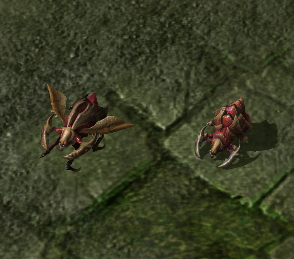 The Locust is a temporary unit with timed life that is spawned in pairs by a Swarm Host. After spawning, Locusts begin as flying units and are unable to attack. They will fly over terrain until they use the Swoop ability to land and engage targets. The Spawn Locust ability has a cooldown of 43 seconds, and the Locusts live for 18 seconds..

In ZvP Locusts can be used to force the Protoss to move units and expend Psi Storms. Constant repositioning of the Swarm Hosts and only spawning some of the Locusts at a time can force the Protoss to reposition. In combination with Ravagers, Locusts can help a Zerg batter down Protoss armies by pinning them in place with cheap units. Care is needed becaues the Swarm Hosts are unwieldy and vulnerable when recharging. In the final series of the 2018 WCS Global Finals (VOD), Serral used them in several games against Stats to great effect. The 2019 WCS match between Rogue and Neeb was notable for several highly effective Swarm Host contains[1].

Locusts are typically sent en masse into Terran positions. If the Terran does not commit significant forces to defence, large groups of Locusts can deal significant damage to a base or encamped army. A Terran player will typically employ Siege Tanks against a Locust threat. Tanks in Siege Mode have excellent range and splash damage, making them the most cost-effective unit to defend a position against Locusts. Having the Locusts land right on top of Siege Tanks unsupported by other Terran units could force them to hit one another with their splash damage.