The Lost Viking is an arcade minigame playable in the Wings of Liberty Campaign, accessible from the Hyperion Cantina in between missions. 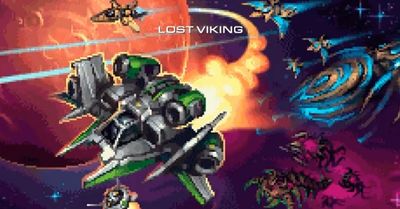 The game is a classic top down space shooter in which the player controls a Viking. The object of the game is to progress as far as possible or achieve the highest score, done by dodging a variety of enemies and projectiles, while destroying them with your own projectiles.

There are three stages of the game; stage 1 features Protoss enemies, stage 2 Zerg enemies, and stage 3 Terran enemies. When the first three stages are cleared, there is a short ending cinematic showing the "Lost Viking" returning home. Afterwards, the player can choose if he/she wishes to continue playing. If yes, the stages repeat with slightly increased difficulty. The stages can be repeated as long as the player has lives remaining.

Throughout the game, various powerups will appear and float around the screen. When collected, they give players different or stronger weapons with which to destroy their enemies. Each weapon has two levels, so if the same powerup is collected twice, it will become more powerful. If a player is destroyed and loses a life, any active weapons they had are returned to floating powerups, where they must be collected again. While floating, the powerups periodically change to a different powerup, allowing the player to bide their time until the desired weapon appears. The available weapons, as well as the order of rotation, are as follows: 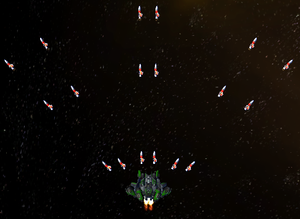 Side Missiles are one of the two primary projectile weapons. Each powerup of side missiles adds an additional diagonal stream of projectiles to each side of the Viking. While each missile is relatively weak, they are excellent for doing area-of-effect damage to large numbers of enemies. 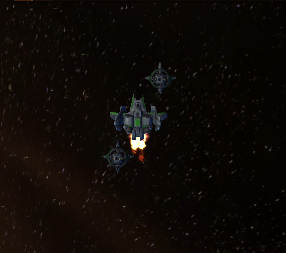 When drones are collected, they do not overwrite the current weapon, but rather hover around the player's Viking. When the active weapon is fired, each drone will also fire a small heat seeking missile at a nearby enemy. Additionally, if a player is hit by an enemy projectile, one of their drones will explode instead of the Viking, saving them a life. A maximum of two drones can be active at a time. 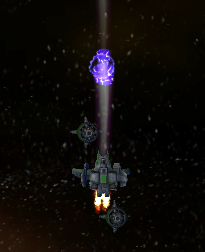 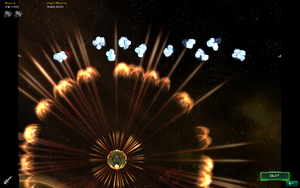 Bombs can be collected and used alongside your primary weapon, but there is only a limited amount. When used, a bomb clears the screen of all enemies (aside from bosses) and enemy projectiles, and grants several seconds of immunity to the Viking. Bombs are best saved for situations in which an enemy projectile is unavoidable, so as to save yourself from losing a life.

A recommended strategy is to use the following priority system when collecting powerups.

The primary weapon (either side or plasma missiles) is a matter of personal and situational preference. Side missiles are weaker but allow for easier widespread damage, while plasma missiles do more damage, but in a confined area. You may prefer one style over the other, or change between stages based on the type of enemy.

As mentioned earlier, save bombs for situations where being hit is inevitable. Later in the levels, you should be able to build up a nice stockpile of excess bombs, which, If used at the right time, can save you from the majority of deaths. When in doubt, use a bomb; wasting a single bomb is better than wasting a single life.

Also note that holding the space bar is NOT the fastest rate of fire possible. You will get faster firing and likely much better results by tapping the space bar repeatedly rather than holding it down.

The name "Lost Viking" is a reference to Blizzard's 1992 console game, "The Lost Vikings".