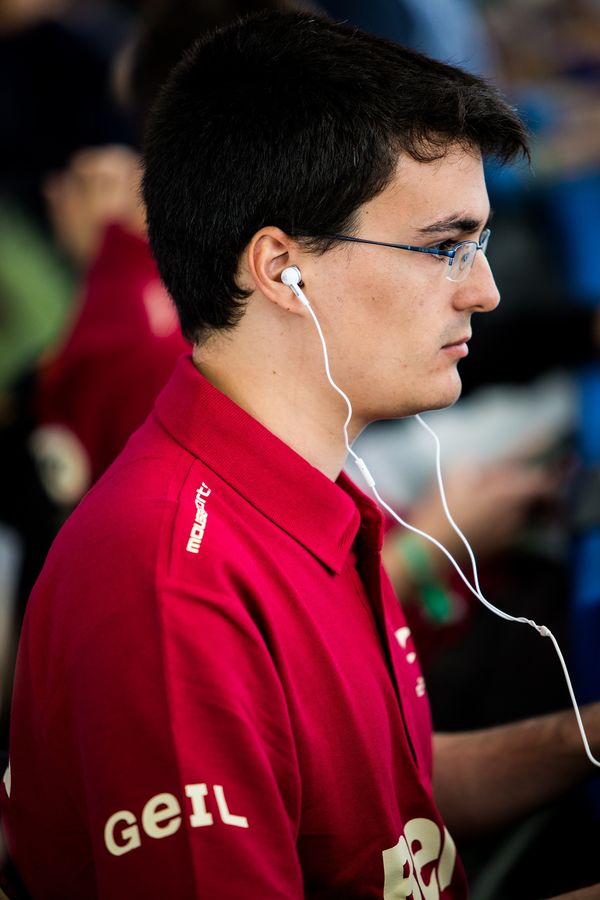 He was very active in Warcraft III, and he is the older brother of VortiX, another Spanish progamer.

In Warcraft III, he won the ESWC Asia Masters of Cheonan competition and finished second in the Blizzcon 2008 Warcraft III tournament, earning him acclaim and recognition.

After being unsponsored for all of StarCraft II beta, on August 12, 2010, it was announced that LucifroN would be joining Fnatic's StarCraft II Team.[1] In February 2011, he left Fnatic to join the Spanish Team Aprender.[2] On November 25, 2011, LucifroN announced that he was leaving team Aprender and retiring temporarily, because he couldn't keep spending so much time playing.[3] On February 24, 2012, he came back to activity and joined the Spanish organization Karont3 e-Sports Club.[4]

LucifroN was placed first in StarCraft Beta 2 Platinum Division 2 using the id LucifroNNNNN. He also won the ESL TV Pro Invite Cup with strong execution of a 1 Rax expand into 3 Rax push build. He is also known for his very aggressive, micromanagement oriented style, very common for Warcraft III. While very strong during early stages of beta, LucifroN stopped playing the Beta to focus on his school studies.

LucifroN was very discrete during the first two years of the game, prioritizing his studies over a professional gamer career, mainly because he considered already having reached his pro-gamers expectations during his Warcraft III career.[5] He played mostly in the summer events, during his student vacations. He got his first major result pretty quickly, a 3rd place finish in Go4SC2 ESL Cup #24. While not normally a notable result, this also qualified him for the IEM Season V - Global Challenge Cologne, the first premier live StarCraft II event in Europe. He was seeded in group C, with DIMAGA, SarenS and HasuObs. Unfortunately for him, Brood War veterans showed their dominance over the Warcraft III players, as him and HasuObs ended third and fourth, both with a 1-2 record and thus were eliminated. In November 2010, LucifroN along with Fnatic team member Fenix would be one of the 16 global invitees to the DreamHack SteelSeries LAN-tournament. LucifroN failed to make it out of the group stages with a score of 1-2, with a surprising upset by ActionJesuz. After several months without any notable results, LucifroN made his return to the European pro scene on August 2011 after winning ZOTAC Cup#69 with a 3-0 victory over online prodigy Nerchio. This victory allowed him to participate in ZOTAC Cup's August Monthly Final where he took down Adelscott, Seiplo, and Nerchio to end with a 2nd place after a 2-3 loss to GoOdy. 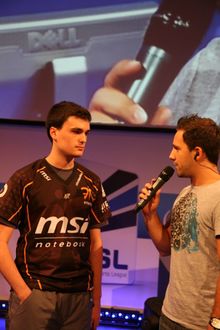 LucifroN at IEM Season V Cologne during his time on Fnatic

Later in 2011, LucifroN participated in the DreamHack Valencia Invitational as the Spanish representative after beating his brother VortiX in a Showmatch organized by DreamHack.[6] He was knocked out in the first round 2-0 by eventual winner DongRaeGu. After that, he announced a temporary retirement [7]

In 2012, LucifroN would return to competition by participating at The Gathering 2012 in Hamar, Norway. Despite coming out of retirement, he showed a dominant play, and win the tournament, beating by 4-1 Brat_OK at the grand final, winning his first major offline StarCraft II event. One month later, he was invited to play in the online tournament SCAN Invitational #5, he destroyed all of his opponent, including DIMAGA and ThorZaIN, who just had won the DreamHack Stockolm 2 weeks ago, not losing a single map in the process.

He would then played in his national championship, WCS Spain. Once again he made a short end of any opposition, and won the tournament with a 10 to 0 map record against players such as VortiX and AlaStOr, earning 4,000 € and qualifying himself for the European Final. During the summer, he played in Season 9 of Spanish EPS, which he was the reigning champion. Once again he played against his brother in the finals, but this time he was unable to defeat the rising Zerg, and thus ended up second, still securing €600. On September 15-16th, LucifroN represented Spain while participating in 2012 World Championship Series Europe. He defeated Happy, DarKFoRcE, and Socke in his way to the winner bracket semifinals, where he lost to Stephano in an amazing series by a very close 1-2 score. In the lower bracket, he defeated his fellow Warcraft III former Grubby and LoWeLy, reached the lower bracket final. He then lost to his brother, VortiX, placing third in the tournament and securing a spot for the world final. On November 9, 2012, he played in the Stim to the Win Tournament. He showed stellar TvZ by defeating Nerchio 3-0 and convincingly winning 4-1 against Stephano at the grand final. During the 2012 Battle.net World Championship, he made it easily out of his group, beating LoWeLy and Insur, but then he had to play against VortiX for the third time in 3 WCS events. Like in the European Final, he was unable to overcome his brothers, and thus was eliminated in the round of 16. Later in November, LucifroN participated in IEM Season VII - Singapore. Placing second in his group going 4-1, he proceeded to the round of 12, where he lost to eventual tournament winner Sting in a close series 3 to 2. Lucifron also played at IPL 5 but his run was quickly ended when he lost to viOLet in the winner’s bracket and again VortiX in the loser’s bracket. During the month of December, he mainly participated to online tournament, taking third place MSI Pro Cup Worldwide by defeating the French Zerg Stephano in the bronze match, winning the PokerStrategy.com League and the HP Trophy 2 with his brother.

In January 2013, Lucifron played in IEM Season VII - Katowice, but his tournament went exactly the same way as in Singapore, getting out of his group with second place, but then lost to a fellow Terran in the round of 12, this time the Macro Monster Kas. On February 7, 2013, LucifroN participated in IPL D.I.C.E. Showdown in Las Vegas. He reached the final after beating Grubby at the first round and Scarlett at the winner bracket final. LucifroN faced Scarlett again at the grand final, convincingly beating her with a 3-0 score and becoming the champion of the tournament. February was a good month for him as he won the Vasacast Invitational 2013, ten days later, beating his brother for the first time in 8 months in official competitions during the semifinals, and defeating Fraer in the grand finals. In March, he played in the ESL Pro Series Spain Season 10, he once again was able to defeat his brother in the finals, winning the tournament and thus was crowed the last Spanish Champion of Wings of Liberty.

His first premier tournament on Heart of the Swarm was IEM Season VII - World Championship. Unfortunately, he showed some lack of training in the new game as he was crushed out of his group with a 1-4 record, only winning to HasuObs. His poor performance was partially explained since he was still playing WoL for the RSL Season 4, his last Wings of Liberty event, where he placed second after defeating players like Oz and MMA, but was unable to take a map out off HyuN, losing 4-0 in the grand finals.

In the first half of 2013 Lucifron has been very active in online tournaments, both for team and individual events. Notably in team events he participated in the EMS Spring Cup while on Karont3 e-Sports Club where he scored wins over players such as Tefel and beastyqt. He also played often in the Acer TeamStory Cup first for Karont3, and then for mousesports after joining that team on May 30, 2013.[8] There he has often played as the ace, and he has scored wins over many accomplished players inclduing HerO, MaNa, HyuN, and ForGG.

As an invite to the WCS EU Season 1 Premier League Lucifron was seeded into Group B of the Round of 32 along with Happy, Bly, and HasuObs. Lucifron was able to beat Happy and then Bly 2-0 to advance to the Round of 16. There he was placed in Group C with Mvp, Nerchio, and SaSe. Once again Lucifron would advance in first place with 2-0 wins over Nerchio and Mvp. In the quarterfinals he would play ForGG, who would beat him in a close 3-2 series in which ForGG came back from a 0-2 deficit to win. In the placement matches to determine who would attend the Season 1 Finals he would beat BabyKnight 3-0, but lose a 1-3 series to TLO and would thus miss out on attending the finals.

During that time he attended several other individual tournaments. On April 26, 2013 Lucifron entered the 2013 DreamHack Open: Stockholm. He was seeded straight into Group Stage 2, where he was put in Group J with YugiOh, Strelok, and Timestamp. After a 3 way tie for first between Lucifron, YugiOh, and Strelok was unbroken after 2 tiebreakers, Lucifron was eliminated by random drawing.

Lucifron also in this period qualified for the finals of the EIZO Cup. There he topped out Group B with wins over Happy, Socke, monchi, DIMAGA, and Nerchio. In the final bracket he was able to beat HeRoMaRinE and then Grubby to win the tournament.

After his Season 1 WCS run was complete he entered the 2013 DreamHack Open Summer on June 15, 2013. In Group Stage 1 he was placed in Group 27 with Hidden, Harpner, and Bunny. He was able to beat all of them, and advanced to the next stage with only a single map lost to Bunny. In Group Stage 2 he was placed in Group 10 with Harstem, Feast, and Avekatten, and although he lost to Harstem 2-0 wins over Feast and Avekatten was enough for him to advance to the next round. There he played in Group 8 along with StarDust, Sonder, and Snute, and he advanced out of the group in first place after 2-0 wins over Sonder and StarDust. In the Final Bracket he was able to beat Dayshi 2-1 in the first round, but would lose in the quarterfinals to Jaedong. In the Consolation Bracket he would lose in the first round to TLO.

Before the start of WCS EU Season 2 he also participated in some online tournaments. Notably he was able to qualify for the Go4SC2 June Final, where he was able to beat his brother VortiX, but lost in the second round to ShoWTimE.[9] He also is playing currently in the Ritmix RSL Season 5, where he made it to the playoffs after topping out his group with wins over ThorZaIN and Bly.

Having made it to the Round of 8 of the previous season, Lucifron is automatically qualified for WCS Europe Season 2 Premier League. In the Round of 32 he was placed in Group F with NaNiwa, uzer, and Bly. Although he suffered an initial loss to NaNiwa, he was able to beat Bly and then uzer to come in second in the group and move on to the Round of 16.