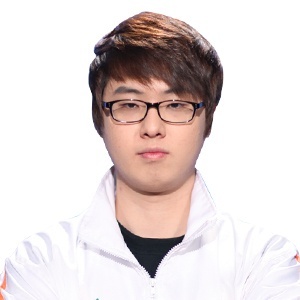 Before fOu was acquired by FXO, Lucky was team captain. On October 24, 2014, Incredible Miracle announced that Lucky would soon join the military.[1]

Lucky debuted in the 2011 GSL August Tournament, managing to win 2-0 over Jinro before falling to jjakji in the next round. In the next season, Lucky would reach the Round of 8, and played in the Up and Down Matches for a chance for Code S. However, he would end up third in his group, just out of the range of Code S, so Lucky would have another chance to compete in Code A next season.

His second time during Code A would be in the 2011 GSL November tournament. There he was able to defeat NaNiwa 2-0 in the Round of 48. His next opponent in the Round of 32 was the famous NaDa, whom he defeated 2-0. Lucky then faced GanZi in the Round of 24, but was defeated 1-2.

Lucky's debut in Code S was in the GSL Season 1 2012. He would end up placing third in his group, only beating IdrA, dropping down into Code A.

On May 18, 2012, Lucky participated in the EWM Season 2 Week 8. Lucky received a BYE in round one and then went on to take down Galaxy, Min, Noblesse, and TREME to advance in to the finals against Revival. Lucky defeated Revival by a score of 2-1 and advanced in to the EWM Season 2 Finals where he would have a shot to obtain a Code A seed if he won against the other weekly winners.

Lucky truly made his name during IGN ProLeague Season 3. He earned his spot in the main event by making his way through the live qualifier, and then went on an impressive run. He was able to defeat BoxeR, Ryung, Ret, and MMA in order to reach the finals where he lost 0-4 to Stephano and took 2nd place.

It was announced on Sept 29, 2011 that Lucky would be going to his first international event, the IPL 3, with his team mate inori.[2]

Lucky played in ASUS ROG Winter 2012, taking first place in his group but losing a surprising match against Strelok. He would defeat Welmu and MaNa to reach the semifinals, but then lose to Polt 3-1. In the 3rd/4th place match he lost against PuMa 3-0 to finish out in 4th place for the event.