Lurker (Legacy of the Void)

This article covers the current multiplayer version of this unit. For other versions see Lurker (Heart of the Swarm Campaign) and Lurker (Wings of Liberty Campaign). 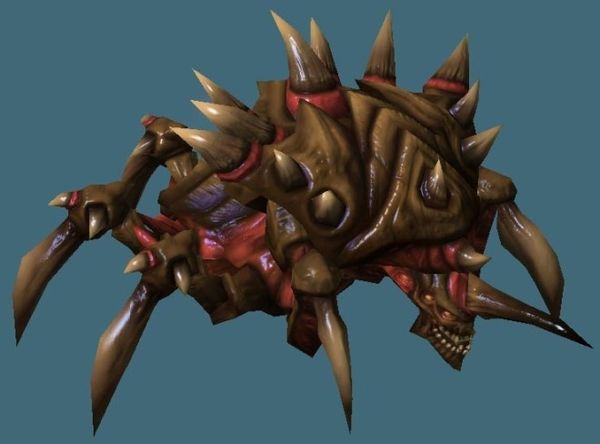 The Lurker is a Zerg unit that may attack only when burrowed and is also able to burrow without the mutation being evolved. A Hydralisk can be morphed to a Lurker when a Lurker Den has been constructed. The Lurker deals damage to all enemy ground units and buildings in a linear attack, similar to a Hellion. Each spine that spikes out of the ground has an individual splash zone with a radius of 0.5. There are 10 spines in the attack that are each offset about 1 full cell from each other from the Lurker to the target unit. There is a 0.125 second delay between each protruding spine, resulting in a full 1.25 seconds to fire an entire line of spines. This makes it possible to dodge the outer spines with reactive micro.

Lurkers are excellent area control and power multiplier units. They can hold ground and take control over tight corridors. Depending on the enemy's composition, they can greatly improve the cost-efficiency of your army. They can also defend against drops and harassment very efficiently and are most effective against slow units or low-health units.

Lurkers are very strong in this match-up: Protoss lack direct counters other than massed immortals. Lurkers can shred a Gateway-based army, and Hydralisk/Roach/Zergling support protects them from other threats such as Immortals and Archons or air units. It is very difficult for a Protoss to engage into a Lurker-based army, moreover, having a Lurker-based army get on top of a Protoss's base is disastrous. Thus, it is important for the Protoss to keep tabs on the Zerg's army's location with scouting units such as the Oracle and the Observer, and important to meet it when it tries to attack. Keep in mind that Lurker-heavy armies aren't very good at engaging directly into enemy armies, because the Lurker must first burrow, giving the Protoss army time to pick off the Lurkers or to retreat.

Contrary to first impressions Disruptors are less useful against this unit. A well-spread line of Lurkers will take at least 2 Disruptors per Lurker, and with the long cooldown of 21.4 seconds, using Disruptors to counter Lurkers takes too long and costs many resources. This in turn gives Zerg enough time to respond. Unlike Immortal/Archon/Zealot which can take a straight up fight against Zerg ground armies.

In Brood War Lurkers were sometimes used to contain enemies behind ramps/chokes and to defend bases. Dropships were not always available, so Terran had difficulty dealing with the Lurkers before Dropships could be built. In LotV, a Terran player is able to build Medivacs earlier than a Dropship was available in Brood War and lift his troops to another location. This strategy is still a factor if there are very few Medivacs on the battle field.

Using Lurkers against Terran can be a bit tricky. Mech compositions can easily deal with Lurkers, unlike in Brood War, because you can't march Lurkers up to Siege Tanks without being destroyed in a matter of seconds, and there are more cost-effective units. Lurkers can be used to help deal with Hellion counter-attacks by placing a few above a ramp. Against bio, although they are particularly powerful against Marines and Marauders, the bio player can easily deal with Lurkers by avoidance, dropping units where the Lurkers aren't and using micro to avoid Lurker spines (although this is tricky). Siege Tanks in bio comps can also force Lurkers back, especially if the player is going for a Roach/Hydra comp, where Siege Tanks would be common. Adding Lurkers in a Zergling composition against bio is dicey, because that means you aren't spending resources on important upgrades, Banelings, Mutalisks, or late-game tech (such as the Ultralisk, which is very powerful against bio). Not to mention how long they take to make and how much they cost.

In Roach vs Roach wars, Lurkers are very potent at holding positions and, when accompanied by another Roach force, can trade extremely efficiently. Players must watch out for enemy Vipers or Ravagers that may snipe the Lurker. Lurkers are also very powerful against a Mutalisk-massing player, since they are usually paired with a lot of Zerglings and Banelings, which the Lurker deals with with ease. This takes pressure off of the rest of the zerg's ground army, allowing it to incorporate squishier Hydralisks to deal with the Mutalisks. Lurkers have some effective use against Ultralisks, thanks to their bonus damage against Armored units. However, if they are not positioned well Lurkers will die faster and will be unable to line up good splash damage against the Ultralisks, as they have a high collision size.