MULE (Legacy of the Void)

This article covers the current multiplayer version of this unit. For another version see MULE (Wings of Liberty and Heart of the Swarm). 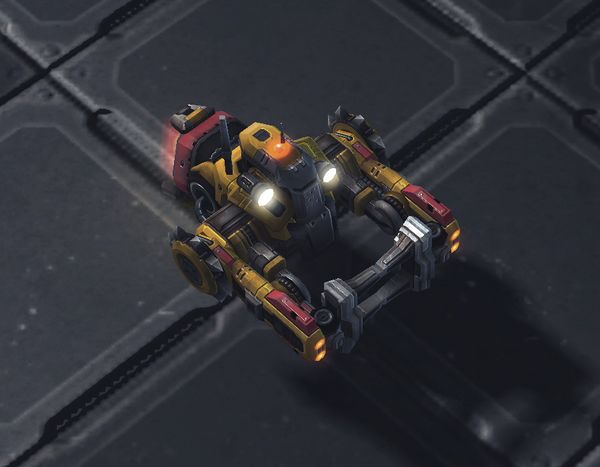 The Mobile Utility Lunar Excavator (MULE) is a temporary unit that can mine minerals (not gas) and repair for the Terran forces. MULEs are called down from the Orbital Command at the cost of 50 energy. They last 64 seconds. If the MULE is cast on a mineral patch it will begin to mine minerals as soon as it spawns. It takes slightly under 64 seconds for an orbital command to generate 50 energy,[1] meaning that a MULE can be called down at almost the same time as the previous one expires.

Despite their timed life and Orbital Command energy cost, a MULE has several advantages over an SCV. A MULE costs no supply. MULEs have a mining time 2.05x longer than an SCV, but have the same movement speed and acceleration. MULEs carry 5 times more minerals per trip than an SCV on normal minerals, gathering 25 minerals per trip on all types of mineral patches. Their timed life allows 8-9 mining trips which totals 200-225 minerals on any mineral patch. A MULE can mine a mineral patch alongside an SCV thus providing extra income on expansions that are already saturated. However, only one MULE at a time can be harvesting a mineral patch.

Please note that MULEs mine the same amount on normal and gold mineral patches.

MULEs can be called down anywhere on the map if the player has vision of the area. There are few instances where doing so in order to scout or repair damaged units would be worth the loss of economy, especially with Scanner Sweep costing the same amount of energy. They can be called down for repairs in the field.

Dropping MULEs in your opponent's base can also be used to humiliate a losing opponent, coercing them to concede.

MULEs are used primarily to keep up with the Protoss' ability to chronoboost probes from the Nexus.

MULE can be used late game when resources aren't as much of an issue in an "all out" type of battle. Call the mules down on enemy tank lines as you move in in order to draw tank fire and allowed enemy tanks to splash damage each other. This is especially good if you can time it right and put that first round of fire from enemy tanks on cool down right as you move in to get that extra edge in the battle. This functions as an expensive Terran version of starcraft:Zealot Bombing.